It is still surprising which emails I get via my website after being ten years online (this October). Readers often ask questions about documents from relatives. “Do you know where I can get a passport copy from my grandmother’s passport?”

I should establish a FAQ section (like suggested by a US fellow collector). Maybe I will do it.

One of the most curious questions came from a man some years ago. “Sir, I need passports for me, my wife, and my two kids. Can you help?” I told him that he completely misunderstood the purpose of my website. And believe it or not. I even had a British senior citizen who wanted to become a Queen’s Messenger at age 68. I could write another book on these stories alone.

But then there are the emails from readers holding different documents. Some want to gain knowledge about the document they possess, and others even want to depart from the papers. Here are some impressions of old passports offered to me in the past. Benjamin Franklin passport mailbox

The latest email came from a US reader writing he owns a BENJAMIN FRANKLIN passport from 23 May 1780. At first, I had my doubts as it could have been a reproduction as a “Passy” passport is not what often comes to daylight. Well, going into a more in-depth discussion with this gentleman, it indeed turned out to be a genuine passport from BF personal press in Paris. I got a photo of the passport and also got explained that Yale University had verified the document. Yale did even a publication about the passport. Based on these facts, I did some further research and found an online source of the BF papers, where I executed some queries. Benjamin Franklin passport mailbox 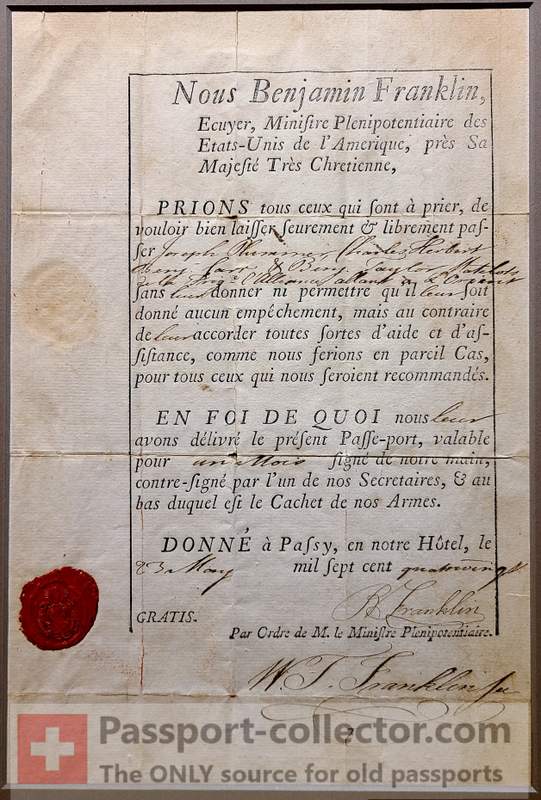 The passport was issued to four persons. Joseph Plummer, Charles Herbert, Benjamin Carr, and Benjamin Taylor. These men were crew members of the USS Alliance, the ship which sailed on the direction of BF to France. The American Philosophical Society and Yale University are going more into deep about the different versions of Franklin’s passports printed in Passy. I will not go into further details yet, but maybe in a separate article.

Passy was the home of Benjamin Franklin during the nine years that he lived in France during the American Revolutionary War. For much of this time, he was a lodger in the home of Monsieur de Chaumont.

Franklin established a small printing press in his lodgings to print pamphlets and other material as part of his mandate to maintain French support for the revolution. He called it the Passy Press.[1] Among his printing projects, he produced comics he called Bagatelles[2] and passports. He developed a typeface known as “le Franklin.” He also printed a 1782 treatise by Pierre-André Gargaz titled A Project of Universal and Perpetual Peace, which laid out a vision for maintaining a permanent peace in Europe. It proposed a central governing council composed of representatives of all the nations of Europe to arbitrate international disputes. And he also printed passport forms.

When Franklin returned to America, the new American Ambassador to France, Thomas Jefferson, wrote: “When he left Passy, it seemed as if the village had lost its patriarch.”[3] To this day, a street in Passy bears the name Rue Benjamin Franklin. Benjamin Franklin passport mailbox

I am delighted that the American gentlemen shared this document with me and granted permission to display this outstanding travel document on my website. As I understood, he inherited the document from his father in law. This passport is real American history, one of the earliest US passports a collector can find -issued only four years after independence.

US passport of a woman with a pretty unique cover 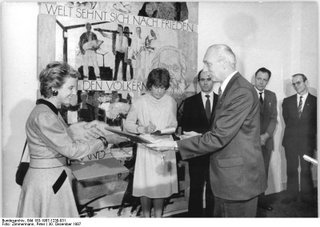 Last Visa French Embassy East-Berlin This document is an East German passport with one of the last visas of the French Embassy in East-Berlin. This visa was issued in April 1990, valid only for five days trip and came at…