Thanks to a fellow collector, I could grab this pretty scarce passport-type from the German Empire / Alsace-Lorraine. This is not an ordinary passport but a substitute-passport as we can read on the cover. It might have been one of the last passports issued in that period. The passport for Joseph Foehr was issued on 7 November 1918, just four days before the Germans signed the Armistice on 11 November at Le Francport near Compiègne, and which ended WWI.

I have never seen this passport-type before, and I would say it’s a pretty rare type. Surprisingly, to find such travel documents after over 100 years. 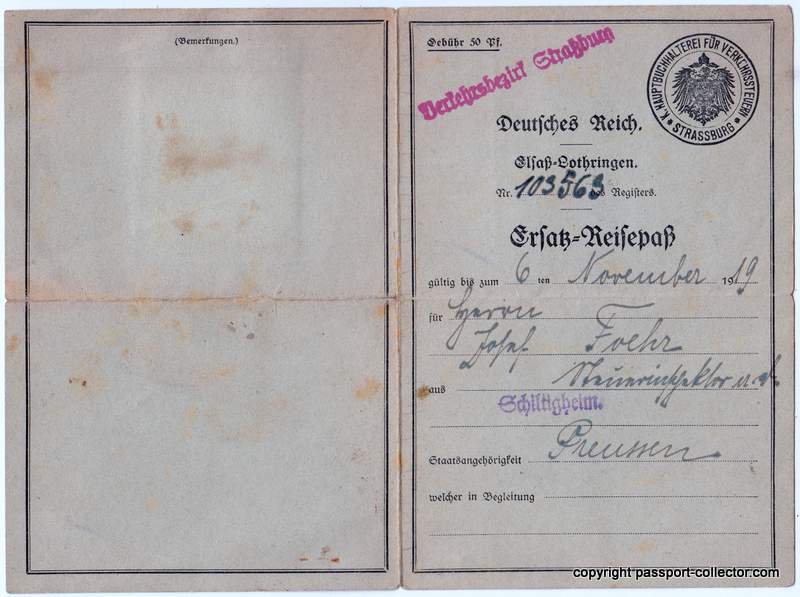 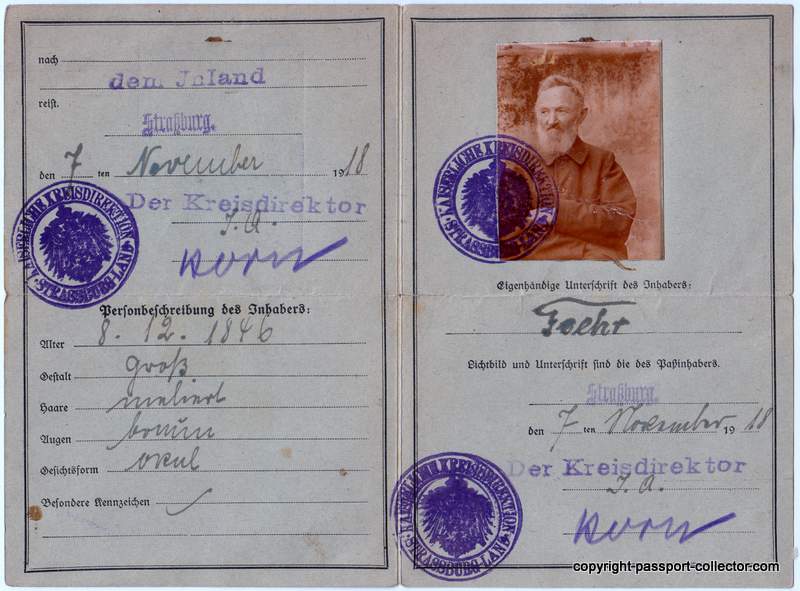 The German Empire collapsed in the November 1918 Revolution with the abdications of its monarchs. Alsace-Lorraine was returned to France in 1919 after World War I. This left a postwar federal republic and a devastated and unsatisfied populace, faced with postwar reparation costs of nearly 270 billion dollars all in all leading to the rise of Adolf Hitler and Nazism.

Alsace-Lorraine, German Elsass-Lothringen, is an area comprising the present French départements of Haut-Rhin, Bas-Rhin, and the Moselle. Alsace-Lorraine was the name given to the 5,067 square miles (13,123 square km) of territory that was ceded by France to Germany in 1871 after the Franco-German War. This territory was retroceded to France in 1919 after World War I, was ceded again to Germany in 1940 during World War II, and was again retroceded to France in 1945.

Under German rule, Alsace-Lorraine was classified as a Reichsland (imperial state) and was denied effective self-government until 1902. Moreover, its population was initially enthusiastic over the new French republic, and German rule remained unpopular for some years among the inhabitants, who continued to protest the German annexation. Thousands of residents who considered themselves French emigrated during this period. By 1905, however, many of Alsace-Lorraine’s Roman Catholics had been alienated by the French republic’s anti-clerical policies. So they shifted their aspirations toward an autonomous Alsace-Lorraine within the German Empire. After that, especially with the grant of a constitution in 1911, some progress was made toward Germanization in the region.

Alsace-Lorraine was returned to France in 1919 after World War I. The French government’s attempts to rapidly assimilate Alsace-Lorraine met with problems, however, especially in France’s plans to substitute state-run schools for the region’s traditional church schools and in its attempts to suppress German newspapers (German being the written language of 75 percent of the inhabitants). As a consequence, Alsace-Lorraine developed a strict “home rule” movement in the 1920s and unsuccessfully sought autonomy within the French Republic.

Early in World War II, the collapse of France in 1940 was followed by the second German annexation of Alsace-Lorraine, which was again returned to France in 1945. Since then, many of the French prewar governmental policies that had clashed with the region’s particularism have been modified, and the autonomist movement has mostly disappeared. Linguistically, the German dialect known as Alsatian remains the lingua franca of the area, and both French and German are taught in the schools.