Sometimes documents look quite ordinary on the first view but turn out to be real treasures on a second, more in-depth look. This happened with this passport of the Federal German Republic from May 1951. A passport-type which was established just that same year a few months earlier in Feb 1951. The bearer of the travel document was Fritz Erich Hans Arlt, born 1 June 1886 in Berlin, Prussia. The validity was original until 1953 but was extended until 1956. I find it very odd that the clerk at the passport office still wrote PRUSSIA in a Federal German passport! German passport border stamps

The curiosity we can see on page six of the passport, two border stamps of the Saarland which was in 1951 not yet a federal state of Germany. It would take another six years before joining the Federal Republic of Germany as a state on 1 January 1957.

Saarland was established in 1920 after World War I as the Territory of the Saar Basin, occupied and governed by France under a League of Nations mandate. The heavily industrialized region was economically valuable due to the wealth of its coal deposits and location on the border between France and Germany. Saarland was returned to Nazi Germany in the 1935 Saar status referendum. Following World War II, the French military administration in Allied-occupied Germany organized the territory as the Saar Protectorate from 1947. After the 1955 Saar Statute referendum, it joined the Federal Republic of Germany. Saarland used its own currency, the Saar franc, and postage stamps issued specially for the territory until 1959. German passport border stamps

The Saarland’s unification with the Federal Republic of Germany was sometimes referred to as the Kleine Wiedervereinigung (“little reunification,” in contrast with the post-Cold War absorption of the GDR (Die Wende)). After unification, the Saar franc remained the territory’s currency until West Germany’s Deutsche Mark replaced it on 7 July 1959. The Saar Treaty established that French, not English as in the rest of West Germany, should remain the first foreign language taught in Saarland schools; this provision was still followed mainly after it was no longer binding. German passport border stamps

The passport includes the original fee slip of 1.50 DM for the extension of the document. A nice addition, fee slips were usually not given much attention, and they were mostly thrown away. 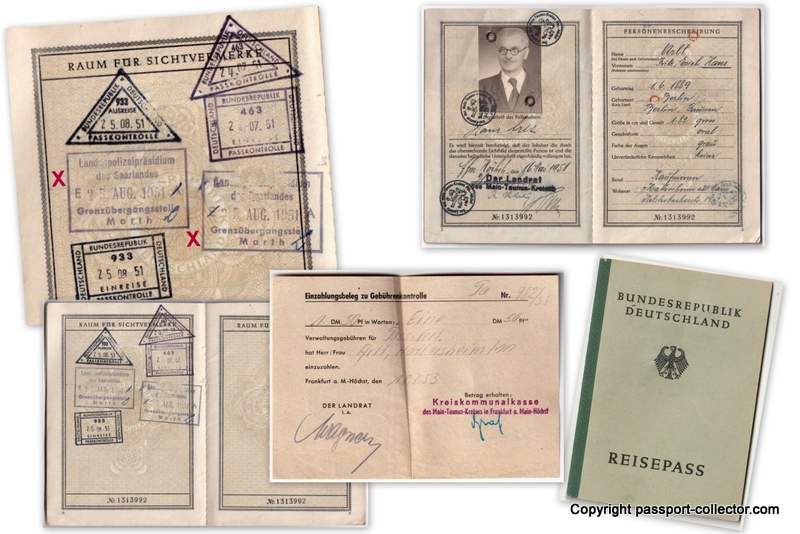 A nice finding of an early Federal Republic passport with these two Saarland border stamps. Always take a closer look at the documents you collect!

Genghis Khan the Inventor of the diplomatic passport Genghis Khan (ca. 1162–1227) and the Mongols are invariably associated with terrible tales of conquest, destruction, and bloodshed. This famed clan leader and his immediate successors created the largest empire ever to exist,…