This city on the Baltic coast (presently the Polish city of Gdansk), was detached from Germany in 1919 by the Treaty of Versailles and became a Free City under the auspices of the League of Nations. It was hemmed in by the German exclave of East Prussia (to the east), the Baltic Sea (to the north) and Poland (to the south and west; a narrow Polish corridor to the Baltic separated Danzig from Germany to the west). 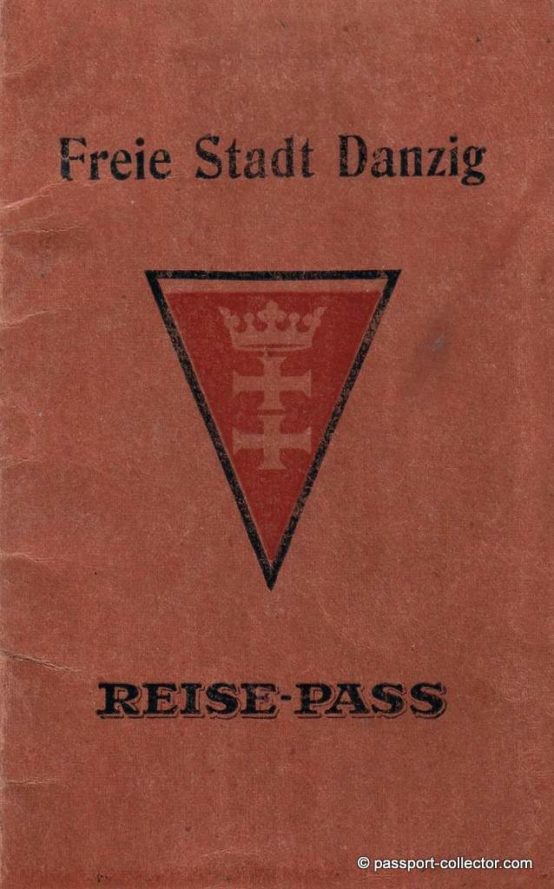 As Poland, after World War One had wanted access to the Baltic, and therefore obtained the Polish Corridor. Additionally, Versailles stipulated that Danzig, mainly German, would manage its own internal affairs, but that its external affairs would be presided over by Poland.

Danzig and the Polish Corridor became focal points for Polish-German tensions, eventually culminating in the German invasion on September 1, 1939 – the start of World War Two. After the war, the German population of Danzig (and other eastern areas) was forcibly moved towards the west, and Danzig became the Polish city of Gdansk (later to gain international prominence as the birthplace of Lech Walesa’s Solidarity movement in the early 1980s). 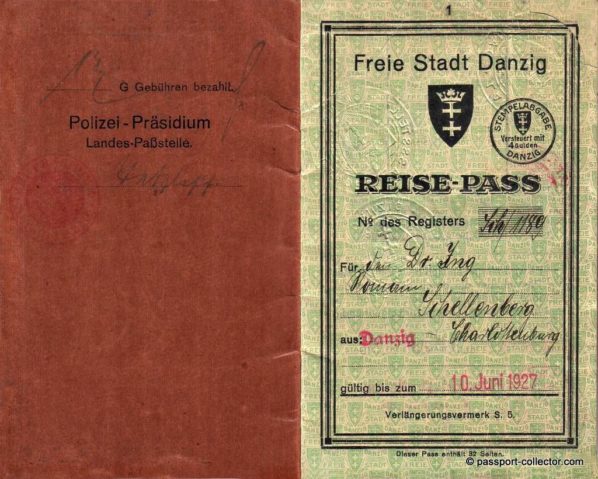 Danzig issued over the years (1920-1939) 3 different types of the passport plus a type for Aliens (which is extremely rare). The passport displayed here is the 2nd type. Over the years I have seen many of these documents. The free city never had more than 400.000 citizens over the years and of course who had a passport back then? Only a small fraction of the population, hence Free City of Danzig passports are rare nowadays.

But let’s have a closer look at this one and we will see this passport has also foreign travels and visas to Switzerland and Italy which is extremely rare! Further unusual findings are the part with the bearer’s signature, it almost looks like cut out from another passport. Interesting is also that applying the blind seal on page 2 with the passport picture made some damage to the page upper corner as probably the sealing tools was just too sharp. 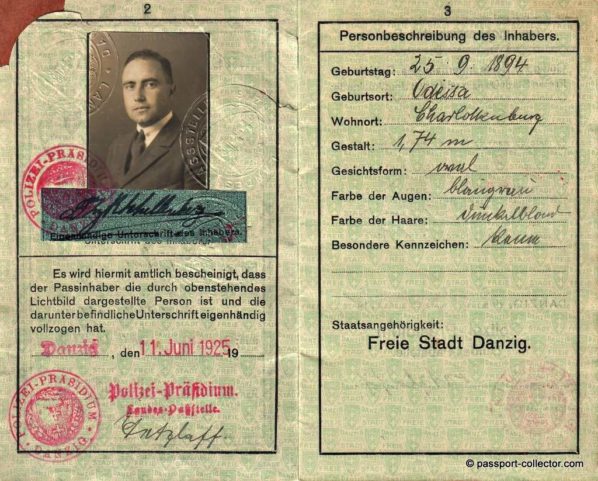 The passport was issued on 11th June 1925 in Danzig, the bearer was born in Odessa. Page 6 shows a residence permit from 1926 issued in Berlin and also in 1925 the earlier mentioned visas to Switzerland and Italy. The last stamp is a border control stamp from Zappot in October 1926.

Doing some research on the bearers name, Roman Schellenberg, I found some entries that he was a long time and loyal friend of German espionage chief Hermann Braun (1897-1951), both were born in Odessa. Dr. Roman Schellenberg was an engineer and working for the German company Rheinmetall, which produced military equipment. Schellenberg past away in 1981 in Berlin.