As the Antiquarian Book Fair London was just at the same weekend as the Ephemera Fair, I decided to spend the whole weekend in London to visit both events and I can tell you already I do not regret my decision at all.

Coming directly from Heathrow airport to the Book Fair was a good idea as on Friday the fair was not that busy and I had my freedom to see everything. My friend Ed joined me later on and we “scanned” the fair for our passion – passports. The most exhibitors had books and manuscripts. But as I was well prepared, I reviewed the exhibitor’s list before and focused on dealers stating in their description “Ephemera.”

Before Ed and I saw the first passports, we saw books of Ian Fleming (James Bond author). First editions had a price tag of 80.000£, and there were many of them. Other books or manuscripts were priced 200-300.000£. Well, how inexpensive is our hobby of passport collecting!

One of the first passports we saw (after asking) was the passport (safe-conduct) signed by James VI of Scotland to Sir John Vans of Barnbarroch and a companion for seven years of travel in France, Flanders, Germany, and Italy. JAMES VI became the later JAMES I., King of Scotland in 1602. Price tag: 4000£.

Then we saw a small stand of a dealer, and I was asking if he had something on passports. He said he does not have any, but he has a SCHUTZPASS and if I know what that is. I replied I know precisely what it is. He uncovered a WALLENBERG SCHUTZPASS!!! WOW!!! Such a document at this fair? BIG SURPRISE!

We sit down for a detailed inspection of the documents, and I was blown away. There was not only the SCHUTZPASS there was also the original copy of the document which usually is kept at the Embassies archive plus another document confirming a provisional passport for a lady. I was interested. Hey, to acquire a WALLENBERG you don`t think twice. However, I did and arranged another meeting the next day. 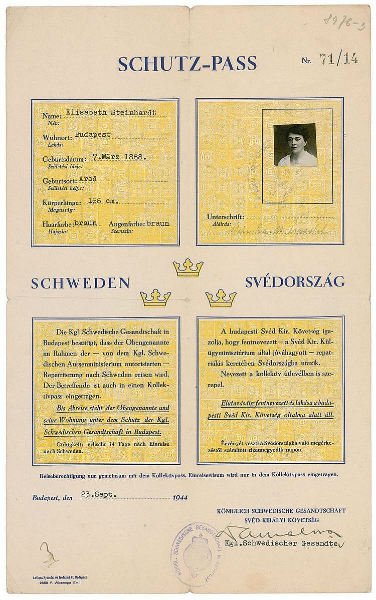 Back at my room in Kensington I did some research and found what I was looking for. When I saw the document at the fair, instantly there was something in my mind. Did I saw this document before? YES, I did. It was precisely the Wallenberg who was withdrawn in an auction end of 2011 in the US. Same name, same date, and same SCHUTZPASS NUMBER.

At the next day, the dealer confirmed my research and told me he just bought the documents in London. After hard negotiation, we found a suitable price. Gosh, was I nervous to spend such an amount of money but I have now a genuine WALLENBERG SCHUTZPASS! The trip to Antiquarian Book Fair London was already a big success.

Looking for something special?
Drop me a line, I can support you.