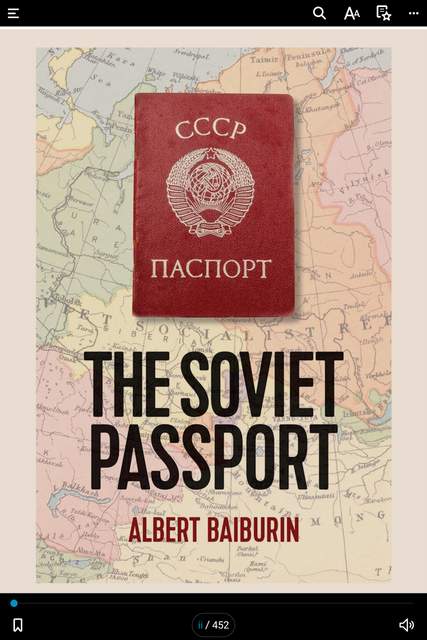 Books on passport history are limited, and it’s always fantastic when a new book on the topic comes up. Albert Baiburin’s book about THE SOVIET PASSPORT was published in 2017 in Russian and, since Nov 2021, has also been available in English as a print version and ebook. I prefer to read ebooks as no shipping is needed for bulky, heavy books, plus functions like keyword search, bookmarks, or references are very convenient. Book Soviet Passport Baiburin

The Soviet passport, introduced in 1932, implicitly contained the demand that the individual identifies him- or herself according to the descriptions laid down within it. In Soviet legal practice, permission to cross state borders was possible only with a ‘foreign travel passport.’

The ‘internal’ passport was a particular phenomenon. Its primary role was to certify a person’s identity, but it was used for far more than simply this. A vast body of evidence illustrates that without it, a person literally ‘disappeared’ from the life of their society. It was impossible to find employment or place your child in a kindergarten or a school; a person could not marry or ultimately die ‘correctly’; or even fulfill what seemed such simple practices as obtaining a library ticket or picking up a parcel from the post office. It was essential on virtually every occasion when there was contact with officialdom (including obtaining any other documents) because it was always necessary to prove that the citizen was the person they claimed to be. Book Soviet Passport Baiburin

The Formation of ‘the Passport Portrait’ in Russia, to this day, is associated by most Russians as ‘the passport’ as an identity document that all Russian citizens aged fourteen and over must hold. (Until 1997, internal passports were issued only from the age of sixteen.) Only about 20 percent of Russians today have a passport for foreign travel.

The actual word ‘passport’ signified a permit to pass through the gates of a city. The term became established in Russian usage only from the beginning of the eighteenth century, but this does not mean that such documents did not exist before this. To travel within Russia, foreigners (principally merchants) were issued letters of passage.

They are known to have been in use at the end of the sixteenth and beginning of the seventeenth centuries, but officially they were brought in only by decree of Tsar Peter the First in 1719 (Peter the Great, reigned 1682–1725). They contained the following details: name (or alias); the starting point of the journey; intended destination; title or rank (or occupation); details of any family members traveling with the bearer. Book Soviet Passport Baiburin

The foundations of the modern Russian passport system were laid down under Peter I. In his Decree of 30 October 1719, the word ‘passport’ (to be exact, pashport) is first used to describe a document confirming identity. Under Empress Catherine II, passports were used to control where settlers from European countries could live. Under Tsar Nicholas I (reigned 1825–55), the number of essential details for confirming a person’s identity continued to grow. Alexander II created a Passport Commission under the chairmanship of the Interior Minister, Sergei Lanskoy, which was tasked with simplifying the existing passport regime.

In the final two decades of the existence of the Russian Empire, the primary document which confirmed a person’s identity was the ‘passport booklet,’ which was brought in by the Supreme Decree of 5 October 1906. 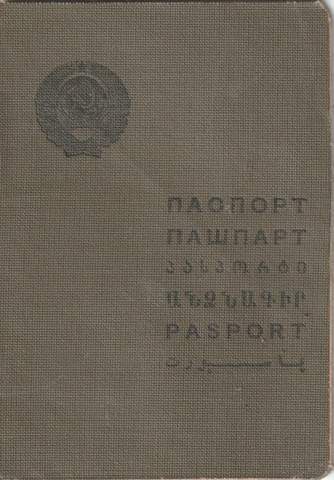 The new passport system was brought in by Resolution number 57/1917 of the Central Executive Committee (TsIK) and the Sovnarkom (SNK) of the USSR on 27 December 1932. According to the plan set out in 1933, the introduction of passports should essentially have been completed in 1936. On 4 September 1937, the Deputy People’s Commissar for Internal Affairs, Vasily Chernyshov, reported to Vyacheslav Molotov: In total, passports had been issued to the whole population of the USSR, that is (in round numbers) 50,000,000 people. Book Soviet Passport Baiburin

With the initial stage of the passport process completed, the NKVD set about perfecting the passport regime and extending it to other territories.

The introduction of the passport system had divided the country’s whole population into those with passports (basically, the urban population) and those without (mainly the rural population); and with time, this division was felt ever more intensely. Reform Projects started in the 1960s. The question of a universal passport system came up again in 1967, linked to a Report from the First Deputy Chairman of the USSR Council of Ministers, Dmitry Polyansky, to the Central Committee of the CPSU.

The last Soviet Statute on Passports (1974), which the commission under the chairmanship of Kirill Mazurov worked on, was remarkable not only because it extended the issuing of passports to the whole population. It was also the first time that the document acquired the title, ‘Passport of a Citizen of the USSR.’ It was decided to start the universal issuing of passports in 1976 and complete it by 1981. This was the most extensive campaign to have taken place since passports were first issued at the beginning of the 1930s. Book Soviet Passport Baiburin

As before, issuing new passports was accompanied by measures to try to uncover any violations of the passport system: Between 1976 and 1980, 3,200,000 passports and other documents were collected for special examination. There was reason to doubt that these documents were genuine or belonged to the person named in them, and there was also evidence of forgery. During this investigation, a list was drawn up of 10,600 wanted criminals. Over the five years, more than 66,000 criminals were apprehended; 436,000 people had defaulted on payments to the state, and 105,000 had failed to pay fines imposed by state or social organizations.

The move from the Soviet passport system to the Russian one laid bare all the sensitive issues that the changes were meant to heal. The new, now Russian, passport differed significantly from the Soviet one – not simply in terms of designation, design, and layout, but the ‘passport portrait.’ Book Soviet Passport Baiburin

Albert’s book of 452 pages is a detailed description of the Soviet passport system, and I highly recommend his book.

In this context, it is also worth noting the authoritative study by Valentina Chernukha of the development of the Russian passport over two centuries, from 1719 to 1917. I wish her book would be available in English too.

As a member of the Ephemera Society of America I was pleased to publish another article on historical passports. I still remain the only society member handling this topic of researching and collecting old (historical) passports.Maybe one day I will…