You see here a marvelous travel document from British Jamaica issued to a young soldier in uniform in 1953, well before Jamaicas’ independence in 1962. Attractive is also the revenue stamps on page one. His passport was valid for the British Empire, the United States of America, France, and Mexico. The documents’ initial validity was renewed later until 1963. Attached to the passport is an examination card of the bearer – Baron Wilberforce Everan Mapletoft Duncan. 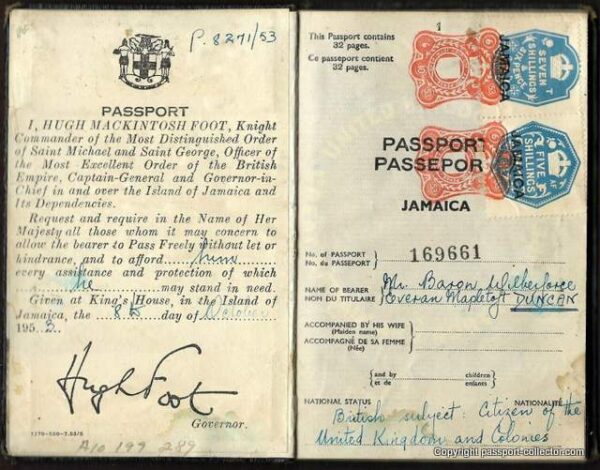 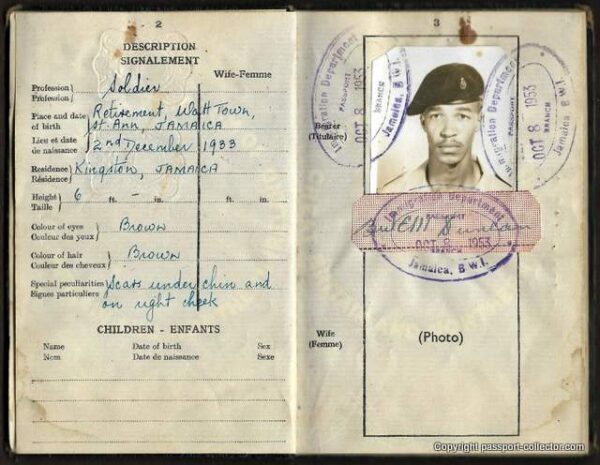 In 1955 the American Consulate General in Kingston, Jamaica, issued him a Non-Immigrant visa, furthermore several stamps, including Canada in Aug 1962, the USA in Sep 1962 (after Independence). The Jamaican immigration stamp from 1972 is not clear for me as his passport was then already expired (since 1963). There is also a US immigration stamp from 1978 – fifteen years are his passport was expired! 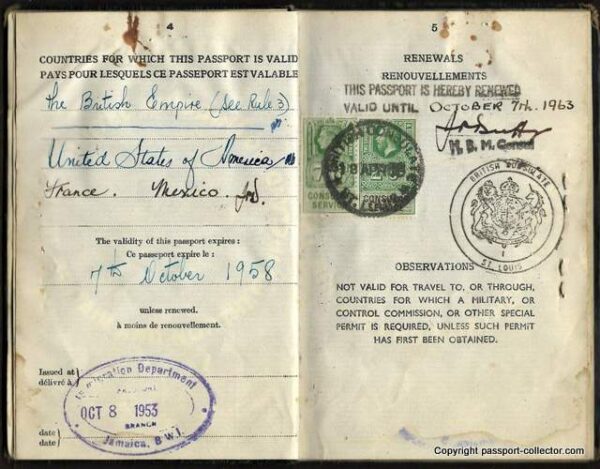 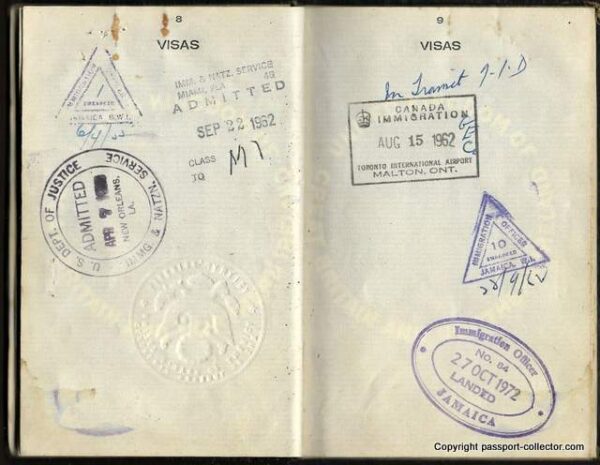 As World War II came to a close, a sweeping movement of decolonization overtook the world. British Government and local politicians began a long transition of Jamaica from a crown colony into an independent state. The political scene was dominated by PNP and JLP, with the houses of legislature switching hands between the two throughout the 1950s. After Norman Manley was elected Chief Minister in 1955, he sped up the process of decolonization via several constitutional amendments. These amendments allowed for greater self-government and established a cabinet of ministers under the Prime Minister of Jamaica.

Under Manley, Jamaica entered the West Indies Federation, a political union of colonial Caribbean islands that, if it had survived, would have united ten British colonial territories into a single, independent state. Jamaica’s participation in the Federation was unpopular, and the results of the 1961 West Indies referendum held by Premier Manley cemented the colony’s withdrawal from the union in 1962. The West Indies Federation collapsed later that year following the departure of Trinidad and Tobago.

In the elections of 1962, the JLP defeated the PNP, resulting in Alexander Bustamante’s ascension to the premiership in April of that year. On 19 July 1962, the United Kingdom Parliament passed the Jamaica Independence Act, granting independence as of 6 August with The Queen as Head of State. On that day, the Union Jack was ceremonially lowered and replaced by the Jamaican flag throughout the country. Princess Margaret opened the first session of the Parliament of Jamaica on behalf of The Queen. With Jamaica’s independence, the Cayman Islands reverted from being a self-governing territory of Jamaica to direct British rule.

Sir William Alexander Clarke Bustamante GBE PC (born William Alexander Clarke; 24 February 1884 – 6 August 1977) was a Jamaican politician and labor leader, who, in 1962, became the first prime minister of Jamaica until 1967. While independence is widely celebrated within Jamaican society, it has become a subject of debate. In 2011, a survey showed that approximately 60% of Jamaicans “think the country would be better off today if it were still under British rule,” citing years of social and fiscal mismanagement in the country.