This beautiful travel document comes in a burgundy leather wallet in excellent condition. Issued in London on 7th May 1892 and has stamps from Germany and France. The bearer, Halswell Milborne Kemeys-Tynte was born in 1852. He was the son of Charles Kemeys Kemeys-Tynte and Mary Frome. He married Rosabelle Clare Walsh, daughter of Theobald Walsh and Isabel, on 25 September 1875. He died on 18 February 1899.

His son was Charles Theodore Halswell Kemeys-Tynte, 8th Baron Wharton JP (18 September 1876 – 4 March 1934). Son of Halswell Milborne Kemeys-Tynte. He was a JP Monmouth & Somerset, hon Lieutenant in the Army 1915–1918. Formerly Lt Royal Monmouthshire R.E. The abeyance of the Barony of Wharton has terminated in his favor by Writ of Summons to Parliament 15 February 1916. Married 1899 Dorothy Ellis and had issue John Kemeys-Tynte, 9th Baron Wharton and Elisabeth Kemeys-Tynte, 10th Baroness Wharton. 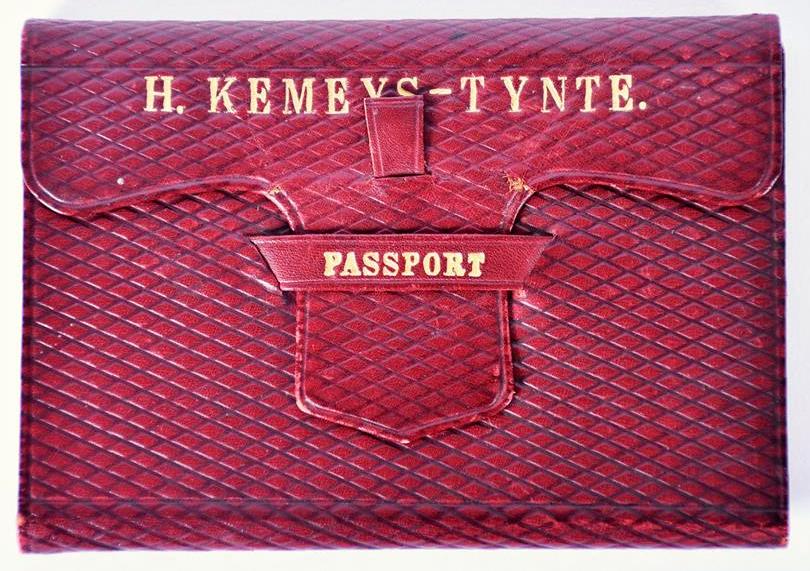 These leather wallets were always individual work at extra costs, mostly arranged by passport agents. So far I could identify 3-4 different wallet makers in London at these times. However, I never saw a burgundy one. A great piece of passport history in excellent condition. 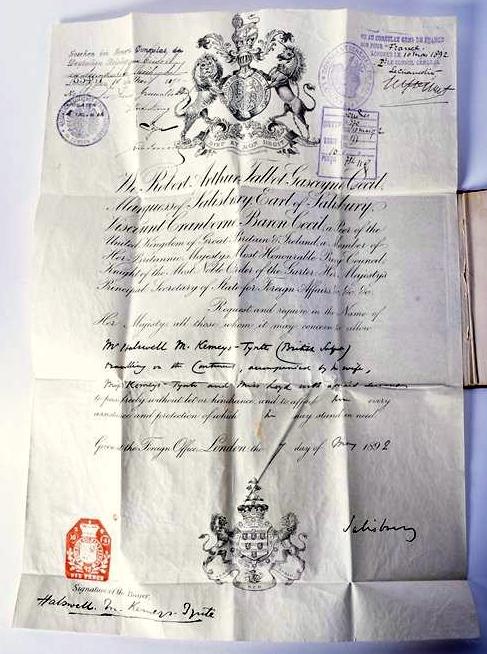 The Wharton Barony passed into the Kemeys-Tynte family in 1916 due to the seventeenth-century marriage of the Hon. Mary Wharton (d.1699) and Sir Charles Kemeys, 3rd Bt. (d. 1702). Hon. Mary Wharton was the daughter of the 4th Baron, and aunt to the 1st Marquess of Wharton. The 2ndMarquess and 1st Duke of Wharton was a colorful character who due to his spendthrift character and Jacobite loyalties was deemed an outlaw and his titles were proclaimed forfeit in 1729. Though his sister Jane Wharton, 7th Baroness Wharton (1706–1761) became his sole heir in 1739 and held onto this older family title, on her death the title went into abeyance. It was only to be revived in 1916 by Charles Kemeys-Tynte (1876–1934) petitioning the House of Lords that the title could in fact pass through the female line, and therefore pass to the last prime descendent of the Wharton’s, via Hon. Mary Wharton, which was himself. 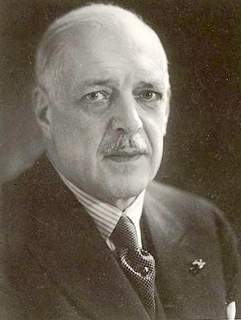 Sureley a significant document of Dutch (passport) history which you can see yourself at the Philips Museum in Eindhoven. Anton Frederik Philips (14 March 1874 – 7 October 1951) co-founded Royal Philips Electronics N.V. in 1912 with his older brother Gerard Philips in Eindhoven, the Netherlands. His father…