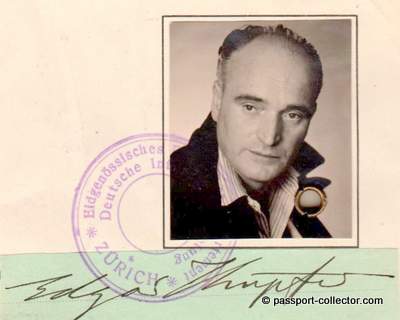 On May 11, 1945, just three days after the German capitulation, the US-Missions in Bern, Stockholm, and Madrid requested access to the German Diplomatic Archives. A “diplomatic note” to Switzerland was sent five weeks later on June 18, 1945, when the “Deutsche Interessenvertretung in der Schweiz” (German Interest Section in Switzerland) was already established. The “Deutsche Interessenvertretung in der Schweiz” was a unique construction as it was created as part of the Swiss Foreign Office. The former German Consular staff was working under the leadership of the Swiss Government. The Head of this department was Swiss Diplomat Hans Zurlinden, and the office was located at the former German Consulate in Bern. Zurlinden, together with his Swiss and German staff, promised to fulfill his task in a “good Swiss and correct manner”.

With the diplomatic recognition of Germany by Switzerland on March 16, 1951, this unique construct came slowly to its end. The complete archive was transferred back to Germany in May 1952, and the “Deutsche Interessenvertretung in der Schweiz” was obsolete by April 1953. New york times

You see here the ERSATZPASS (replacement passport) of writer Edgar Max Kupfer (Kupfer-Koberwitz). The document was issued in Zürich on September 24, 1948, by the Swiss Political Department for German Interests in Switzerland and was several times extended. His passport has two visas issued by the ALLIED HIGH COMMISSION, OFFICE IN BERNE, including 2 x $2 AMG revenues. A highly exciting and rare document of early post-war area. 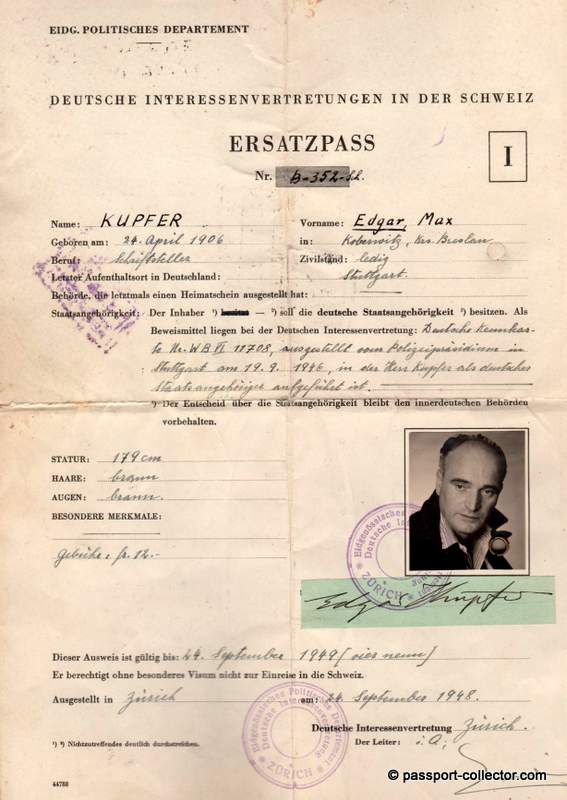 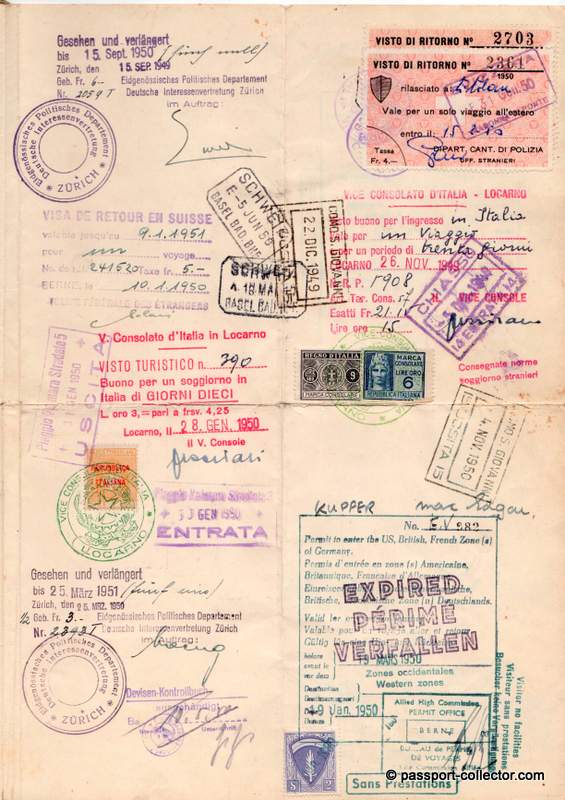 Thanks to an attentive reader of my website, I got this additional information on the document I own. So here is the update on the writer of the “Dachau Diaries,” his tragic life, and denied success of his diaries. Kupfer Koberwitz Dachau Diaries

Edgar Kupfer was born in the town of Koberwitz, Germany, on April 24, 1906. He received his education in various cities across that country, including Bonn, Regensburg, and Stuttgart. When his parents were divorced, Edgar left school to support his mother and sister. He remained with them and worked various jobs in factories, stores, and banks. Kupfer’s parents were later reconciled, and in the aftermath of a disappointing love affair, Kupfer left Germany for Italy in 1925. Between 1925 and 1940, he moved between Germany and Italy, working in many types of jobs, including for newspapers, travel bureaus, and as a model for a sculptor of monuments.

In 1940, Kupfer was taken into custody by German police as an enemy of the German state, presumably for his pacifist ideology. He was imprisoned in the Dachau concentration camp for the duration of World War II. By pretending to be simple-minded, Kupfer received a clerk’s job in the camp’s storeroom, which allowed him to begin a diary clandestinely. He recorded incidents of concentration camp life on tiny slips of paper. He hid the pages of his journal from prison guards by concealing them among business papers. He later buried them, where some of the pages sustained water damage.

While at Dachau, Kupfer continued to practice the vegetarianism he had embraced years before, dividing his meat ration among fellow prisoners. In his diary, he explained his belief that humans’ ability to deny the humanity of others cruelly stemmed from the widespread brutality of humans towards animals. He said, “I believe as long as man tortures and kills animals, he will torture and kill humans as well—and wars will be waged—for killing must be practiced and learned on a small scale. We should try to overcome our own small thoughtless cruelty, to avoid it, and to abolish it.” During his regime, in an attack on pacifist organizations, Hitler banned all vegetarian organizations and arrested their leaders in German-occupied territories. New york times

And in this hell of Dachau Concentration Camp, he performed a masterpiece the world does not remember: despite the eternal fear and unannounced controls of the SS, he managed to keep a diary of events in Dachau under constant threat of death at the time of its discovery since November 1942, and this manuscript is 1900 pages long!

His greatness was manifested in infinite benevolence and compassion for all living beings, even in times of captivity, when the man quickly collapses under the weight of fear of pain and death. There are very few such people who would remain steadfast even in the most difficult circumstances and would be willing to help their fellow man, to sacrifice for him, even at the cost of death. Koberwitz was one of them. New york times

Terrible harassment and humiliation could not bring him to life, he remained a MAN who helped everyone, even if sometimes only with a word. He was not hindered by national, racial, linguistic, religious, or social prejudices. In all the inmates he saw only suffering people who should be helped. In his compassion and thinking, he did not limit himself exclusively to man – he recognized life companions in all living beings.

He was a staunch vegetarian and adhered to this diet even in the desperate conditions of captivity, where you were not only mentally but also physically exhausted. In 1941, after returning from the Neuengamme camp (he was temporarily transferred), he weighed only 44 kg.

He handed over a piece of meat to his colleagues in case he was swimming in the already poor soup. moreover, he also knew how to listen to his body, and in case of illness, he used an ancient, tried medicine: after three days he fasted! There are 75 testimonies of fellow prisoners about the personality of Koberwitz, here is a small selection: New york times

“Kupfer has always been a good companion. I can describe his behavior as extremely selfless, as he sacrificed his last piece of bread during the so-called periods of famine if he could help anyone. As a man, he was an example in every way. He could not harm any animal, let alone man. ”(Peter Bach, prisoner 27185, Piesbach, Germany)

“ I have known him for 3 weeks. There was an honest comrade in our room, always ready to help. Being a vegetarian (so he claimed), he waived his meat meals as well as meat soups to the patient. When his colleagues brought him vegetables, salad, carrots, and herbs, he also gave them up in the mentioned cases. If anyone asked him for a favor, he did everything he could. ”(Pierre André, prisoner 101694, farmer, St. Marguerite, France)

Despite nearly being consumed by typhus, Kupfer survived his imprisonment at Dachau and was among the more than 67,000 prisoners liberated by American forces on April 29, 2945. Kupfer expressed his gratitude at having evaded death in the camp: “The day is over, this April 29, 1945. I will celebrate it for the rest of my life as my second birthday, as the day that gifted me life anew.” Vowing to use his writings to publicize his experiences and views, Kupfer attained the assistance of Thomas Emmet of the Counter Intelligence Corps to save his manuscript from deterioration in its hiding place. New york times

Kupfer took great pains to establish the genuineness of his manuscript. To demonstrate its authenticity, he unearthed it in the presence of Counter Intelligence Corps agents. Kupfer also created and circulated a questionnaire among former Dachau inmates, gathering statements about his behavior in camp and his general trustworthiness. The Dachau Diary was serialized in the journal “Aus Politik und Zeitgeschichte “under the title “Als Häftling in Dachau.” From his Dachau notes, Kupfer also wrote an essay on vegetarianism, which was published in the book Radical Vegetarianism, written by Mark Mathew Braunstein in 1981.

Kupfer, a resident of Chicago in the postwar period, donated his diaries to the University of Chicago on April 1, 1954. On July 7, 1991, Edgar Kupfer-Koberwitz died aged 85 in an anthroposophic nursing home near Stuttgart, Germany.

Further reading: The University of Chicago Library-Guide to the Edgar Kupfer-Koberwitz Dachau Diaries 1942-1945

Swissair Chief Pilot Ernst Nyffenegger Passport Outstanding aviation document from the early beginning of the Swiss carrier – SWISSAIR! Today is known as SWISS (which belongs to Lufthansa). I found another picture from Nyffenegger as a young pilot in 1927…

The United States passport of Eartha Kitt is up for sale on an online platform. The seller is asking $5600 but delivers a very weak description of the document and even more blurry photos. It seems he doesn’t care much…