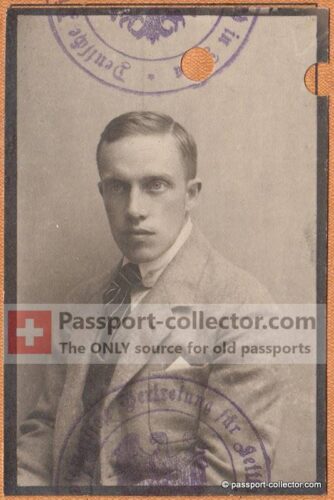 The following passport is of the utmost importance in German history as its bearer was a conspirator in the German Resistance and a member of the 20 July plot against Hitler. Not often, a collector gets the chance to get in possession of such a document, and when you get such a possibility, you don’t think twice – you grab it! This document is another highlight of my German collection. I am delighted to have it.

Ernst Munzinger (July 06, 1887 – April 22/23, 1945), Businessman and Lieutenant colonel). After the First World War, Ernst Munzinger supported the growing National Socialist movement in his home country, Latvia. In 1933 the Latvian government expelled him from the country, and he spent the following years in Berlin. At the beginning of the Second World War, Munzinger was drafted to counterintelligence under Admiral Wilhelm Canaris, where he contacted the group around Hans Oster and Hans von Dohnanyi. After the unsuccessful assassination attempt of July 20, 1944, he was arrested by the Gestapo and held in Lehrter Straße Prison in Berlin. On the night of April 22-23, 1945, just a few hours before his release, a special detachment from the Reich Security Main Office murdered him with other prisoners on factory grounds near the prison.

Munzinger, son of a brewer, wanted to be after the end of his school career journalist. He emigrated to his father’s wishes in 1883 from Zweibrücken (Germany) to Riga (Latvia). He began studying law at the Ludwig-Maximilians-University Munich. In 1910 he became a member of the Corps Isaria. He broke off his studies, enlisted in the Bavarian Army, and served with the Royal Bavarian Infantry Regiment “Prince William of Hohenzollern,” No. 22 in Zweibrücken. After the First World War outbreak, the Munzigers family was expelled from the Russian Empire and moved to Berlin. Munzinger was initially on the Western Front and later used as an intelligence officer on the Eastern Front. Munzinger reached the rank of captain and was awarded two Iron Crosses.

After the war, he went back to Riga together with his father (this passport was issued in Riga in 1921). Munzinger married in 1920. The marriage produced a daughter. Munzinger built up a chemical factory in Riga after the completion of commercial training. After the takeover by the Nazis in the German Empire, he was expelled because he openly sympathized with National Socialism. Munziger moved with his family in 1933 to Berlin, where he led with his brother-in-law, the Department of Clothing and Textiles. After the Kristallnacht, Munzinger averts from National Socialism because of the riots against Jews.

During the Second World War, Munziger was at the Supreme Command of the Wehrmacht (OKW) and worked as an intelligence officer, where he was assigned to the defense under Wilhelm Canaris. Munzinger came later in contact with the resistance group led by Hans von Dohnanyi, Hans Oster. The rank of lieutenant colonel in the spring of 1944 ended his service in the Wehrmacht, and Munzinger returned to civilian life. Munzinger was already at that time informed about the planned assassination of the 20th in July 1944. Its role in the preparations is unknown. Ernst Munzinger Passport – Member of the 20 July Plot

After the failure of the assassination of 20 July 1944, Munzinger was arrested by members of the SS in Salzburg and sent to the prison cells Lehrterstrasse in  Berlin. During the Battle of Berlin, Munzinger was shot together with 14 other Resistance fighters during the night of the 23rd April 1945 by Gestapo members at nearby factory premises in the Invalidenstrasse. His body was buried in a mass grave in Alt-Moabit but later transferred to the St. Paul’s Cemetery in Berlin-Plötzensee. Ernst Munzinger Passport – Member of the 20 July Plot