Did You Ever Hear About Kiribati in the Pacific Ocean? I have to admit I needed to do some research when I got this document offered. KIRIBATI? Kiribati passport
Well, Kiribati is an island nation in the central tropical Pacific Ocean. The permanent population is just over 100,000 (2011) on 800 square kilometers (310 sq mi). The nation is composed of 32 atolls and one raised coral island, Banaba, dispersed over 3.5 million square kilometers, (1,351,000 square miles) straddling the equator, and bordering the International Date Line at its easternmost point. Kiribati was admitted as the 186th member of the United Nations in September 1999. So this is a pretty rare passport and it comes also in excellent condition! Kiribati passport 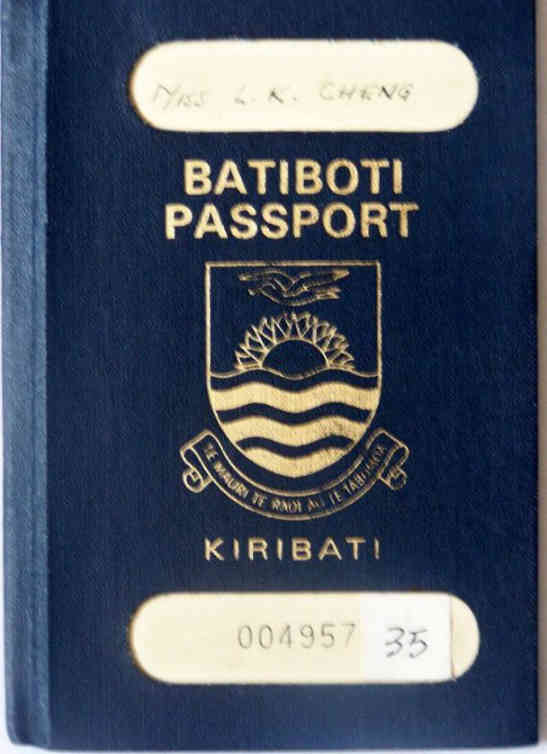 Kiribati, an island republic in the Central Pacific, comprises 33 coral atolls and isles stretching along the equator. With lagoons and white-sand beaches, many of its islands are uninhabited, offering a remote setting for fishing, diving, and bird-watching. The crowded capital, South Tarawa, made up of small islets, retains remnants of WWII battles fought on its shores and is known for folk dancing and handicrafts. Kiribati passport

Until recently, the people of Kiribati mostly lived in villages with populations between 50 and 3,000 on the outer islands. Most houses are made of materials obtained from coconut and pandanus trees. Frequent droughts and infertile soil hinder reliable large-scale agriculture, so the islanders have largely turned to the sea for livelihood and subsistence. Most are outrigger sailors and fishermen. Copra plantations serve as a second source of employment. In recent years large numbers of citizens have moved to the more urban island capital of Tarawa. Increasing urbanization has raised the population of South Tarawa to 50,182. Kiribati passport

The current passport of Kiribati costs a USD $112 processing fee.