by Duke Emmanuel-Armand du Plessis de Richelieu, former Governor-General of Yekaterinoslav, Kherson, and Taurida (1805-1814), Mayor of Odesa (1803-1814), in 1818 French Minister of Foreign Affairs and President of the Council of Ministers, bearing the Duke’s own signature. For Abbe Raynaud (in fact: Reinaud), Secretary to (Joseph-Marie) Count Portalis (future  Minister of Foreign Affairs in 1829), heading a French delegation to the Holy See. French Diplomatic Passport Richelieu 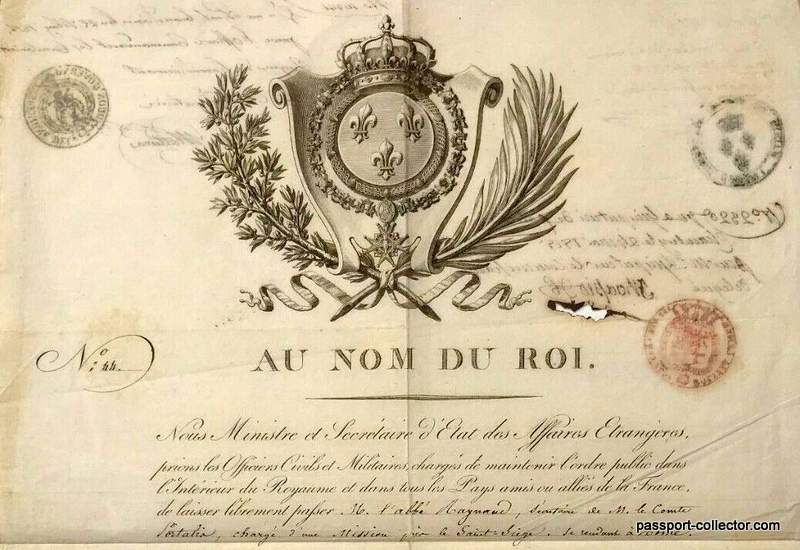 Armand-Emmanuel Sophie Septimanie de Vignerot du Plessis, 5th Duke of Richelieu and Fronsac (25 September 1766 – 17 May 1822), was a prominent French statesman during the Bourbon Restoration. He was known by the courtesy title of Count of Chinon until 1788, then Duke of Fronsac until 1791, when he succeeded his father as Duke of Richelieu. French Diplomatic Passport Richelieu

As a royalist, during the French Revolutionary Wars and Napoleonic Wars, he served as a ranking officer in the Russian Imperial Army, achieving the grade of major general. Following the Bourbon Restoration, he returned to his homeland and was twice Prime Minister of France. 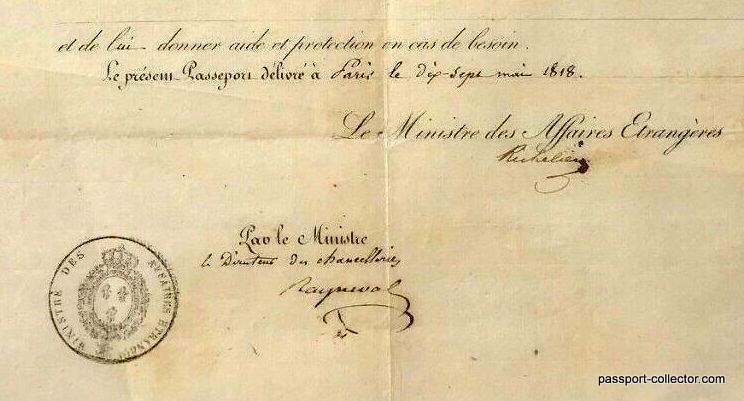 On the reverse, visas of French Carabiniers in Le Pont-de-Beauvoisin and of French Police on the other side of the border in Chambéry (then a Sardinian city), as well as two Sardinian stamps. On very fine paper and in very good condition (except for a scratch resulting from a signature on the reverse). 39 cm x 29 cm. 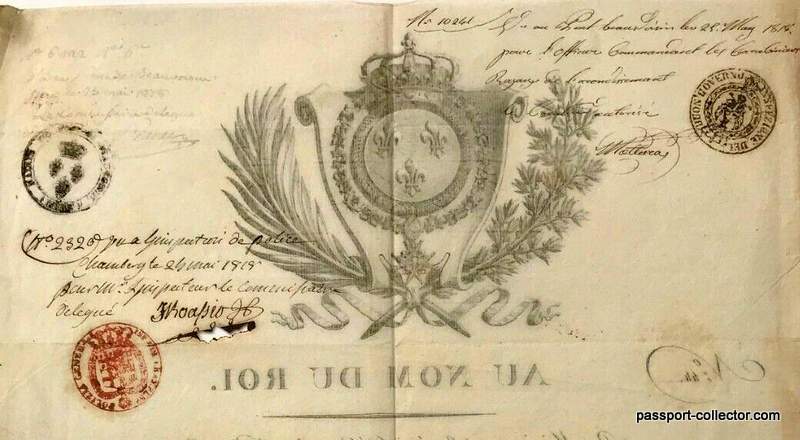 Abbe Joseph Reinaud, bearer of this diplomatic passport, was at a later stage appointed to the French Embassy in Rome (Holy See).  He subsequently established a famous record and description of the vast collection of antiquities of Pierre-Louis Count de Blacas, Ambassador of France to the Court of the Kingdom of Two-Sicilies (1814-1817) and to the Holy See (1817-1828). French Diplomatic Passport Richelieu

Swissair Chief Pilot Ernst Nyffenegger Passport Outstanding aviation document from the early beginning of the Swiss carrier – SWISSAIR! Today is known as SWISS (which belongs to Lufthansa). I found another picture from Nyffenegger as a young pilot in 1927…