Subject: 19th Century French Passport
This is a very unusual passport in that it is dated 1801 and printed on sheepskin. The owner contacted me to help him place an insurance value on it because he now lives in Houston, TX, not Paris. Can you help a little bit? Please. The dimensions are 19″ x 21″ for the piece of sheepskin only. french passport sheepskin 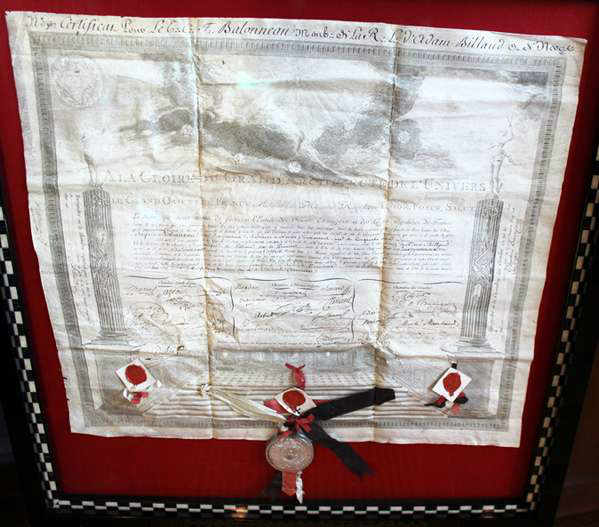 Answer:
This is definitely NOT a passport nor is it made from sheepskin! This is some kind of certificate or diploma, most probably a freemason’s degree. An early 19th-century passport looks very different and is much smaller. This document you have has a huge format and looks very decorative with all the seals and so many signatures which is unnecessary for a passport. Such a document as a passport would be also very impractical to travel with. If you look at the document’s margins you see small missing fractions which are typical for vellum. Skin is an organic material and was by my best knowledge NEVER used to issue a document. Why would somebody do that? Again – this is not a passport! I would see it as some kind of diploma, certificate, etc, and would estimate the value around $200/300. french passport sheepskin

Reply:
Dear Tom. Thank you for your expertise.  I appreciate your reasoning and will convey all your information to the owner.  You have certainly made a study of this particular collecting area and I will pass on information about you.  This is very important information. I look forward to watching your newsletters and who knows, may have something for you to collect in the future. Kind thanks, S. french passport sheepskin

In the past, I had also a US guy stating ” …and finally the passport is signed with blood”! What? Well, what he meant was the red wax seal!

So you learned today less about passports but more about sheepskin, wax, and blood. french passport sheepskin