Galeazzo Ciano, dei conti di Cortellazzo, was born on 18 March 1903 at Leghorn, the son of Admiral Costanzo Ciano, an Italian hero of World War I and an early supporter of Mussolini. After gaining his degree young Ciano dabbled for a time in journalism and then in 1925 entered the Italian diplomatic service. He served briefly at Rio de Janeiro, Peking, and the Holy See. On 24 April 1930 he married Edda, the daughter of Mussolini. Thereafter his promotions were very rapid indeed. After a brief period serving as Consul General at Shanghai, Ciano was named Minister to China, and in 1932 served as presiding officer of the League of Nations’ Commission of Inquiry on the Sino-Japanese conflict. In August 1933, Mussolini named his son-in-law chief of his press office, which in September of the next year was upgraded and renamed the Office of Press and Propaganda with Ciano as its undersecretary. In June of 1935 the Office was transformed into a full-fledged ministry with Ciano at its head.

Ciano volunteered for the Ethiopian War and served in command of a bomber squadron. He was decorated by Marshal Badoglio for military valor in that war. Then on 9 June 1936, at the age of 33, he was appointed Minister of Foreign Affairs, an office which he filled until February 1943. Young Ciano was even accorded, retroactively it would seem, that great Fascist honor of having taken part in the “March on Rome” in 1922.

Ciano was skeptical of Mussolini’s war plans and knew that Italy’s armed forces were ill-prepared for a major war. When Mussolini formally declared war on France, he wrote in his diary “I am sad, very sad. The adventure begins. May God help Italy!” After 1939, Ciano became increasingly disenchanted with Nazi Germany and the course of World War II.

Ciano, having been dismissed from his post by the new government, attempted to find shelter in Germany, alongside Edda and their three children, but the Germans returned him to R.S.I. agents and he was then formally arrested for treason. Under German and Fascist pressure, Mussolini had Ciano tried. After the Verona trial sentence, a Fascist firing squad, at a shooting range in Verona on 11 January 1944, executed Ciano and others (including Emilio De Bono and Giovanni Marinelli) who had voted for Mussolini’s ousting. The executed Italians were tied to chairs and shot in the back as a further humiliation. Ciano was effectively executed for dissenting against Il Duce’s will. His last words were “Long live Italy!”

Ciano is remembered for his famous Diaries 1937–1943, a daily record of his meetings with Mussolini, Hitler, von Ribbentrop, foreign ambassadors and other political figures that proved embarrassing to the Nazi leadership and the Fascist diehards. Edda tried to barter his papers in return for his life with the help of factions in the German high command; Gestapo agents helped her confidant Emilio Pucci rescue some of them from Rome. Pucci was then a lieutenant in the Italian Air Force, but would find fame after the war as a fashion designer. When Hitler vetoed the plan, Edda hid the bulk of the papers at a clinic in Ramiola, near Medesano and on 9 January 1944, Pucci helped her escape to Switzerland with the 5 diaries covering the war years.The diary was first published in 1946 in English in New York in an incomplete version. The complete English version was published in 2002.

More information also on his diaries at: CIA Library website

Well, what you see here is the diplomatic passports of Ciano and it is in excellent condition. This document is offered by a Italian seller which is asking unfortunately for a unrealistic huge price .

The seller wrote me further: ” My grandfather was a police officer with the rank of Marshal during the fascism period. My grandfather’s name was Adalgiso Gasbarri and he worked at the Ministry of Foreign Affairs, at the passport office. So  he wrote passports, especially because he had a beautiful writing, what you see in the passport was his writing.
He made ​​a lot of passport …. “


Thanks to the attention of my German fellow collector I am able to report about these significant document. 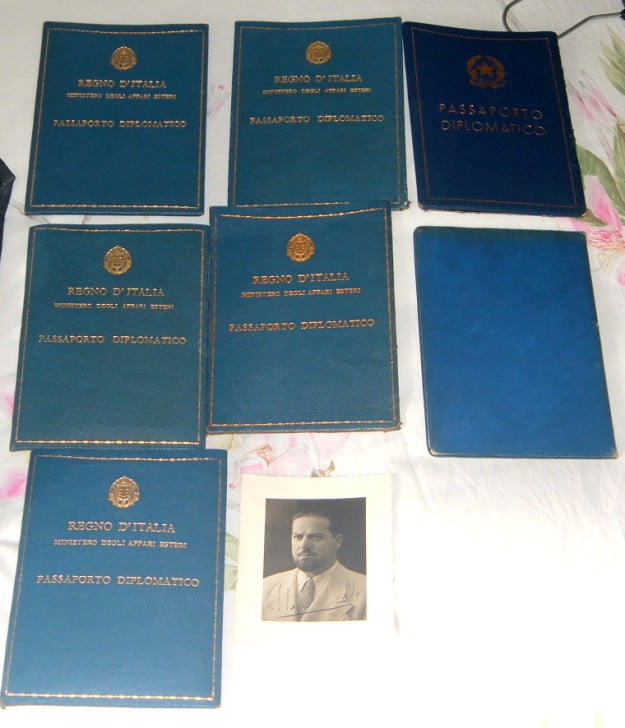 Your book is awesome! I love it! (GvK, Belgium)

Tom, actually I wanted to ask you when we can expect “Part II”? I like it very much, especially the stories behind the passports! Great job my friend and keep writing. (R.S., SG)

Your book definitely tells a lot about the history of passports and I applaud you for the effort that you put into writing the book. (Benjamin Durham, CH)

Tom, I received LET PASS OR DIE today. I’m pleased you invested in good printing, as the images are excellent. I’m looking forward to reading it and passing on purchase details to ex-colleagues from the UK Immigration National Document Fraud Unit. (S.A., UK)

I’ve got the book yesterday and it improved my knowledge about passports history immensely. (Jenwit, TH)

When I started to read the book, I understood how less I know about passports when an expert talks about them with passion. At the first glace, passports, which we see every day become even more interesting. (Pavel, BR)

I am reading the first chapters of the book and I love the theme and how it is addressed. Without a doubt it is a very interesting book. (Marcos, AG)

I am not a passport collector but I saw someone reading your book in the train during my business trip and it caught my attention. So I bought it.
(Przemek, PL)

Your book arrived and what a thing of beauty it is.
(Dave, USA)

Your book is fantastic! (Ross, USA)

The book is fantastic!  Really enjoying it. It will definitely be in our reading list for the online collection. (Karin, USA)

Your book is awesome, I can learn a lot about passport collecting! (Robert, USA)

I have begun my delighted perusing of your book. The stories of Lou Gehrig, the Confederate Brigadier General, Thomas, the bogus passport of Freud plus the Titanic survivor, Edith Brown Haussmann – all fascinating! (Susan, USA)

The story of how Israel issued me a passport with a Colander on my head has been published in a book about the history of passports, titled “Let Pass or Die”, by Tom Topol, a passport history expert. May the Flying Spaghetti Monster bless his sauces. (Michael Afanasyev, @DocSpaghetti)