German-Soviet relations have always been exceptional, and this passport is an excellent example of these relations. Hermann Saam was a consular secretary and diplomatic courier at the German embassy in Moscow. Such Third Reich documents of duty in the USSR are scarce to find! Hermann’s Ministerialpass was issued on 11th Nov 1939, about twelve weeks after signing the Molotov-Ribbentrop pact and nearly a month after WWII began.

The Ministerialpass has document number 2135 and was valid till 10th Nov 1944. However, the last entry in his diplomatic travel document was from 23rd July 1941. More on this interesting handwritten entry, later. Saam was in 1939 when he was on diplomatic courier duty, 29 years young.

The visas in his travel document include Lithuania, Latvia, several USSR, and several German visas (issued at the German embassy in Moscow!) Nothing I saw so far was so closely related to “Operation Barbarossa” than this diplomatic travel document.

Coming back to the last entry which reads

“I confirm herewith that Mr. Herrmann Saam is traveling from 23rd July 1941 by a special transport back to the Reich, to work as a Russian interpreter”.

Stamp from the German embassy in Moscow, a signature (I can’t read – from an embassy official) and from Werner von Trippelskirch, the second-highest German official who led the embassy when ambassador Friedrich-Werner Graf von der Schulenburg wasn’t present.

After the German attack on the Soviet Union in the summer of 1941 Tippelskirch returned to Germany (departure from Moscow on June 24, 1941). From July 24, 1941, he was employed in the “Political Department” at the German Foreign Office, where he worked as a counselor with the title of an ambassador to Russia, the Baltic States, and Poland. He remained in this post until 1945. Tippelskirch was taken prisoner of war in America. Subsequently, he was a witness at the Nuremberg trials. Tippelskirch’s cousin was the head of the General Staff of the Army, Kurt von Tippelskirch.

It seems Saam was in briefly in a Soviet internment camp as the document lot also includes two editions of the camp newspaper “KZ am Mittag,” Kostromaer Zeitung der Deutschen Internierten in der Sowjetunion. Kostroma and der Wolga den 1. Juli 1941 (in German). These two issues of the camp magazine are most interesting as they report the first-hand experience of inmates. The first issue was distributed quickly after just ONE WEEK in the camp: issue number two, FOUR WEEKS after internment. A statement reads

“22nd June 1941 – Farewell from Moscow – Our chronicle adventures, part one:
A ciphered telegram received by the German embassy at 3 am at night and is asking to send somebody from the embassy to foreign minister Molotov, to communicate that the hostility has begun. Embassy documents started to get destroyed. The Bulgarian ambassador is taking care of German interests. The German embassy doesn’t exist anymore. We are cut off from our homeland…”

All events are described in detail happening on 22/23 June 1941 at the German embassy.

They are further describing life at the camp. Issue no.2 of the camp magazine describes events from June 25 to July 24. It seems key German staff of the embassy in Moscow was imprisoned only briefly for a few weeks as they describe their arrival on July 24 in Berlin, Germany. WOW, great first-hand stories! 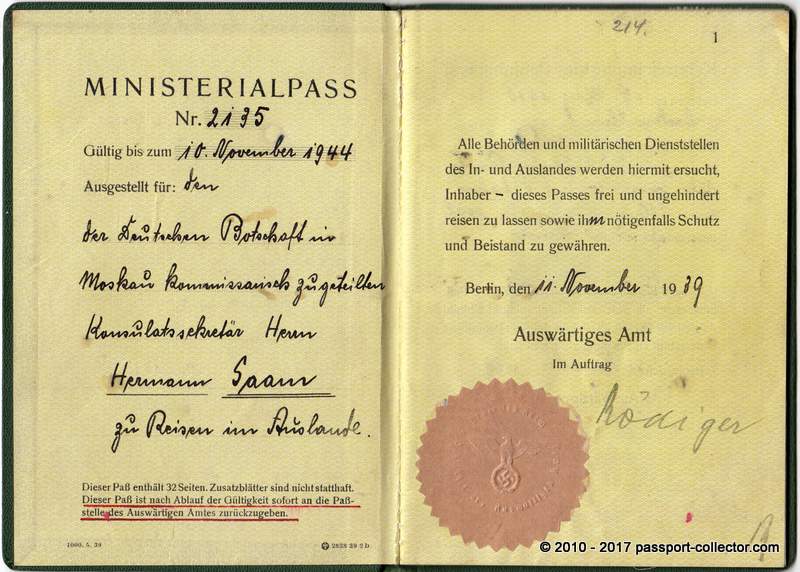 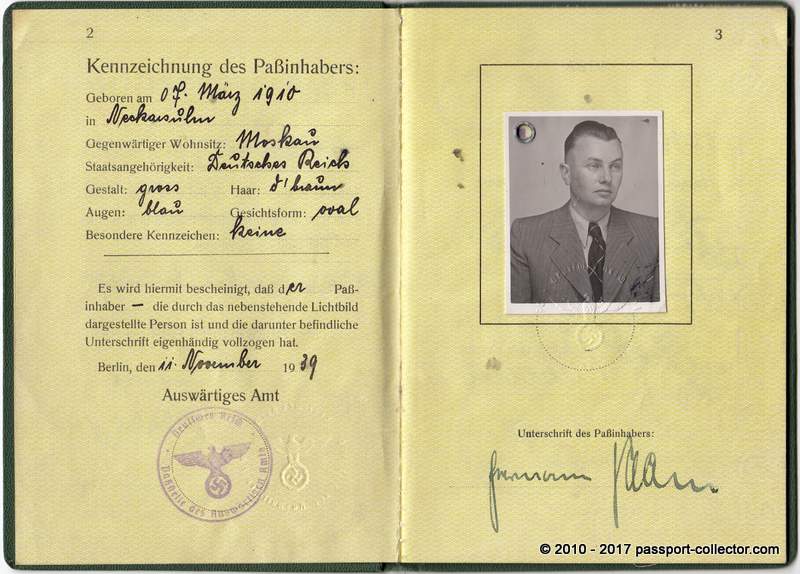 Very Interesting Austrian Post World War II Passport Thanks to my fellow collector from Germany who offered this quite unusual document, I can display it’s pictures and tell a bit about the document. Direct after WWII Swastika free documents did…

last passport East Germany Almost thirty years after the wall came down on 9 November 1989 and twenty-nine years after the German reunification on 3 October 1990, this passport is now on my desk – and it could be the…