Can you imagine that after 100 years, such an important document came back on the surface? I am speechless! The travel document is a Ministerialpass (diplomatic passport) issued for a member of the German Treaty Commission (entourage) for Versailles. And I still can’t believe that this document is now on my desk just in front of me.

The Treaty of Versailles placed a heavy burden on Germany’s burgeoning democracy. It forced the country to pay billions in reparations; give up its colonies in Africa, Asia, and the Pacific region; and cede 13% of its territory to other nations. Among other things, Alsace-Lorraine became French, and most of West Prussia became Polish. The victorious powers — led by the United States, Britain, France, and Italy — declared Germany and its allies solely responsible for the outbreak of World War I. They accused the Germans of having forced them into war, thus holding them accountable for “all losses and damages” incurred. Diplomatic Passport Treaty Versailles 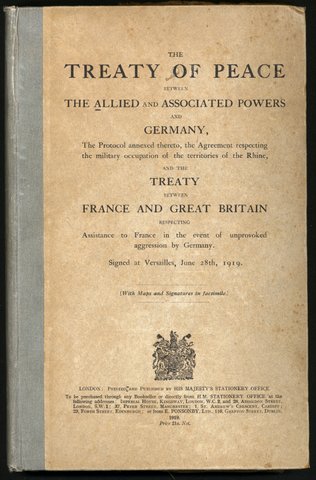 The Treaty of Versailles was signed on June 28, 1919 — but not by Chancellor Philipp Scheidemann, who resigned rather than lend his signature to the accord. Germany only signed the treaty after the Allies threatened to invade the country. The Rhineland, incidentally, had remained occupied since the armistice of November 11, 1918.

In Germany at the time, many dismissed the treaty as a “dictated peace” due to its harsh terms. Eckart Conze, a historian at Marburg University, believes this outrage was “undoubtedly” justified. After all, the Germans never had any say in the negotiations.

Over 65 million people had fought in World War I, and more than 8.5 million military members and at least 6.6 million civilians died. The war decimated farmland, towns, and battlefields around Europe. And according to many, Germany was to blame. Though contemporary historians are still split on who should be held responsible for World War I, the treaty blamed and punished Germany.

European leaders signed the treaty in the Palace of Versailles’ Hall of Mirrors—the very place where the German Empire had been created, and Wilhelm II’s father made emperor in 1871. It was a slap in the face to Germany, whose residents saw the famous “war guilt” clause as a humiliation. (The United States did not ratify the treaty due to political division between Democrats and Republicans.)

Though there was a real desire for peace in the wake of the disastrous war, the agreement did not achieve its intended effects. Furious at what they saw as a harsh “diktat” (a dictated peace), right-wing German politicians used the treaty as a nationalist rallying point. The staggering reparations payments reduced the country’s industrial output, and other forces thrust Germany into hyperinflation in the 1920s, which played into the economic instability of the Great Depression.

European leaders were dissatisfied with the redrawn map of Europe and the concessions they each had made in the name of uneasy peace, with some disappointed that Germany hadn’t been treated even more harshly.

A green blank cardboard cover without Coat of Arms. The Ministerialpass (diplomatic passport) is a double folio fold-out paper issued by the German Foreign Office, Department of the Peace Treaty Negotiation, Passport Office, which classifies this passport, for me, as the most important document of German (passport) history. I do have other highly relevant documents in my collection. Still, I don’t exaggerate when I say that this diplomatic passport is now the most significant document I could acquire in 16+ years of collecting.

The passport number is V.16 and I assume V. stands for Versailles, which means at least 16 such passports for the treaty commission have been issued until May 9, 1919. I am delighted to have such a memorable document of German history in my collection.