German Empire Passport Issued At Their Consulate In Moscow

German ambassador these days was Hugo Julius Raoul Eduard Leszczyc Fürst von Radolin, who had his residence in St.Petersburg. Since 1901 he was ambassador in Paris and before his post in St.Petersburg he was ambassador in Constantinople.His diplomatic achievements were rather limited. He had to be withdrawn from Russia because he had a dispute with the Czarina. In Paris, he tried in vain for a Franco-German approach. He came from the old Polish nobility of Radolin. His father was the Prussian chamberlain and member of the manor house Emmerich Ladislaus Leszczyc Count of Radolin-Radolinski (1808-1879), lord on Jarotschin and Radolin. He married 1863 in London Lucy Katharina (1841-1880) a daughter of lieutenant colonel Alfred Howard Wakefield. After the death of his first wife, Radolin married Johanna (1864-1947) in 1892. This was the daughter of Hans Count von Oppersdorff and his wife Elisabeth (born de Talleyrand-Perigord).

The Passport was issued to Christian Winkel (architect), which was the father of Irene von Richthofen, nee Winkel. Irene’s husband Heinrich von Richthofen was a Professor at the art academy in Düsseldorf. Irene herself a notable painter

Richthofen is the surname of a prominent German aristocratic family. The most famous member is the air ace Manfred von Richthofen (1892–1918), also known as the “Red Baron”, but a number of other members of his family are also notable for various reasons. Some members of the family have a royal ancestry as descendants of the older of two illegitimate sons of Leopold I, Prince of Anhalt-Dessau, by Sophie Eleonore Sölden. 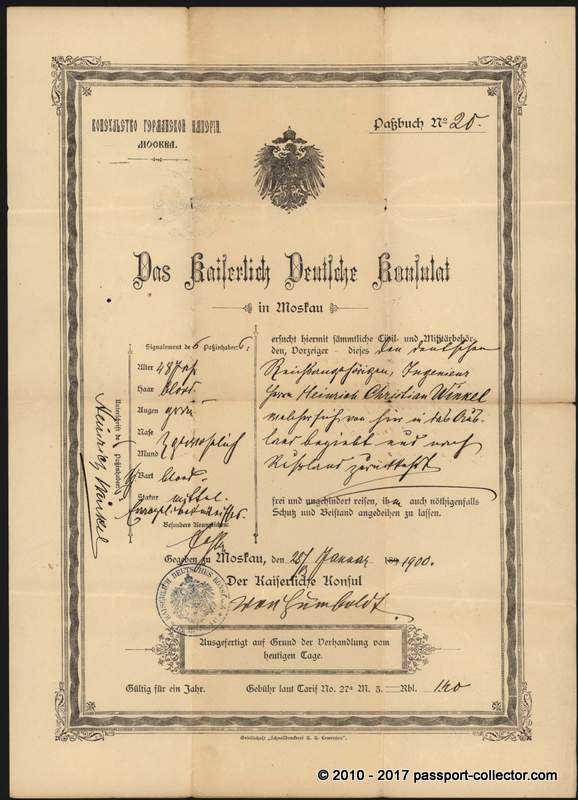 German Empire Passport Issued At Their Consulate In Moscow