The following travel document is passport history at its finest. I have to admit I didn’t know this part of German/Polish history, but sometimes you see something, you dig deeper and then suddenly I was enlightened. The passport was issued by the Kingdom of Poland, a proposed puppet state of the German Empire during World War I.¹

This document is most likely one of its kind, a passport of a state which existed only for an eye blink on the timeline of history!

On November 5th, 1916 the German Emperor William II and the Emperor Franz Joseph I of Austria issued the ‘Act of 5 November’ creating the Kingdom of Poland as an independent State with a hereditary monarchy. However, it did not have a government, and its borders were not yet defined. A state bank was established in Dec. 1916, which issued coins and paper money. Charles Stephen was considered as a candidate to be regent and eventually king.

At the time Charles Stephen was living at the Castle of Saysbusch (Żywiec), in Galicia. His chances were enhanced by the fact that he spoke fluent Polish. Two of his daughters were married to Polish princes belonging to the noble houses of Radziwill and Czartoryski. However, as Charles Stephen was a member of the Imperial House of Austria he needed permission to become king from the head of the family, Emperor Charles I, who hesitated, having himself planned to assume the Polish crown.

Moreover, the Radziwill and Czartoryski families urged the cause of Russia (as their ancestors had in the 18th century). Adding to the political muddle was the support of Ukrainian nationalism by Charles Stephen’s son, Archduke Wilhelm. In the end, the proclamation was so vague and tentative that it failed to inspire enthusiasm among its supposed beneficiaries or even among the Germans and Austro-Hungarians themselves.

On January 17th, 1917 a provisional state council was established, with J. Pilsudski as a member. Pilsudski, had stopped to collaborate with the interim state council and with the Germans and had been arrested.

The decision to propose the restoration of Poland after a century of partitions was taken up by the Germans in an attempt to legitimize further imperial omnipresence in the occupied territories. The plan was followed by the German propaganda delivered to the Poles in 1915, claiming that the German soldiers were arriving as liberators to free Poland from subjugation by Russia. A draft constitution was proposed in 1917. The German government used punitive threats to force Polish landowners living in the German-occupied Baltic states to relocate and sell their Baltic property to the Germans in exchange for the entry to Poland. Parallel efforts were made to remove Poles from Polish territories of the Prussian Partition.

In October 1917, a regular government was installed in the Kingdom of Poland, the Polish state becoming a reality. With the Russian Revolution going on, the 3 Polish corps in the Russian Army refused to place themselves under Bolshevik command and, in early 1918, protected the Minsk region from Bolshevik incursions. Soon the area was occupied by German forces, and the Polish Corps was dissolved. With Germany surrendering on November 11,1918 – the GERMAN REVOLUTION had broken out on Nov. 8th, the republic been proclaimed on Nov. 9th, a POLISH REPUBLIC took shape within days, comprising of Russian Poland and Western Galicia.

A booklet with black linen softcover, without COA. A total of eight pages, 10,5 cm x 16,5 cm. The passport was issued by the central committee of the Kingdom of Poland on 15 June 1918 in Petrograd to Geologist Leon Werner, who is shown on the passport photo in uniform and with eyeglasses. The passport has the number 217. On page seven is a stamp from Warsaw, dated 13 Dec 1918. Leon Werner was born in 1869, which made him 49 years old when the passport was issued. He lived in Warsaw and was catholic. The document is in Polish and Russian language. 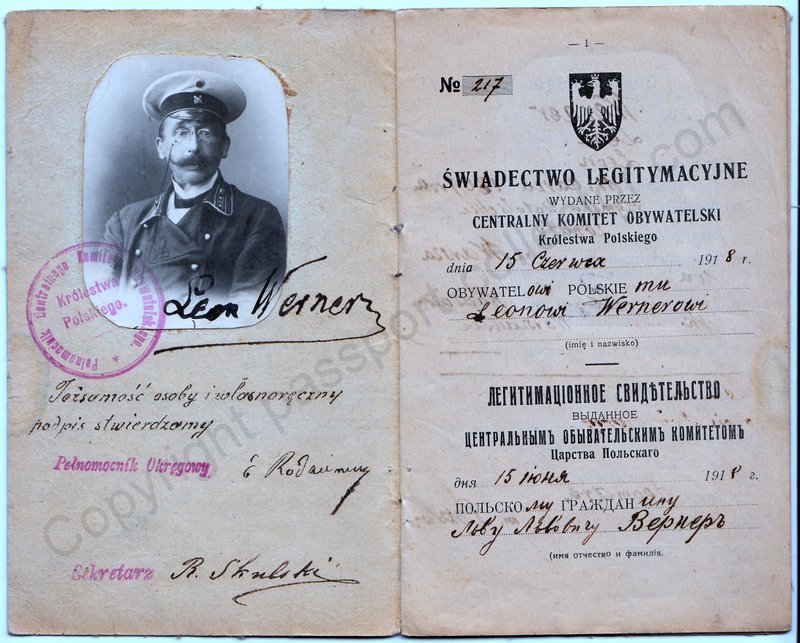 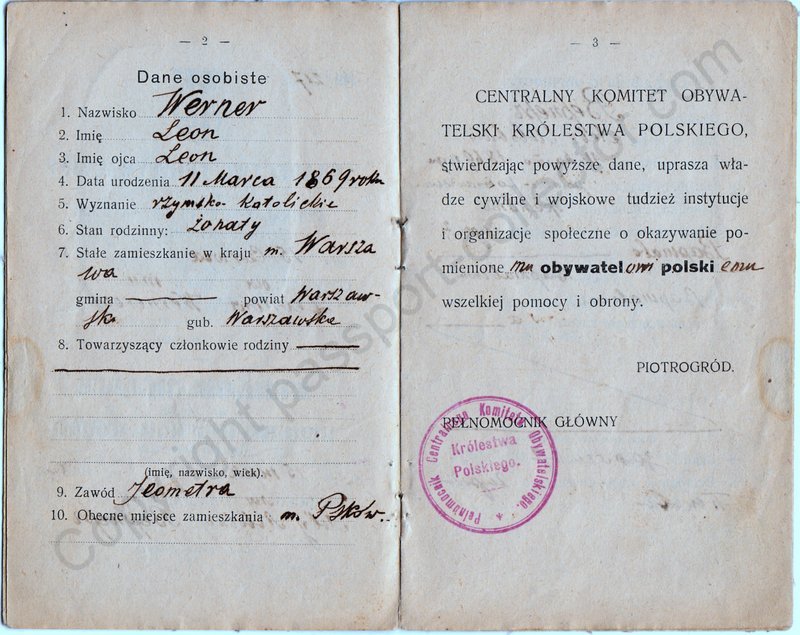 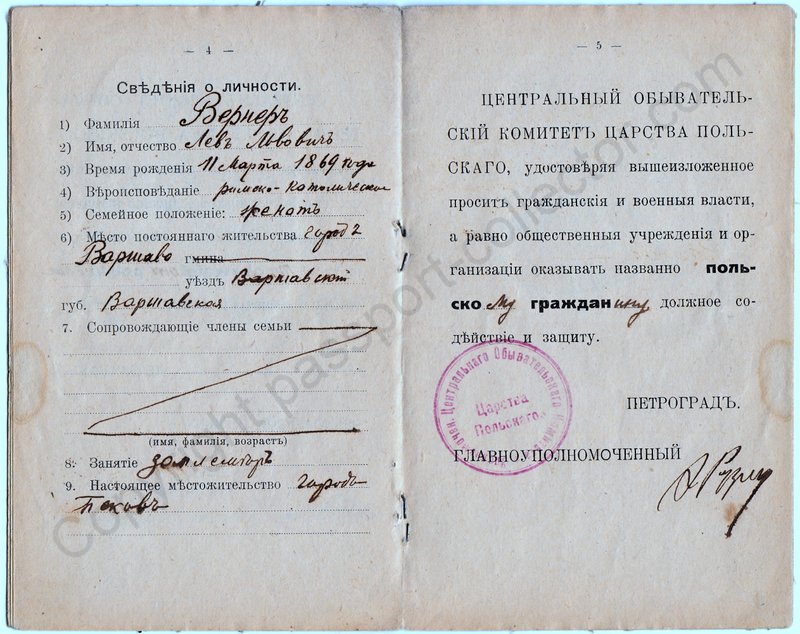 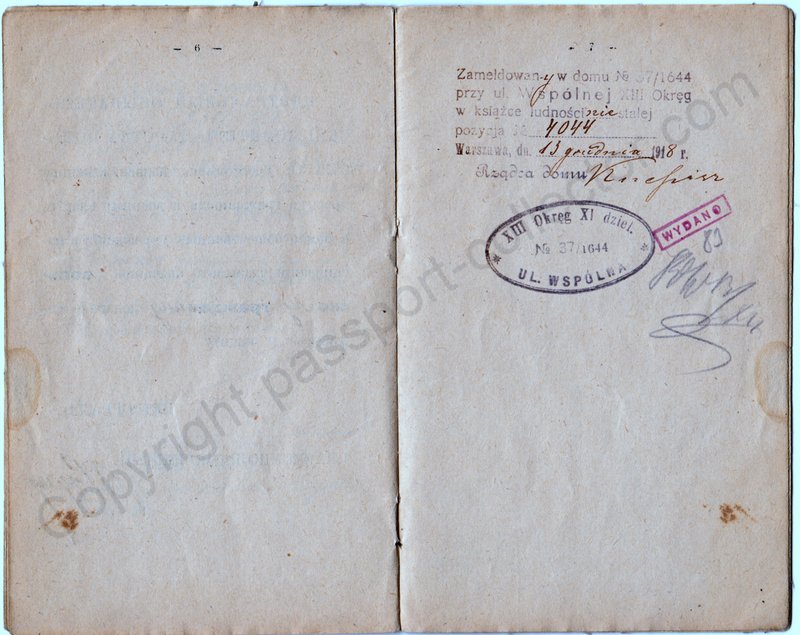 Leon W. was a citizen of Poland and worked on the territory of Imperial Russia, in the photograph we see him in the uniform of a Russian official, as an officer in the Union of Polish Military in Russia 1917-1918. In 1926 he was awarded for being a member of this organization.

I have never seen this passport-type before as it is a pretty rare one. Only the “WARSZAWA1939.PL” FOUNDATION has such a document online. Digging into history to learn more about passports is another fascinating aspect when collecting such documents. What a great find! 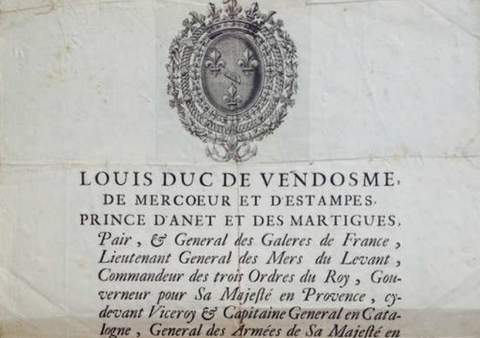