Dr. Gisela Pelzl passed away at the age of 80 years

On Friday, March 06, 2020, Gisela Pelzl (born von Mülmann) passed away at the age of 80 after a long illness. Gisela Pelzl earned her spurs as a competitive athlete in basketball, among other things, as part of the women’s national team in the 1960s. She was thus a player at a time when basketball had to develop as a marginal sport in the GDR with increasingly less state support. Even after her rather early retirement from active competitive sports, she remained faithful to the orange leather. In addition to her work as a player in the premier league, her activities from the 1970s onward focused on her work as a sports physician. She provided medical care for entire generations of competitive athletes, often starting in childhood and adolescence. GDR Sports Physician Passport

Actor in a dynamic time

Gisela Pelzl was active in a dynamic time. She was active as a competitive athlete from 1955 to 1968. In the GDR, there was a strong promotion of sports. However, the sport of basketball did not always have an easy time. Basketball did not receive the same attention and support as other team and individual sports. On the one hand, the sport of basketball did not have a particularly strong tradition on German soil. On the other hand, the political leadership had a hard time with the sport with the English name, which was at home with the “class enemy”. The political resentment and financial costs were too great. Thus it was a matter of proving oneself with appropriate successes. Successful female athletes such as Gisela Pelzl contributed significantly to the further establishment of our sport. Despite the withdrawal of basketball as a sponsored sport in 1969. GDR Sports Physician Passport

Gisela Pelzl wrote the team chronicle of the ladies for many years and, like many teams and management players in the post-war years, attached great importance to the creation of meeting and exchange spaces. Getting to know the country and its people, especially during trips abroad, was already important at that time.

Basketball from a different perspective

After her retirement from the women’s national team, “Müli”, as Gisela Pelzl was called by her circle of friends, was active from 1969 as a senior league player with the “HSG PH Halle”. In 1976, together with her team, she once again managed to place on the podium at the GDR Championships (bronze). In the 1980s she kept fit in the district league. GDR Sports Physician Passport

Dr. med. Gisela Pelzl worked for a long time as a physician in the sports medicine service in Halle. After 1969, she was responsible for gymnastics, among other things. However, due to her attachment to basketball, she also cared for numerous basketball players for decades in her full-time and partly also voluntary work as a doctor. This commitment “in another sport” was just tolerated by the management. Whoever played competitive basketball in the 70s and 80s could therefore not get past Dr. med. Gisela Pelzl. GDR Sports Physician Passport

Marion Streit, also a former national player in the younger generation, remembers: “Once a year we went for a sports medical examination. Gisela Pelzl and her staff were responsible for this. She was always very committed and friendly. When problems arose, she always took time for us sportswomen. As a player, she had “bite” and was also ambitious.”

Gisela Pelzl remained active as a sports physician after 1990. She worked at the Olympic Training Center in Halle until the 2000s. There she continued to care for competitive athletes. Those who took the entrance exam to the sports school made her acquaintance during the entrance test. I myself remember my sports medical examination in 2001. An older lady with short, gray hair smiled at me in a friendly manner. I felt very comfortable then, despite the unfamiliar surroundings with the various medical apparatus. GDR Sports Physician Passport

From the 1990s, “Müli” was increasingly active in senior women’s basketball – success was not long in coming! First playing in the USV Halle in the Oberliga, later in the Stadtliga, numerous participations in the Federal German Senior Women’s Championships followed. In the AK III, even 1st place was reached. After the introduction of AK IV (Ü48), Gisela Pelzl and her team won gold four times and silver again in 2005 at the Federal German Championships. She was also internationally active on the dance floor. As a participant in the FIMBA Championships, Gisela Pelzl represented the FRG in Helsinki in 1999 and in Ljubljana in 2001. In 1997 she also took part in the World Championships in the USA.

Her GDR passport was issued in 1988 and valid until 1998. There is a visa for France in 1988 and a US visa from June 1990 issued at the US Embassy in East Berlin. Latter visa is pretty rare as in 1990, after the fall of the wall surely not many US visas were issued. Her visa number is 7279, which means until June 1990 the US Embassy issued this amount of visas. GDR Sports Physician Passport 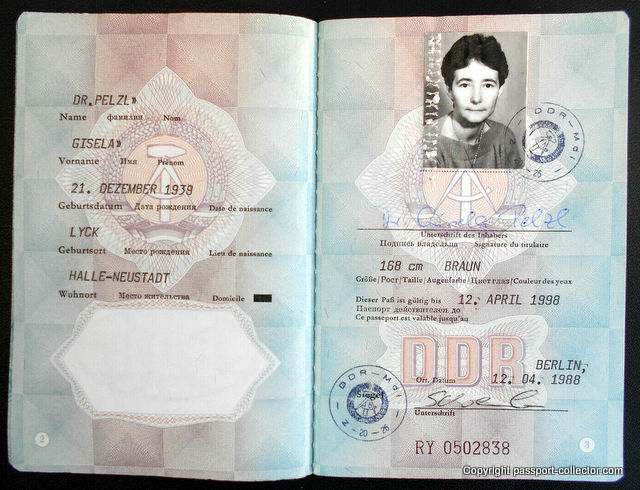 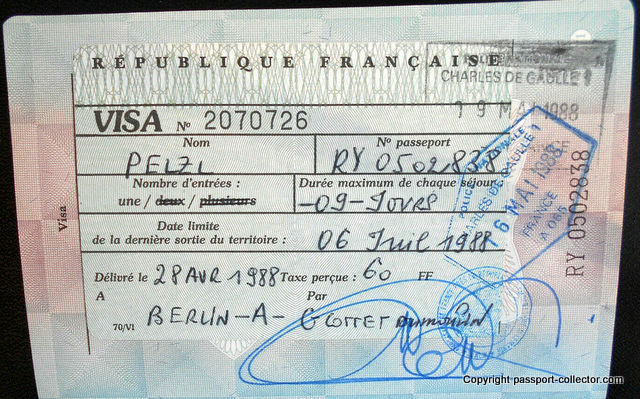 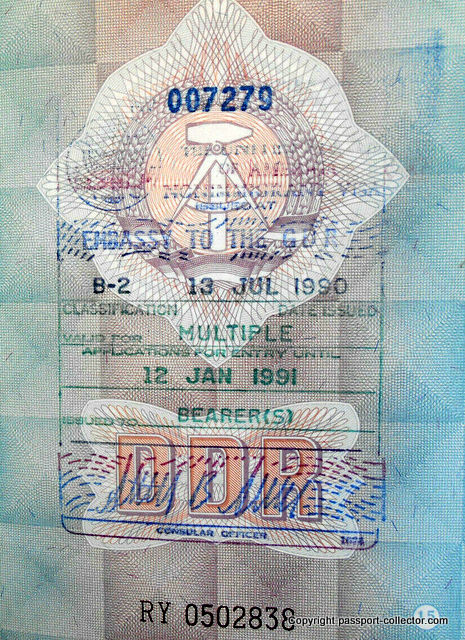 The original German text, which you can find at https://bvsa.de/der-bvsa-trauert-um-dr.-gisela-pelzl was translated by the author into English. 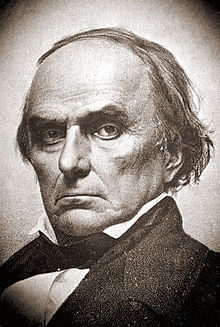