The following document, which seems to be a passport, was auctioned years ago for GBP 5,000. What a fantastic document of British (passport) history! James V Scots passport

Eighteen lines are written in a secretary hand, one page, 205 x 266 mm, endorsed on verso (small tear in blank margin, two punctures, one is touching the ‘R’ of ‘Rex’ at the head, a few tiny splits in folds, traces of mount on verso). 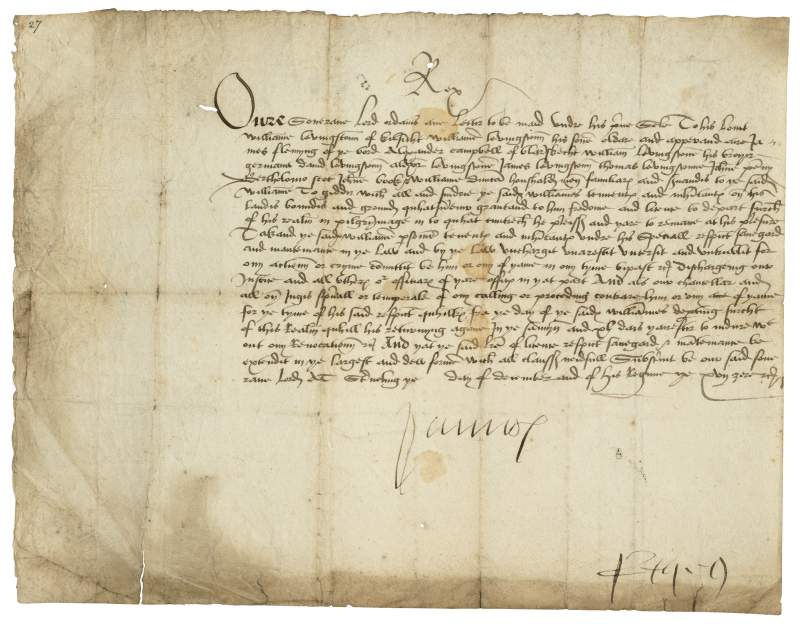 A license for a nobleman to go on a pilgrimage: James gives William Livingstone of Kilsyth permission ‘to depart furth of his realm in pilgrymage unto quhat cuntreth he pleasis and there to remaine at his pleasure’, together with his family and household. James V Scots passport

James had inherited the throne as a baby after his father’s death at the Battle of Flodden (at which the recipient’s father had also perished). Still, his rule began only in 1528 when he escaped from the virtual captivity of his stepfather, the Earl of Angus. He spent much of 1529 presiding at justice ayres in the Lowlands and Borders.

During the period of his minority, which lasted throughout the first half of his reign, James was a pawn in the struggle between pro-French and pro-English factions; after he assumed personal control of the government, he upheld Roman Catholicism against the Protestant nobles and allied his country with France.

James was 17 months old when he succeeded to the throne of his father, James IV (ruled 1488–1513). In the power struggle that developed between the pro-French regent, John Stewart, Duke of Albany, and the head of the English party, Archibald Douglas, earl of Angus, each side sought to gain possession of the young ruler. James’s mother, Margaret Tudor, complicated events by shifting her allegiance from her husband, Angus, to Albany. James V Scots passport

Albany retired to France in 1524, and Angus kept James in confinement from 1526 until 1528 when the king escaped and forced Angus to flee to England. By 1530 James had consolidated his power in Scotland. He signed a treaty with his uncle, King Henry VIII of England, in 1534, but in 1538 he married the French noblewoman Mary of Lorraine and, after that, allied with France against England. A cruel man, he instituted in his later years a near reign of terror in Scotland, and his financial exactions did not endear him to his subjects. James V Scots passport

When Henry VIII’s forces attacked Scotland in 1542, James’s small army, weakened by the disaffection of the Protestant nobles, crossed into England and was easily routed near the border at Solway Moss in November 24, 1542. The disaster caused the king to suffer a mental breakdown; he died on December 14, 1542, a week after the birth of his daughter—his only surviving legitimate child—Mary Stuart (Mary, Queen of Scots). Among his several illegitimate children was James, earl of Moray (died 1570), who became regent of Scotland when Mary Stuart abdicated her throne in 1567.

William succeeded his father after the Battle of Flodden (September 9, 1513).  Miss Van Rensselaer wrote: “William was the eldest son and heir to the lands of Castletown and Balmallock on March 15, 1513/14 and son and heir of the late William Livingston of Kilsyth who had died under the King’s banner in the battle in Northumberland” (Florence Van Rensselaer: “The Livingston Family in America and Its Scottish Origins”, New York, 1949 page 46) James V Scots passport

William married Janet Bruce of Airth, a daughter of Sir John Bruce of Airth.  For Janet’s ancestry, including a probable connection with the Bruce Kings of Scotland, please click on Bruce of Airth. Janet and William had a son: Alexander Livingston of Over & Nether Inches