A transit visa from Kovno to Curacao via Japan, issued by the Righteous Among the Nations Sempo Sugihara just before the annihilation of Lithuanian Jewry, to save the life of  Nachman Yitzchak Sroka, who escaped from Warsaw to Lithuania at the outbreak of the war. A rare historical item. Kovno, Lithuania, August 1940. Double paper leaf. 23×29 cm, written on both sides. Certificate of Polish citizenship of Nachman Icchok Sroka which was issued by the British Consulate and the British Office for Polish Interests in Kovno, Lithuania. A photograph of Sroka with Polish and British stamps and personal details filled out by hand. On the second page, a transit visa to Curacao via Japan from the date 8.8.40, written and stamped in English and Japanese, by the Japanese Consul Sempo Sugihara.

A rare and important historical document, testimony to the noble deeds of the diplomat Sempo Sugihara who did all that he could to save Jews in the crucial moments of the summer of 1940 in Lithuania.  The actions of Sugihara, who acted against orders, were later recognized throughout the world as an act of tremendous bravery and humaneness and he was awarded a medal as one of the Righteous Among the Nations. 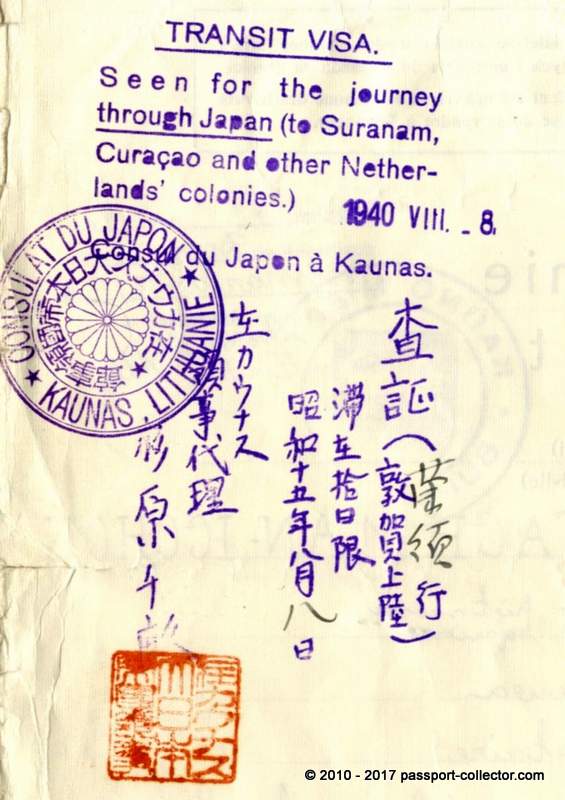 With the German invasion of Poland at the outbreak of World War II, many Polish Jews escaped to the Baltic countries. In the summer of 1940, when Russia forcibly annexed Lithuania, the refugees tried to escape from Europe by every possible means. The world’s gates were locked, and it was impossible to pass through the Soviet Union without a valid visa for the final destination.After Jan Zwartendjik, the temporary Dutch Consul in Lithuania, agreed to issue visas to the Dutch Curacao Island the Russians agreed that the refugees could pass through the Soviet Union on their way to Curacao, on the condition that they receive transit visas. Therefore, Dr. Zerach Warhaftig, one of the leaders of the Mizrachi movement, approached the Japanese Consul, Sempo Sugihara, and asked him to issue the visas.Chiune “Sempo” Sugihara (1900-1986) served as the Deputy Consul of the Japanese Empire in Lithuania in Kovno, and served as the acting Consul in the critical window of opportunity of the summer of 1940. Despite his government’s refusal of the offer, Sugihara decided to act and to issue the permits to the many Jewish refugees who flooded to the Consulate’s doors. In the remaining weeks before he left Kovno, he worked tirelessly, for over 18 hours a day, to issue these visas, knowing that they would save the lives of their bearers. Many yeshiva students, such as the students of the Mir Yeshiva who had also escaped to Lithuania, took advantage of this opportunity to flee. During August 1940, when the Russians took control of Lithuania, Sugihara and Zwartendjik were forced to stop their activities. Even as he boarded the train, Sugihara continued stamping passports, knowing that each of them was a lifesaver for its recipient. 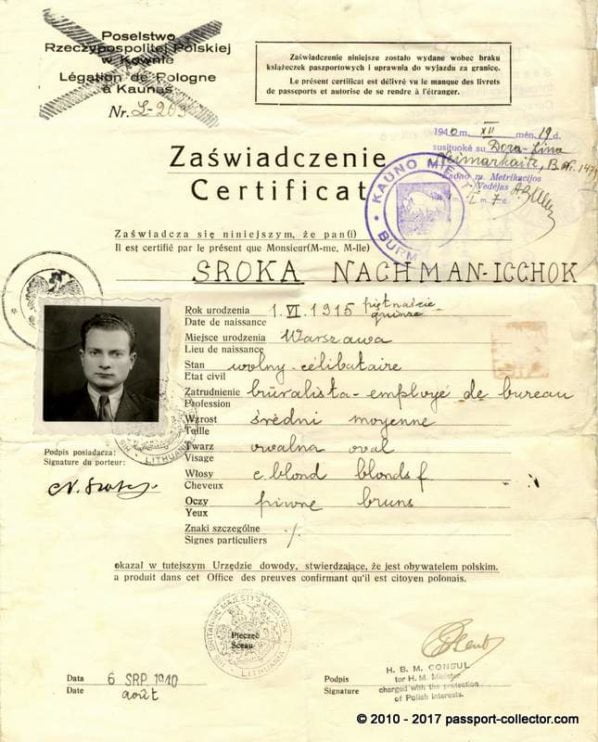 There is a list of 2,139 names in the official Sugihara database, and Nachman Sroka’s name appears in row 1,500. His name is displayed in “The Flight and Rescue” exhibition in the United States Holocaust Memorial Museum in Washington.