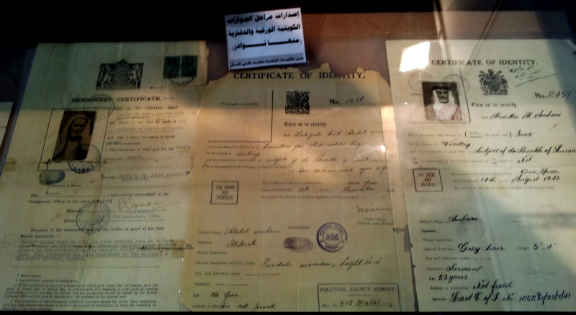 KUWAIT: Traveling in the 1930s was not as a familiar process as it is nowadays since Kuwaiti people, back in the days, had no passports to travel with. They traveled to few countries and were restricted to an agreement between the government of Kuwait and the British Empire, researcher in the Kuwaiti heritage Dr Yagoub Al-Ghunaim said yesterday. People who wanted to travel had to go the Amir’s Secretary Scholar Saleh bin Mohammad Al-Mulla. As a secretary of the Amir Sheikh Ahmad Al-Jaber Al-Sabah, the 10th ruler of Kuwait, he was assigned for the duties of issuing travel documents. These documents were handwritten and unprinted, however; these simple forms served the purpose of identifying the traveler by name and the destination he/she wanted to travel to, Al-Ghunaim noted.

He further explained that whoever wanted to travel had to stop by Scholar Saleh’s office who, on this part, had to write a letter to the resident British political agent in Kuwait. The letter mentioned the traveler’s name, his/her nationality. The letter, then, was given to the British house of accreditation. After paying one Rupee (75 fils) a traveling certificate was issued. This procedure was necessary because Kuwaiti people back then did not have any official identification cards or other official documents.

The travel documents were 30 centimeters long. They contained photo and personal information of the carrier of the document. At the top of the paper, there was the royal crest of the British Empire. On his part, Talal Saad Al-Rumaidi, another researcher in the Kuwaiti heritage, said that these travel documents continued to be issued from the British Council in 1945 since the British were responsible for the Kuwaitis back then.

He clarified that Kuwait was under the British protection after an agreement signed between Britain and former ruler of Kuwait Sheikh Mubarak Al-Sabah in 1899. This protection shifted Kuwait’s foreign affairs to the British, therefore; the latters had the duty to protect the Kuwaitis during their travels. The protection agreement was canceled after Kuwait gained its independence in 1961. After 1961, Al-Rumaidi noted, everything has changed and ministries emerged to take over more specific responsibilities, hence, the emergence of the ministry of interior that has been assigned the issuance of passports as they are known by everyone nowadays. – KUNA

Do you remember where you have been when the wall was falling? Instantly I wanted to travel to Berlin from my city in South Germany to join this historical event of my generation – but I couldn’t. I took me…