A fantastic and unique document lot which consists on three (3) Nazi Service passports (Dienstpass) & Soldbuch of him, his daughter and wife  and letters from Captain Hans Loewe to/from his family when he was at the Civilian Internment Camp 1 (British Internment Camp Gardeland) near the German city of Neumünster. The camp was on the terrain of the company Lederfabrik Emil Köster. Interestingly, two of the cards bear his admonition to his family not to contact other relatives as otherwise his plans for the future may not succeed.

Interned were all people, where it was assumed that they were important functionaries of the NSDAP. In the autumn of 1945 there were 11,000 people interned (including several hundred women), was among them, “a comparatively high proportion of suspected war criminals”. The camp was closed in the fall of 1946, the remaining 6,000 inmates were transferred to the detention center Eselsheide at Paderborn.

OFFICIAL DOCUMENT GROUPING OF CAPT. HANS LOEWE
Intriguing grouping of 13 items related to the foreign service of Capt. Hans Loewe, A German government official and interpreter who may well have been an agent of WILHELM CANARIS ABWEHR as well. Included is his “Soldbuch zugleich Personalausweis” which lists his rank as captain, profession as “Senior Civil Servant”, and indicates that he was awarded the Iron Cross, 2nd Class in the previous war. He does not appear to have served with any military unit during the war, but did attend interpreter school in Berlin in 1943. His passport, or “Dienstpass” was issued on Apr. 6, 1943 is shows his occupation as a government official and is full of visas and foreign port of entry stamps including Hungary (special visa), Germany, Bulgaria, Slovakia, Rumania, and Turkey. Plus two GERMAN BORDER POLICE STAMPS – AIRPORT VIENNA!

Further interesting is that Hans Loewe’s passport was twice extended. One time at the German embassy in Ankara, Turkey and again in Istanbul by the SWISS CONSULATE! The same SWISS extensions can be found in the wife’s and daughter’s passport!

(In quest of the Allied relations towards the end of World War II, in 1944, German-Turkish diplomatic relations were ended. Switzerland took then over the role as protecting power representation.)

The extension of the documents by a protecting power representation makes this passports even more special & unique. 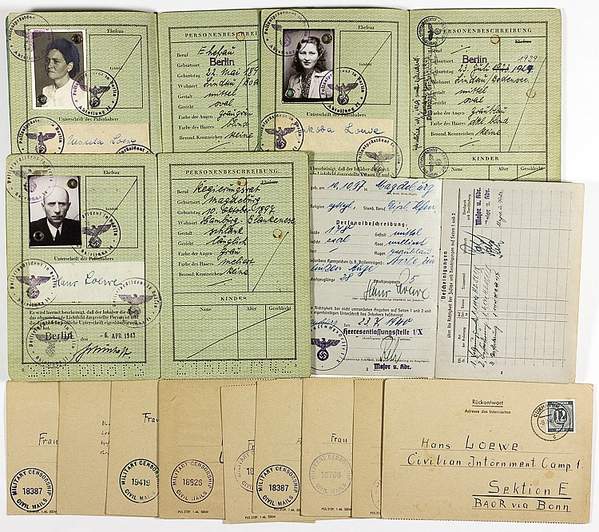 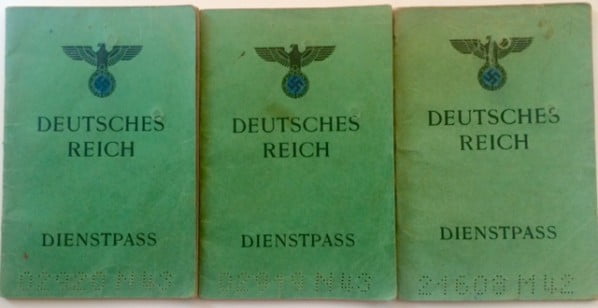