A few months ago, I stumbled over a brief newspaper article on a new mobile document checking device. I gathered more information at the manufacturer’s website and then contacted the company asking for more details. Today this device is on the brink to serial production. And a few days ago I got a 3D-printed test device (pre-production) named DOCULUS LUMUS. The name comes from Doc = Document, Oculus = Eye & Lumus = Light. 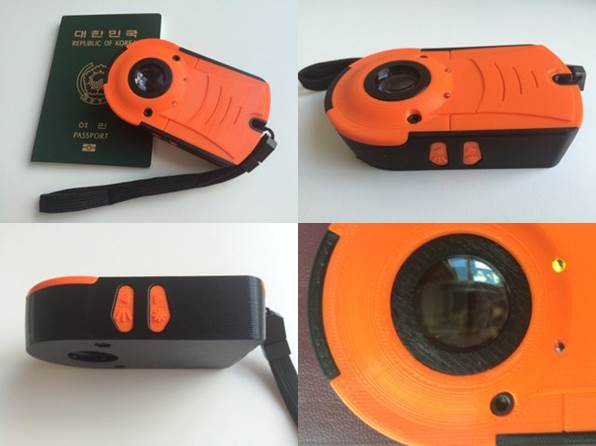 My first impression when I unpacked the device was, it really comes handy, and with a weight of only 100g, it will comfortably fit in your pocket. Dimensions are L: 10cm W: 6cm H: 3cm. Two AAA batteries are needed to operate. DOCULUS LUMUS was invented to test passports, ID cards, and banknotes. A core focus in the development was to consider the need and wishes of experts who will use such a mobile device on the spot like police, border control, or bank staff. But also for me as a collector and expert of old passports, such a device might be beneficial to detect imperfections, alternations, and forgeries.

The device has the following specifications:

When and where to use Doculus Lumus
You are the expert! Doculus Lumus helps you to check travel documents, driving licenses, banknotes, signatures and similar for authenticity, whether you are on a train, a car, a plane or even in the countryside. Different light modes reveal the security features very well. With the RFID transponder check, you can verify all currently used passport transponders for the correct response.

Test Conditions
I tested the device with the following functions on historical and modern obsolete passports from my collection and asked friends for a test with their current biometric passports to perform also the RFID Transponder Check. The later analysis was made on the following nine passport models: Italy 2012, China 2012, Germany 2011, Korea 2010, Macao 2010, Hungary 2009, Thailand 2009, USA 2008, and France 2006. The banknote is a 1000 THB Thai note. All photos made with an iPhone 5s.

15x Magnification with high-quality glass lenses
British Palestine Passport 1937. The digital zoom of any camera does allow you an even bigger magnification. 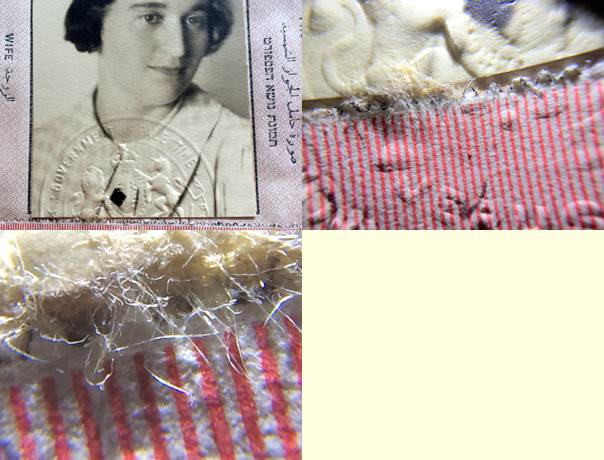 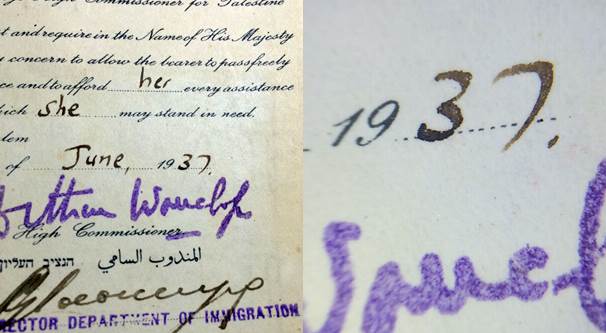 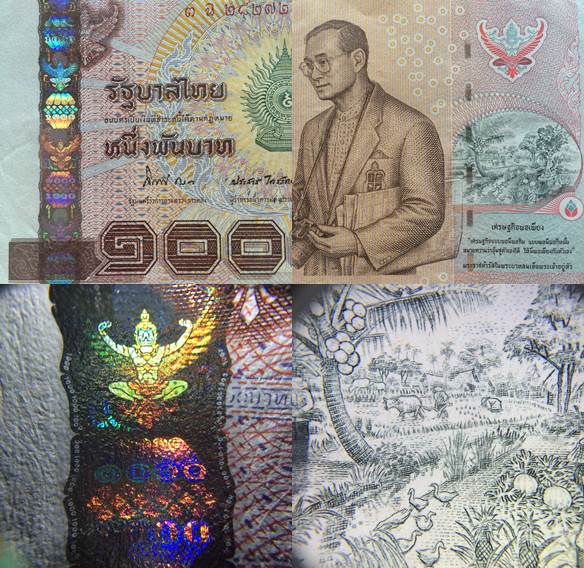 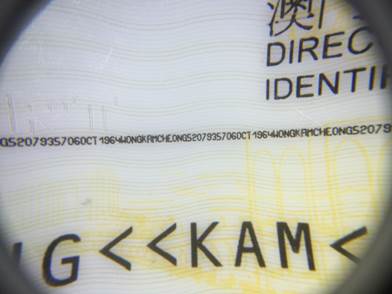 UV Light Mode
The UV light mode with its 4 bright UV LEDs (365 nm) allows an optimal depiction of UV security inks through the lens as well as from the side from a short distance. Also, deviations/observation, e.g., in handwriting (signature), are visible by UV Light. The use of ultraviolet or infrared light sources may visualize erased ink, notably if the ink has been deleted using a chemical solvent. 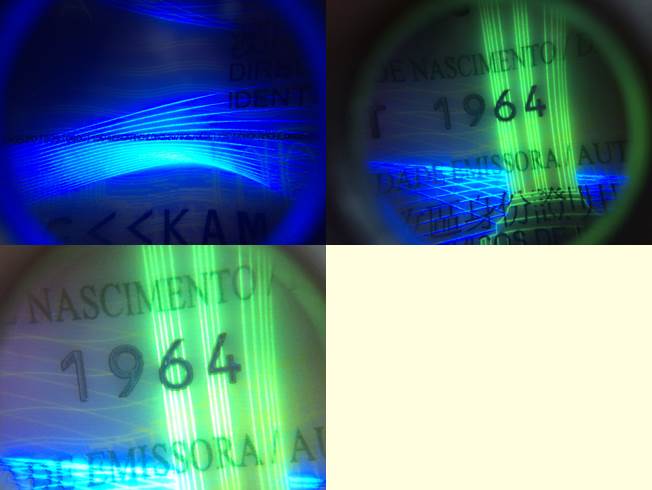 Oblique Light Mode and Rotating Oblique Light
The oblique light mode allows you to identify intaglios, embossing, color changing kinegrams, or holograms. With the aid of 8 LEDs that successively shine on the document in 45° steps, shadows are created at heightened or deepened features (dark field illumination). Color changing elements look different depending on the angle of light incidence.

Torchlight Mode
In certain situations, e.g., at the bright sunshine, the normal incident light mode may be too dark. You will need a higher light intensity to shine through watermarks as well. The torchlight mode allows an optimal illumination even in a very bright surrounding.

RFID Transponder Check
The RFID transponder check allows verifying of the transponders that are integrated into passports or ID cards. Therefore you can check authenticity, proper function, and transponder type in a concise time. Please keep in mind that in some passports a shielding prevents reading from outside. Just open the document to check it from the inside.

Explanation of the light codes:

RFID transponders were detected correctly by placing the device directly on the passport cover. Two passports were opened, and then the detection was successful as in some passports a shielding prevents reading from outside

Steady Light
The steady light function is handy if you want to take a snapshot through the lens with your cell phone or smartphone camera or you do not want to keep the button pressed with your finger. Steady light stays on for 1 minute and is available for all light modes:

Battery Level
The red LED blinks 3 times slowly after releasing a button if the battery is low. Plan to change batteries soon and carry a set of replacement batteries with you. If the energy in the batteries is too low for the proper function of the device, the red LED starts to blink at a button press.

Automatic Power-Off
If some button is pressed inadvertently (e.g., in a case) or the steady light function has been activated, the device turns off after 1 minute to prevent the batteries from being drowned.

Environmental Conditions
The device is not water resistant! Do not immerse the device into water and protect it from water (rain or sea water). However, there is a splash water case optional available. The device may only be operated within the allowed scope of environmental conditions:

Summary & Conclusion
My focus was to elaborate if such a device is useful for collectors of historical documents (in my case, old passports & related travel documents). I do consult museums, foundations, and collectors, so some tools are needed to verify a document is genuine, not altered or forged. By today I use different tools to perform such tests. Inspecting historical documents on the spot (e.g., at collectors fairs) with DOCULUS LUMUS will give me much more freedom & confidence as I have all core functions in one handy mobile device to verify documents quickly.

The 15x magnification with bright light LEDs is just the perfect magnification to see all details. The different light modes make it easily possible to detect deviations or variations in a document or signature.

An RFID Transponder Check is, of course not necessary for my purpose (even when tested as described), but all other functions are most welcome. The lack of water resistance might be an issue for users like the police or border control if using the device outside, but as mentioned, there is an optional splash water case available.

In my opinion, the device is useful for collectors of items like documents, stamps, revenues, and banknotes.

For private collectors, the price of 249€ might be not inexpensive (depending on the price level of the documents you collect). For organizations like police & border protection, it’s a very reasonable investment, especially compared to other devices on the market.