I contacted William Kaczynski via a friend as we have a hobby in common – passport collecting. We all three were sitting together and had a great discussion about the topic. William published his book “Fleeing from the Fuhrer,” which tells not only about Holocaust Postal Documents but also the story of his own family during these dark years in German history. I could also inspect the German passport of Williams’s mother Edith with the infamous red-colored J-stamp; even Williams attached Kinderpass (Children Passport) had this large red J-stamp. One chapter of Williams’s book also tells about “People Who Made A Difference.” A few exceptional people who made a difference in the lives of others. I posted earlier some articles on this topic on my website. Here, you can see the book’s book description, which I like to recommend to all of you. 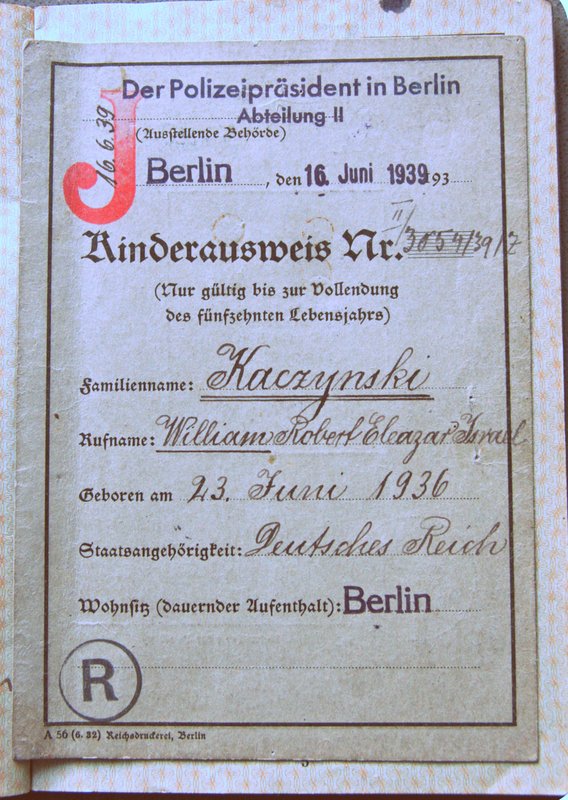 “The departure of men, women, and children fleeing from the Nazi regime was one of the largest Diasporas the world has ever seen. It sparked an international refugee crisis that changed society and shaped our culture and community today. Between 1933 and 1945, the Nazi era in Germany, and the war years, 1939 to 1945, were a time of destruction, upheaval, and misery throughout Europe and beyond. Whether in war or civilian life, displacement and death became everyday experiences for young and old alike. Families were torn apart by enforced emigration or deportation. Parents were separated from their children, husbands, and brothers from sisters. Interned in camps that spread across the globe from Shanghai to the United States of America to the Isle of Man, they became strangers in a foreign land and often the only link they had to their former lives were letters exchanged with friends and family. Therefore, these scarce postal communications assumed huge significance in the lives of both sender and receiver, one that is hard to imagine today in the age of instant communication. Fleeing from the Fuhrer is an amazing collection of correspondence that shows the incredible nature of this worldwide emigration and the indomitable spirit of these refugees. Each postcard, envelope, and item of ephemera tells its own unique story. It is reproduced in full color, making this a fascinating resource for anyone wanting to understand this poignant part of our international history.”