Passport for Captain George William Younghusband (1856-1897) of the Indian Army granting him permission to travel in Russia, he being the first cousin of Sir Francis Younghusband who at the very same time was on a mission to Chinese Turkestan and Hunza to gather intel on Russian activities, with the aim of opening Anglo-Russo trade agreements. Featuring the stamped signature of Lord Salisbury, Prime Minister of the United Kingdom, steel engraved armorial illustrations to header and footer, several Russian stamps and signatures to verso, and the passport holder’s original signature. Printed text is in English. With annotations and official entry stamps in Russian, including one made at Saint Petersburg approximately 24 February and another at Moscow 18 October 1890. Single leaf, with the watermark of J. Whatman and the year 1890, measuring approximately 38 x 28 cm. Creased, otherwise in very good condition, beautifully preserved, clean, and bright. Captain George Younghusband 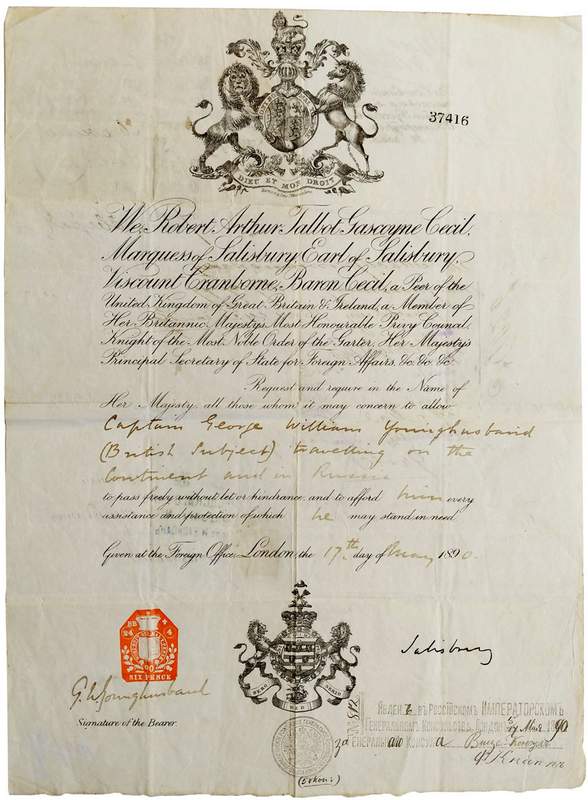 The passport holder, Captain George William Younghusband (1856-1897), served with the 34th Regiment, 2nd Punjab Cavalry. The date of this passport lends itself to the question of whether Captain George W. Younghusband intended on gaining insight on Russia to aid his cousin, possibly as an informant, his cousin being none other than the revered Lieutenant Colonel Sir Francis Edward Younghusband, KCSI KCIE (1863-1942), who was at the same time in neighboring regions reconnoitering Russian activities in Hunza. Younghusband and Macartney wintered in Kashgar and met with Russian agent Nikolai Petrovsky, who had always resisted trade with Xinjiang (Sinkiang). Captain George Younghusband 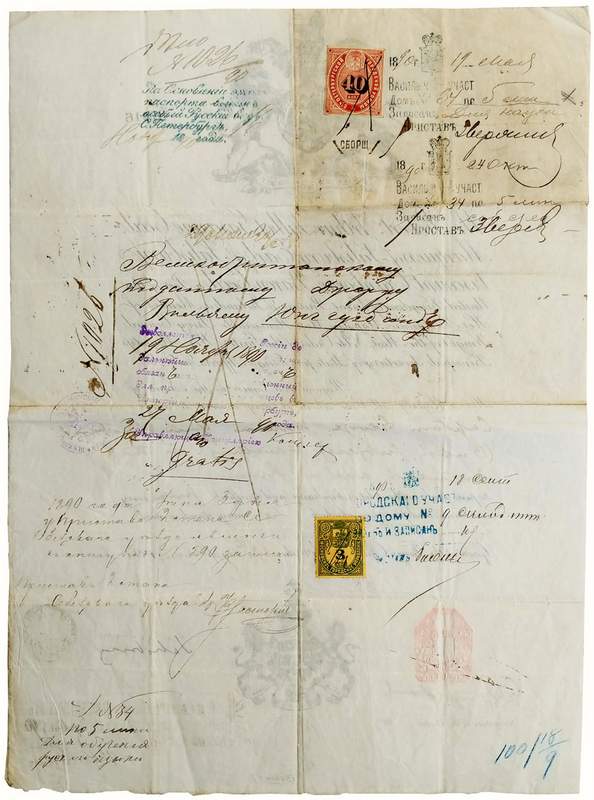 This unusual and interesting surname is a nickname for a young husband, young householder, or a young farmer. It derives from the Old English pre 7th Century ‘husbonda’ meaning ‘husband’. The name was first recorded in the late 13th Century (see below). One Robert the yengehusbonde is recorded in the Charters and Rolls for Suffolk, 1277. Robert le Yungehusbonde is recorded as a witness in the Assize Rolls for Staffordshire, 1298. Matthew Younghusband was christened on March 5th, 1698 in St. Olave, Southwark, London. On May 13th, 1721 in St. Mary’s, Abchurch, London, William Younghusband married Sarah Bell. The first recorded spelling of the family name is shown to be that of Richard le Yongehosebonde, which was dated 1275, Subsidy Rolls for Worcestershire, during the reign of King Edward 1, ‘The Hammer of the Scots’, 1272-1307. Surnames became necessary when governments introduced personal taxation. In England, this was known as Poll Tax. Throughout the centuries, surnames in every country have continued to “develop” often leading to astonishing variants of the original spelling. Captain George Younghusband