This passport issued by the German Empire Government of Kiautschou is one of the rarest documents when it comes to German passport history!

The circumstances on how I got knowledge about this specific document is also quite unusual. A fellow collector informed me with a side note that he departed from this document, and instantly, I became curious and asked for more details. He sent me the pictures of this outstanding passport which went into the beautiful collection of another fellow collector, which I also know for years. I have to admit that I was a bit sad that I couldn’t grab this fantastic and super rare document, but I am glad for my fellow collector and friend, who definitely build further up a solid quality collection of precious old passports. Congratulations!

But before we come to the passport itself, here are some facts about this German Kiautschou Protectorate / Colony.

In the decades before the First World War, when the German Reich took part in the race of the industrial nations to divide the earth, and German politics had an effect beyond Europe, there was an ambitious plan to build a model colony in China and a German city on the Yellow Sea: Tsingtau.

The Germans seemed to have won the battle for a “place in the sun” when they occupied the Bay of Kiautschou in the Chinese province of Shantung militarily in November 1897, thus adding an Asian colony to the African and Pacific territories. Apart from the island of Hong Kong, which the British had already secured as a colony in 1842, it was in 1898 the German Empire was the first of the foreign powers in China to wrest a leasehold with extraterritorial sovereignty from the country.

In the period before the First World War about 200,000 people lived in the German leased area at Kiautschou Bay, 56,000 of them in the colonial city of Tsingtau, the rest in the surrounding villages (see the article by Wilhelm Matzat, Alltagsleben im Schutzgebiet: Zivilisten und Militärs, Chinese und Deutsche). The indigenous population – whose number more than tripled in the German period, which was above average even for Chinese growth rates – was regarded as traditional and religiously bound. This was evident in temples, tombs, and rites. The people lived predominantly from self-sufficient agriculture and local or regional market trade.

In the Chinese district of Tsingtaus alone there were more than 600 shops around 1912. There had been Chinese investments with effects on the economy and jobs during the entire German colonial period. Less than ten percent of the inhabitants of Tsingtaus were Europeans, most of whom came from Germany. The German population at Kiautschou Bay consisted mainly of merchants, administrative officials, teachers, missionaries, and soldiers, as the jurisdiction was not conceived as a colony of settlers. They primarily lived in the European quarter of Tsingtaus or the barracks. The aim and primary task of the local Germans were to develop the region into a self-sufficient business location. Everyone had to contribute through their work: administration, private, and military. 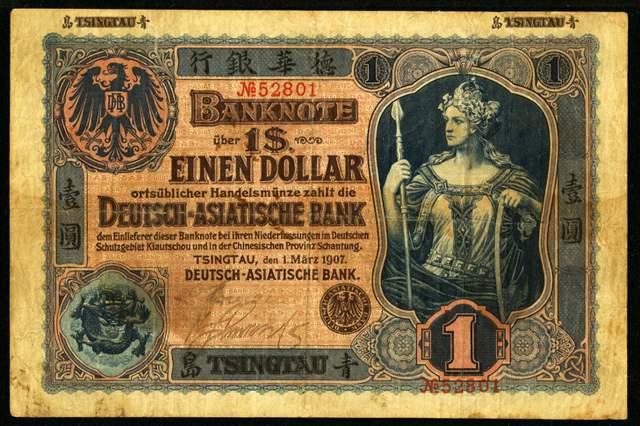 The Germans were generally satisfied with the turnover of goods in the port of Tsingtau. Its development must be seen as a positive indicator. In 1899 192 ships with 226000 tons of freight were registered; in 1911 590 ships and 1257000 tons of cargo were registered. By 1908, Tsingtau was already the seventh-largest port in China. In German port statistics, Tsingtau, which had previously been a free port since 1898, would have ranked fourth in 1910, equivalent to the economic performance of Lübeck or Emden. Also, liner ships connected Tsingtau to the international network through connections to Russia, Japan, and other Chinese cities. Direct links with Germany existed – albeit irregularly – from 1909 onwards by the imperial mail steamer of North German Lloyd.

The operators of the Shantung railway could also be satisfied with the economic success of their company. The freight transport performance doubled between 1905 (310000 tons) and 1911 (718000 tons), half of which was coal. Passenger transport also brought profits, so that the railway company was able to pay dividends with a rising tendency due to good operating income (3.8 million Marks 1905, 7 million Marks 1911). This was a further prerequisite for the ambitious goal of economic development in the hinterland.

When the Germans came to Kiautschou Bay, they found a functioning currency system but found the means of payment confusing. The currency consisted of the units Li, Fen, Chien, and Liang. The foreigners called the smallest value (Li) Käsch and the largest value (Liang) Tael. However, foreign currencies such as the Mexican silver dollar also circulated. On the German side, a unification strived for the leased area. Founded in 1889 in Shanghai, the Deutsch-Asiatische Bank received the right to issue its own notes from 1906 and had German notes and coins produced for Tsingtau (see the article by Michael Kunzel, Deutsche Dollars für Tsingtau).

In addition to the German police, 60 Chinese policemen also served to maintain internal order. The German police chief was authorized to punish minor violations of the law. If disputes were settled in court in the German protectorate, the provisions of the Protectorate Act, which were binding for all colonies, applied in principle. A judge appointed by the German Emperor was responsible for the cases in which Germans were involved. For purely Chinese parties to the dispute, there were two district courts under the leadership of German civil servants. In questions of civil law, Chinese legal concepts were taken as the basis, while in criminal law slightly milder German standards were applied. There was a European prison in Tsingtau and a Chinese prison in the market town of Litsun.

The missionaries in China were an influential group among foreigners because of their extraterritorial legal status and activities. When German missionaries came to the province of Shantung in the late 19th century, there were already 13 mainly British and American Protestant missions with about 140 missionaries as well as Franciscans from Italy.

The then-new medium of photography well documents the life of the Chinese and Germans, civilians and military in the German protectorate. Soldiers recorded their everyday lives in China and mostly kept them in separate albums, while professional photographers worked in East Asia 100 years ago and later published their photographs (see Thomas Hahn, Die erste photographische Dokumentation Tsingtaus: Dr. Behme und seine Bilder).

Japan, which had been allied with Great Britain since 1902, called on the German Reich to clear Kiautschou Bay as early as 15 August 1914. When the Japanese handover ultimatum handed over in Berlin was not answered in writing by the German side, Japanese landing troops – more than 60000 soldiers were in action – started fighting on the north coast of Shantung on 23 August 1914, violating Chinese neutrality and supported by British soldiers.

However, with the Treaty of Versailles, Tsingtau and the Kiautschou region did not fall back to China because Japan had succeeded in asserting itself as a new colonial power: During the First World War, Japan had already established a civil administration in the Kiautschou area, and the number of Japanese inhabitants rose from about 1000 in 1914 to 24000 in 1918.

Tsingtau remained Japanese until 1922. After the American Congress had also described the Versailles result as unjust concerning the Shantung question, China succeeded in putting its concern on the agenda of an international conference in Washington on arms limitations in the Pacific. This led to the Chinese-Japanese Shantung Treaty of 4 February 1922, which came into being under the auspices of the USA and Great Britain. China received the former German protectorate back.

The passport is issued to 36 years old (born 11 Feb 1876 in Haldersleben/Schleswig-Holstein) Navy surgeon officer Dr. Ernst Prahl, who is traveling via Vladivostok or Dalny, Siberia, and Russia to Germany. Issued at Tsingtau, 12 April 1912. The imperial governor (on behalf), signed Guenther. Dr. Prahl was tall, had blonde hair, a mustache, and a goatee. Blue-green eyes and as specific characteristics, scars on the left cheek. On the back of the document, we see some Russian visas and stamps. One stamp is also from the prestigious Metropole Hotel in Moscow, where he seemed to stay. The master list of the  Kaiser-Wilhelm Academy for military medical education listed him in 1910 as  Navy surgeon officer at the East-Asia Navy department in Peking. In 1914 he was a senior medical officer on the Yacht Hohenzollern, used by the German Emperors only. See the video of the ship here. General Colonel Ernst Prahl or as it is later called Marine General Staff Doctor Ernst Prahl died on 5 Jan 1931. 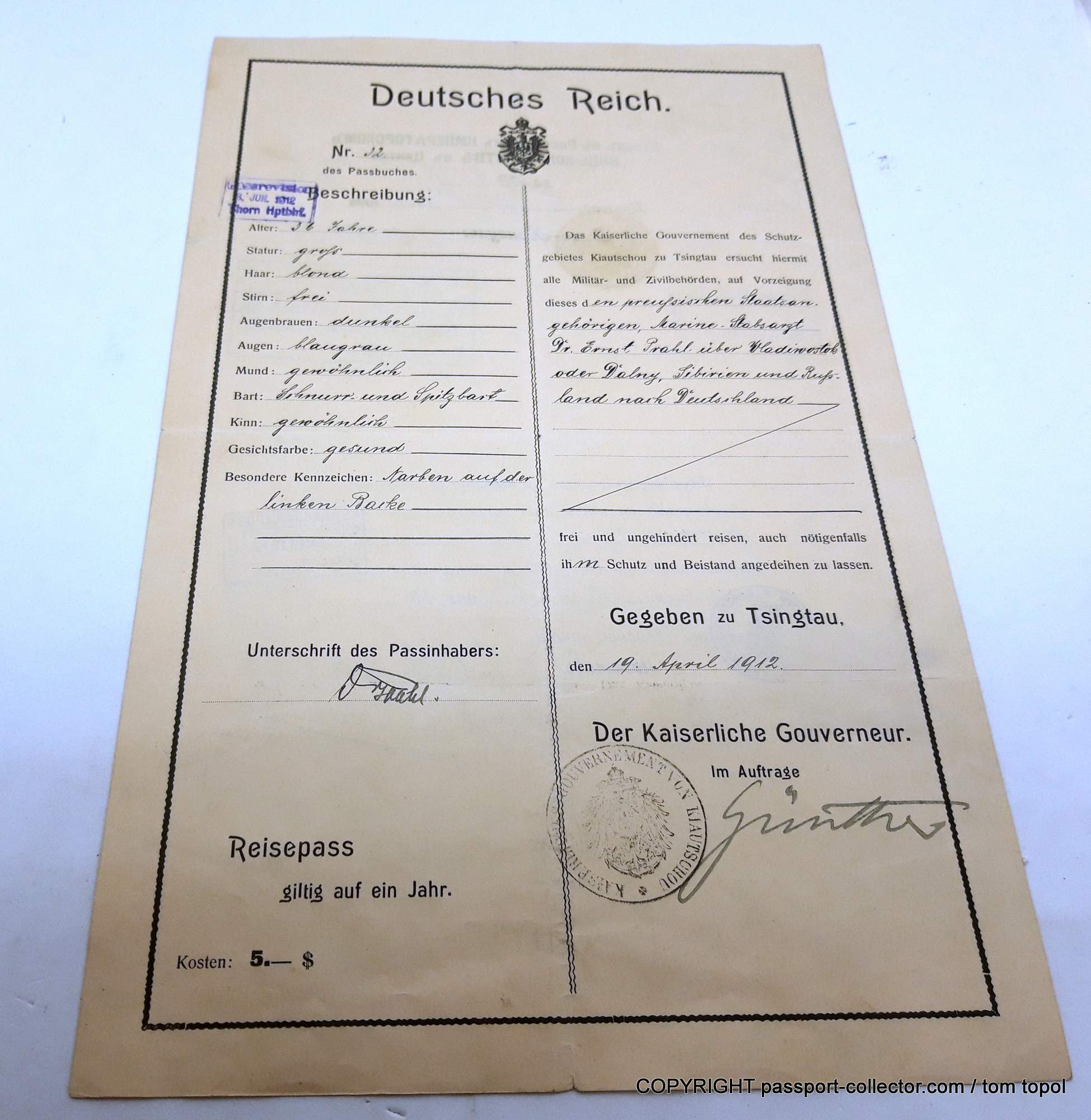 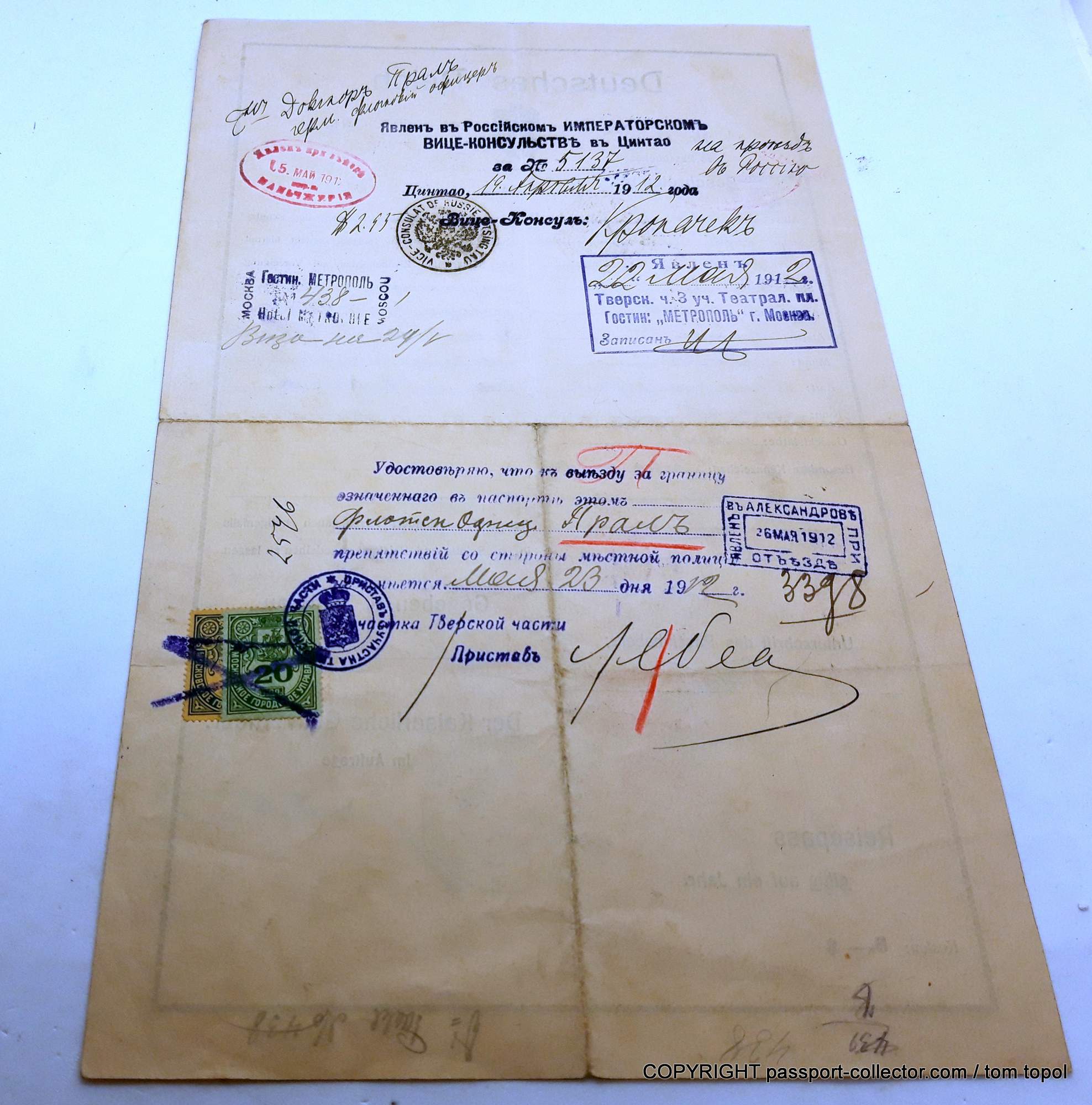 Here you can find further detailed information about the German protectorates and colonies (German). 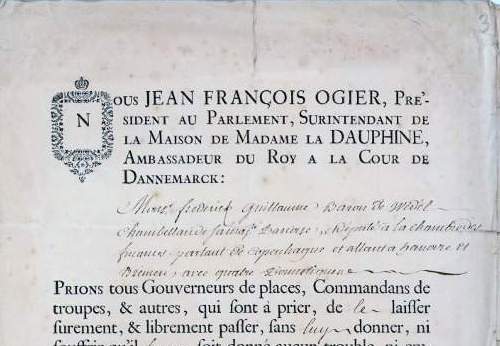 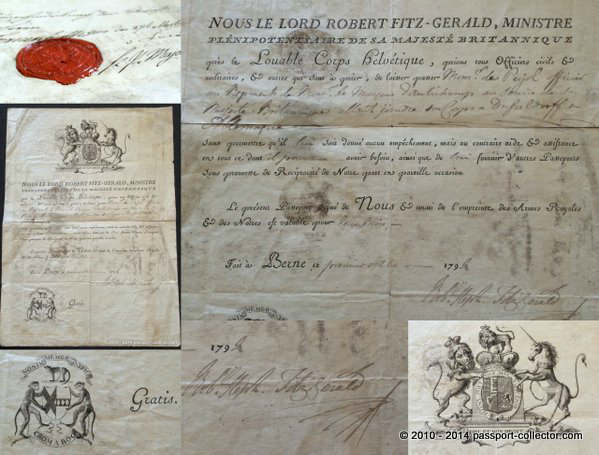