Another precious document came into my East German (GDR) collection. A diplomatic passport issued 1959! This is not only the earliest used diplomatic passport in my collection but it was also issued to the wife and daughter of the official East German delegate to the Council for Mutual Economic Assistance (Comecon) or in German “Rat für gegenseitige Wirtschaftshilfe, RGW” (only East Germany was a member which joined 1950) which was an economic organization from 1949 to 1991 under the leadership of the Soviet Union that comprised the countries of the Eastern Bloc along with a number of socialist states elsewhere in the world. The Comecon was the Eastern Bloc’s reply to the formation of the Organization for European Economic Co-Operation in Western Europe.

According to some historians, Moscow was concerned about the Marshall Plan. Comecon was then meant to prevent countries in the Soviets’ sphere of influence from moving towards that of the Americans and South-East Asia.

As this organization fall apart in 1991 it’s pretty amazing to find this document related to this construct of socialist collaboration.

The passport itself is in excellent condition issued to Johanna Opitz, the wife of the official delegate of the GDR and bears several early diplomatic visa of the GDR, CCCP and Poland. Other normal visas from CSSR and Bulgaria. Her document was valid, after one renewal, till 1963.

I like to thank my German fellow collector who made it again possible to get such treasures for my collection! 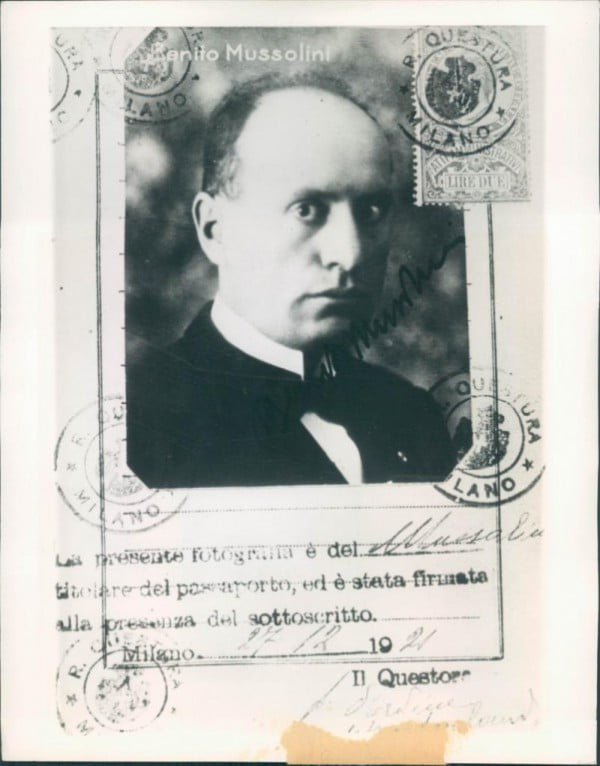 Benito Mussolini Passport Picture (Press Photo) It seems his old passport was offered in 1922 for a sale price of £500(!) Interesting press photo…see full describtion on the pictures below…   Thanks to the input from Jonathan Pile (see comments)…