The Occupation of the Netherlands

German forces crossed the eastern frontier of the Netherlands in several places early on May 10, 1940, while additional troops landed on the beaches north of The Hague and parachutists dropped near Rotterdam and The Hague seizing vital bridges and isolating the capital. The Dutch Army was relatively small and resistance complicated by the fact that German points of attack were widely separated. The government immediately appealed to Great Britain for help and a force of 200 Marines and a composite Guards battalion (2nd Battalion Irish Guards and 2nd Battalion Welsh Guards) was dispatched. On May 12th, the German columns from the east linked up with the parachutists. That same day, the British forces arrived and advanced towards The Hague but quickly realized that without strong reinforcements they would have to be withdrawn. On the 13th, Her Majesty Queen Wilhelmina embarked for England in a British destroyer. That night the Dutch government also left. The British troops returned to Dover at noon on May 14th, the day Rotterdam was bombed by some fifty German aircraft resulting in the deaths of numerous civilians and the destruction of a large part of the city. Utrecht was threatened with a similar fate, but in the evening the Dutch forces surrendered. SS issued passport in the occupied Netherlands

Now, if you are looking at the girl’s passport you could think of Anne Frank, one of the most discussed Jewish victims of the Holocaust.

I actually can’t figure out why URSULA JANKE, a hardly thirteen years old schoolgirl, got her own passport. The passport law at that time was defining that persons of the age of fourteen years can apply for their own passport. Was little Ursula an orphan? Clear is she was going back home into the Reich, first to Düsseldorf, then Stuttgart and finally to Berlin as the stamps of food ration cards show on page six and thirty-two. Ursula was for in Amsterdam in 1928 and lived in The Hague ever since. In The Hague, her passport with number 3463/41 was issued by the infamous SS (Schutzstaffel) for the occupied Dutch territories on May 16th, 1941. A very interesting passport historical document of WWII and the occupation of the Netherlands. 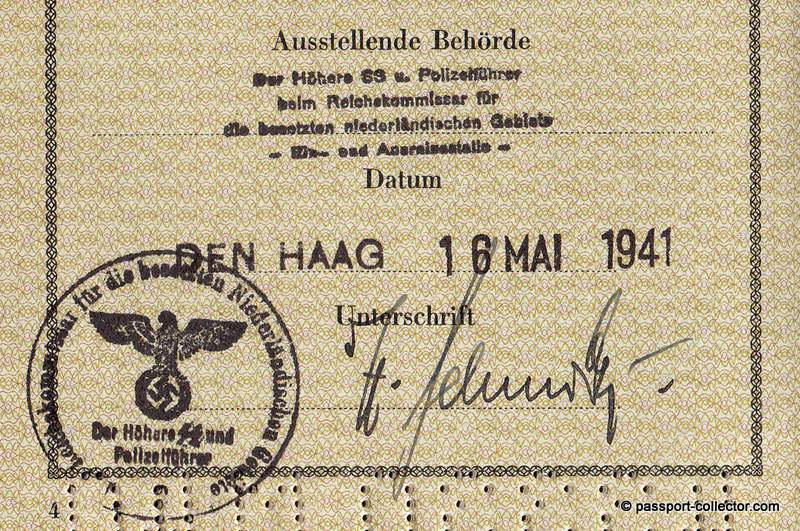 Johann Baptist Albin Rauter (4 February 1895 – 24 March 1949) a high-ranking Austrian-born SS functionary and war criminal during the Nazi era. He was the highest SS and Police Leader in the occupied Netherlands and therefore the leading security and police officer there during the period of 1940–1945. 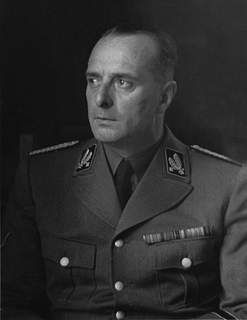 Rauter reported directly to the Nazi SS chief, Heinrich Himmler, and in the second instance to the Nazi governor of the Netherlands, Arthur Seyss-Inquart. After World War II, he was convicted in the Netherlands of crimes against humanity and executed by firing squad.