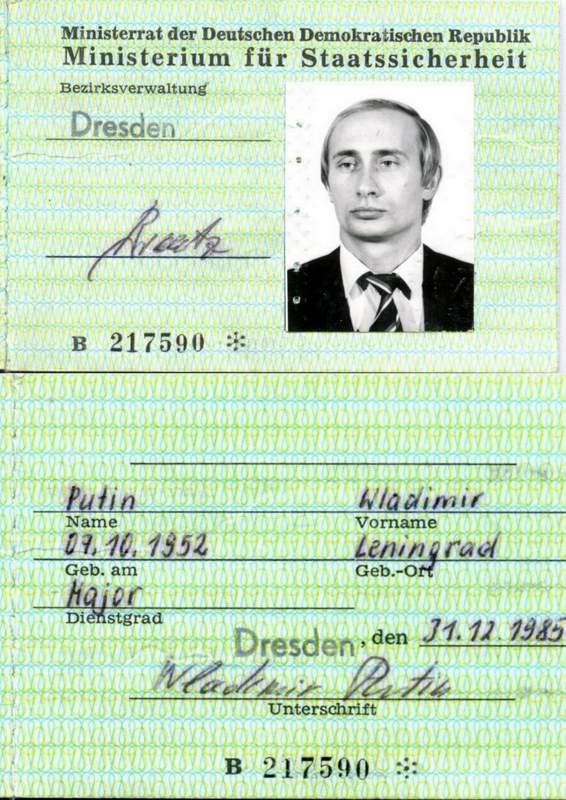 Researchers in Germany have chanced upon a STASI ID card that was issued to Vladimir Putin during his time as a KGB officer in East Germany at the end of the Cold War. The curious find was made at the Stasi documentation center in Dresden, which archives the activities of East Germany’s all-powerful secret police. Archivists were following up an unrelated media inquiry when they found Mr. Putin’s ID card among documents on officer training in the eastern city.

Before entering Russian politics, Mr. Putin spent four years as an agent of the Russian KGB in Dresden in the 1980s and witnessed the collapse of the communist state first hand. Konrad Felber, the director of the Stasi archives in Dresden, told Bild newspaper that the Stasi ID would have given Mr. Putin broad access to the secret police’s offices. “It really is a mini-sensation,” Mr. Felber said. “This meant that he didn’t need to let anyone know that he was working for the KGB.”

A photo of the ID card shows that it was issued in 1986 and continually revalidated up until the end of 1989. A slightly balding but Mr. Putin pouts in a black and white photo on the right-hand side. But Mr. Felber cautioned against jumping to the conclusion that the man who rose to dominate Russian politics was secretly on the Stasi payroll. “This doesn’t prove that he worked for the Stasi,” he said, explaining that it was “common practice” at that time in East Germany to provide KGB officers like Mr. Putin with identification documents.

A spokesperson for the Kremlin told Russian news agency Tass that “the KGB and Stasi were allied services. Therefore one cannot rule out that they exchanged ID cards.” While Mr. Putin’s time in Dresden is still shrouded in secrecy, he is known to have successfully deterred protesters from breaking into the KGB offices during the democratic revolution of 1989. Mr. Putin reportedly told the crowd that they had no right to enter Russian territory while a soldier loaded a Kalashnikov next to him.

The Russian president also speaks almost faultless German, something he has used in the past to woo German politicians. A year after first taking office he spoke to the German parliament in 2001, appealing for more understanding between Berlin and Moscow. (Source: The Telegraph – Dec 2018)