Under Swiss Protection – Jewish Eyewitness Accounts from Wartime Budapest. Carl Lutz’s diplomatic wartime rescue efforts in Budapest is the topic of this book of 400 pages. Written by Agnes Hirschi (Stepdaughter of Carl Lutz) and Charlotte Schalliè (Associate Professor in Germanic Studies at UVic). The book covers 36 stories/testimonies of survivors, which includes the one of Agnes Hirschi as well. “The man who changed my life“ is her story. 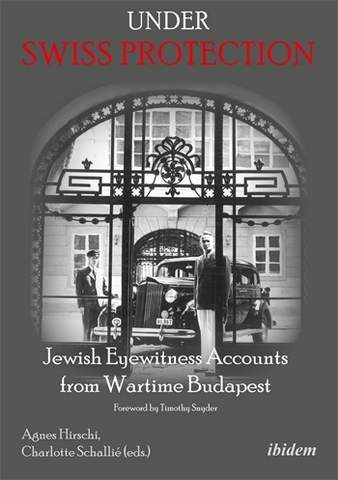 As an expert on passports and their history, protection letters/passes were always included in my research. I own and have seen many such documents from righteous diplomats, not only those issued by Carls Lutz but also such from Born, Langlet, Rotta, Wallenberg etc. The interested document collector will learn about these documents more in detail, which indeed was a “life-saving paper” in German occupied Budapest in 1944.

“The movement began to provide us with false documents” says the testimony of Mordechai Laszlo Kremer, which is for me very interesting, as he describes his experience when he visited the office of the movement, where they issued fake documents. Mordechai had also one personal connection with Lutz in 1970. Lutz wrote a letter to him stating:

“…I feel sorry that I could not save more of my fellow beings, but it was a most dangerous and difficult task to negotiate with SS Eichmann as I did and with the Hungarian Nyilas government, as I did and successfully.”

The chapter “Context and Milestones of the Rescue Activities of Carl Lutz and His Team” gives a comprehensive overview of neutral powers involved in issuing protective documents in Budapest, including the International Committee of the Red Cross (ICRC), the Holy See, Spain, Portugal, Sweden and Switzerland. Turkey had also a legation in Budapest, but played only a minor role. It had no safe houses, for instance.

David Gur, born Endre Gròsz joined Hashomer Hatzair Zionist Youth Movement in Budapest. He was recruited to the “Workshop team”. His testimony is most interesting as we learn about the underground production of forged documents in more details.

Above statement is absolutely correct. That a Swiss diplomat in a foreign country, occupied by Nazi Germany takes a stand for humanity by risking his own life, not once but several times was outstanding brave! Michael Vertes was then eight years old and then known as Miklos Weisz. “I did not personally meet Carl Lutz, but I was a beneficiary of his rescue efforts and I am forever grateful to him”. 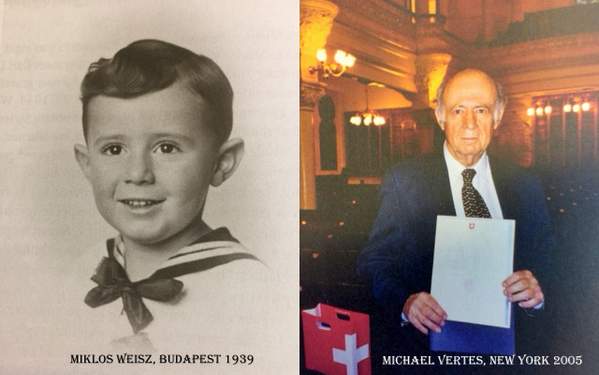 Some of the survivors still have their protection letter and so does Michael.

Another testimony comes from Englishman Prof.Geoffrey Leonard Tier who also wrote a letter to Lutz in May 1945. As Chief of the Department of Foreign Interests of the Swiss legation, Lutz represented the interests also of the U.S., Great Britain and twelve other countries that had severed formal relations with Hungary because of its alliance with Nazi Germany. Tier wrote:

“My dear Mr. Lutz, it is a difficult matter for me adequately to express the debt of gratitude which my wife and I owe you and to Mrs. Lutz for the kindness shown to us during the time you have been good enough to shelter us”
– Prof. Geoffrey Leonard Tier, Budapest 1945 –

Tier and his wife received a spot in the basement at Lutz’s residence in Jan 1945 – where around 30 people were staying at the time. The Tiers remained there until the liberation of Buda in mid-Feb 1945.

If you want to learn more about Carl Lutz and those he saved with his rescue actions from 1942 to 1944 by issuing protection letters/passes and establishing several safe houses for those in need, then I truly recommend you this book which is also available in a Kindle version.

Carl Lutz was indeed a “forgotten hero” but books like this will refresh his history and will bring his brave actions back on the surface. He will not be forgotten anymore! Well done! #carllutz

Lutz drew the document up on his own initiative, which was legally and diplomatically on shaky grounds, they stated – on the letter head of the Swiss Embassy in Budapest and carrying its stamp (but no signature) – that the bearer stands under the protection of the Swiss Confederation for a later departure for Palestine. These personalized Letters of Protection were carried by its bearers and presented in case of controls and raids. In such situations this document was of live saving importance. The Swiss Letter of Protection was later copied by other countries and individuals and became immediately some of the most desired documents in the Hungarian capital, a straw  to cling to for survival. Nowadays these documents are rare to find.

Each person was registered twice, in the above Letter of Protection and then in this Collective Passport – an invention by Lutz for which he will later reprimanded by his superiors in Bern. Collective passports are thick binders, each containing the personal information and photos of one thousand persons. When eight of this binders are full and thus the number of 8000, as agreed upon with the Nazis, is reached, Lutz and his co-workers simply start over with another binder number 1. Two Collective Passports are in the Swiss Federal Archive. 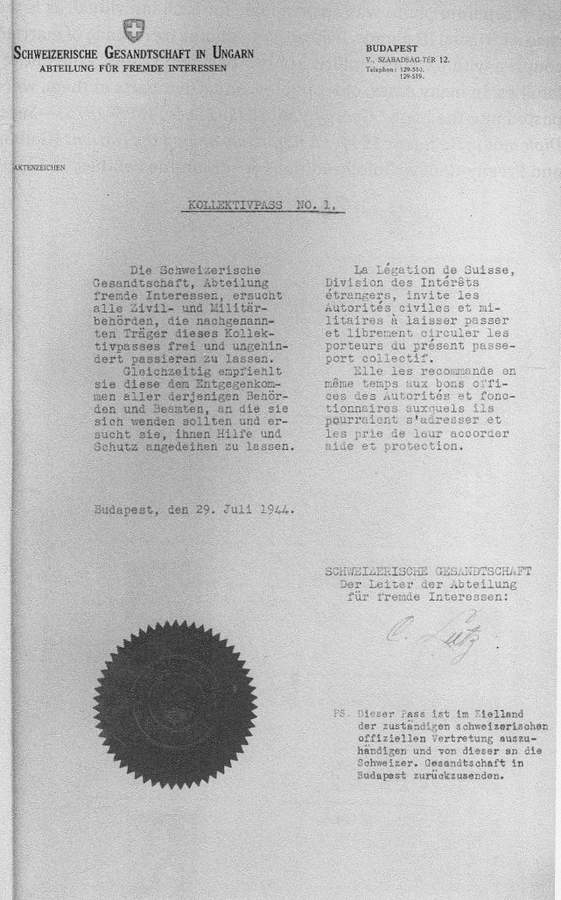 From 1942 onward, Lutz and his staff, about 20 strong, issued 300 to 400 protective passports to US and British citizens, both Jews and non-Jews, and subsequently distributed 1000 such papers to Yugoslav citizens. Very rare to find nowadays!

Comment: Researching this topic for 15+ years I never saw a protective passport issued to Yugoslav citizen myself, but I had/have 2-3 of US and British citizens.

Your book is awesome! I love it! (GvK, Belgium)

Tom, actually I wanted to ask you when we can expect “Part II”? I like it very much, especially the stories behind the passports! Great job my friend and keep writing. (R.S., SG)

Your book definitely tells a lot about the history of passports and I applaud you for the effort that you put into writing the book. (Benjamin Durham, CH)

Tom, I received LET PASS OR DIE today. I’m pleased you invested in good printing, as the images are excellent. I’m looking forward to reading it and passing on purchase details to ex-colleagues from the UK Immigration National Document Fraud Unit. (S.A., UK)

I’ve got the book yesterday and it improved my knowledge about passports history immensely. (Jenwit, TH)

When I started to read the book, I understood how less I know about passports when an expert talks about them with passion. At the first glace, passports, which we see every day become even more interesting. (Pavel, BR)

I am reading the first chapters of the book and I love the theme and how it is addressed. Without a doubt it is a very interesting book. (Marcos, AG)

I am not a passport collector but I saw someone reading your book in the train during my business trip and it caught my attention. So I bought it.
(Przemek, PL)

Your book arrived and what a thing of beauty it is.
(Dave, USA)

Your book is fantastic! (Ross, USA)

The book is fantastic!  Really enjoying it. It will definitely be in our reading list for the online collection. (Karin, USA)

Your book is awesome, I can learn a lot about passport collecting! (Robert, USA)

I have begun my delighted perusing of your book. The stories of Lou Gehrig, the Confederate Brigadier General, Thomas, the bogus passport of Freud plus the Titanic survivor, Edith Brown Haussmann – all fascinating! (Susan, USA)

The story of how Israel issued me a passport with a Colander on my head has been published in a book about the history of passports, titled “Let Pass or Die”, by Tom Topol, a passport history expert. May the Flying Spaghetti Monster bless his sauces. (Michael Afanasyev, @DocSpaghetti)