The Nazis took over Budapest in 1944 and wanted to deport finally as much as possible Jews to death camps in the East. Mostly to Auschwitz  – the largest Nazi facility for systematic mass murder.

But there was one man, a Swiss man – Vice-Consul CARL LUTZ which negotiated a special deal with the Hungarian government and the Nazis. He gained permission to issue protective letters to 8,000 Hungarian Jews for emigration to Palestine. 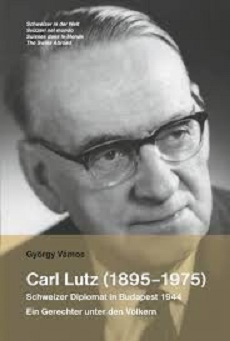 Lutz deliberately used his permission for 8,000 as applying to families rather than individuals, and proceeded to issue tens of thousands of additional protective letters, all of them bearing a number between one and 8,000. He also set up some 76 “safe houses” around Budapest, declaring them annexes of the Swiss legation and thus off-limits to Hungarian forces or Nazi soldiers. Among the safe houses was the now well known “Glass House” (Üvegház) at Vadász Street 29. About 3,000 Hungarian Jews found refuge at the Glass House and in a neighboring building. (I do highly recommend a visit to the Glass House!)

Lutz worked relentlessly for many months to prevent the planned deaths of innocent people. He and his colleagues dodged the actions of their German and Hungarian counterparts. Thanks to his diplomatic skills, Lutz succeeded in persuading Hungarian and Nazi-German officials, among them Adolf Eichmann, to tolerate, at least in part, his formal protection of Hungarian Jews. Lutz’s efforts to undermine the Nazi death machine were so bold and so extensive that, in November 1944, Proconsul Edmund Veesenmayer, the German representative in Hungary, asked permission to assassinate the Swiss Consul; Berlin never answered.

Carl Lutz met Adolf Eichmann a few times for negotiations in Budapest. Lutz diary has some remarkable notes on these meetings…

“Eichmann was surprised at our meeting that somebody confronted him the first time directly with the “Jewish question”. Our first meeting was life-threatening for me! Eichmann compared me with Moses who tried to save his people. Eichmann, surprised from my direct approach & demand on the amount of Jewish people to bring to Palestine, said he will discuss this issue with Reichsführer SS, Heinrich Himmler direct.” Swiss Protection Letter Holocaust

Himmler later told in an interview shortly before his death that he also denied the responsibility from Lutz and did then asked Hitler’s headquarters. They confirmed Lutz’s responsibilities and honored his “excellent service” when Lutz was serving the Germans in the Consulate in Palestine back in 1935.

Due to Lutz’s actions, half of the Jewish population of Budapest survived and was not deported to Nazi extermination camps during the Holocaust. He was awarded the title of Righteous Among the Nations by Yad Vashem. CARL LUTZ – A HERO ON A DIFFERENT KIND OF BATTLEFIELD DURING WWII!

THE PROTECTION LETTER is a document with letterhead or the SWISS CONSULATE in Budapest, Hungary. Issued 23 October 1944. The red Swiss Coat of Arms (COA) is in the letterhead. The read Swiss LEGATION (Consulate) stamp at the lower margin. Those letters are never signed. It’s estimated that CARL LUTZ saved approximately 62.000 Jews from the extermination camps and so from certain death. BUT HOW MANY OF SUCH PROTECTION LETTERS SURVIVED AFTER 75 YEARS? Definitely not many as they are most rare to find – even at Holocaust Museums (and I have visited several)! Swiss Protection Letter Holocaust 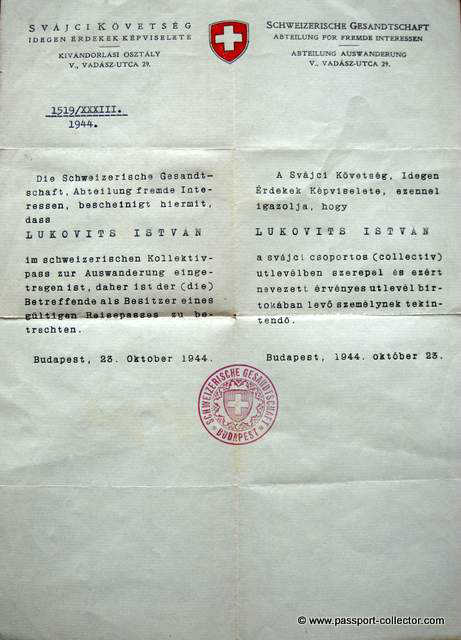 An original document not only of the HOLOCAUST but also of one of only a few “RIGHTEOUS DIPLOMATS” who acted selflessly to do the RIGHT THING even at such very difficult times.Swiss Protection Letter Holocaust 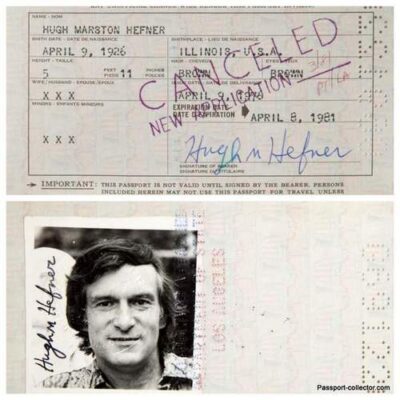