Since 2014 I use quite regular the device for checking signatures, stamps, revenues visas, paper, and security features for my historical travel documents. And believe it or not, I still use the original batteries since then. Of course, I don’t use the device daily like a border guard is doing, but several times a month.

But let us have a look at the updated device with comes this time in blue color in a small box, including batteries and wrist strap. I also got an optional belt bag. I want to find out if the 22x magnification is the better solution for my use. Of course, it always depends on what you use such a device, and sometimes the magnification might be too high as you lose the overall picture of the inspection spot. But let’s see…

Like in the test report in 2014, which is here, I use a Thai 1000B banknote and some more pictures of a current Thai passport again. I use a Samsung S9+ with standard focal distance. If I use the camera zoom, then I mentioned it at the relevant picture.

I used further an old Austrian passport for testing so that you will learn at the same time also a bit about passport history. The Austrian passport is quite interesting as it was issued in 1948 in Shanghai. Its Jewish bearer was most likely fleeing from the Nazis. Shanghai was during the Nazi area, a safe harbor for Jews, at least for some time. But Shanghai also had a Jewish Ghetto from 1941-1945 during the Japanese occupation. His passport also shows a visa from Dec 1948 for the just founded State of Israel (May 1948).

Further, we see border stamps from Switzerland, Greece, and Italy. Finally, a US immigration visa from 1954 and the US stamp from Dec 1954 proved he made it indeed to the USA. The passport was renewed and valid until 1958. Consular passports are always exciting, but this early post-war Austrian travel document issued in Shanghai, China is an extraordinary document of individual personal history and passport history.

Another interesting fact is the stamp on the inner cover page “SS TETI, 3rd class”.
The ship TETI was the first ship that arrived in the State of Israel, at the Tel Aviv anchorage, on the day of the Declaration of Independence. The overseas recruits & volunteers who were on board had been supplied with false visas produced by the “laboratory” of Ha’Mossad Le’Aliya Bet in France (this type of entry into Palestine was known as Aliya Daled). They did not need these visas now and entered the country legally. A rare evidence of Jewish early post-war return from a refugee abroad due to the Nationalism and Holocaust into the Holy Land and in this case with final destination USA. More about the Shanghai Ghetto here…

Here are some detail pictures of the Austrian passport, all made with the 22x magnification.

Summary & Conclusion
My focus was to elaborate if such a device is useful for collectors of historical documents (in my case, old passports & related travel documents). I do consult museums, foundations, and collectors, so some tools are needed to verify a document is genuine, not altered or forged. By today I use different tools to perform such tests. Inspecting historical documents on the spot (e.g., at collectors fairs), DOCULUS LUMUS will give me much more freedom & confidence as I have all core functions in one handy mobile device to verify documents quickly.

The 22x magnification gives you just the perfect image to see crisp details of a single inspection spot on a document. The device can set the cover of the battery box in position 1 (see picture), which enables the user to place a cell phone straight on the device easily. Besides you can press any light buttons 3-times quickly to activate the steady light function (for 1 minute) to make the best possible pictures. The 22x magnification has to be centered more accurate to find the optimal focus point, compared to the 15x magnification. The combination of the quality glass lenses and the bright LED lights truly makes a difference to other similar testing devices. 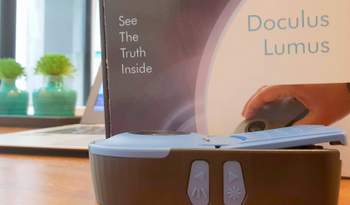