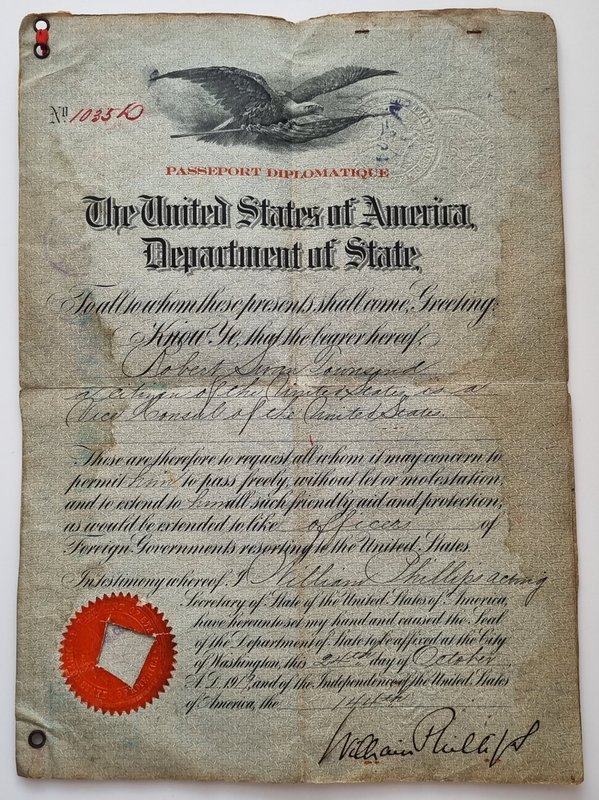 As often, a reader wrote to me asking for my expert opinion, but I never imagined the outcome of this case… Passport Robert S. Townsend

“Good morning. My name is Scott, and I recently acquired through auction a 1919 US Passport issued to Robert Swain Townsend.” This was the initial email from an American gentleman asking if the document had any value and if he should donate it to the DoS. His document description was pretty detailed, and I assessed it as nothing extraordinary. Hence I didn’t ask for pictures as well. However, after my reply, he sends me a few pictures anyway, and the passport turns out to be something extraordinary.

A diplomatic passport of a vice consul going to his post in Albania with eight pages full of stamps and visas. Passport Robert S. Townsend

Scott writes further…“When I purchased this, I intended to research the holder and see if there was any historical value to this document and to find a person or place to preserve it, hopefully.

After we exchanged several emails in which we told stories from each other, Scott wrote…“Heck, I’ll send it to you if you think it’s a good collection piece. Like I expressed, I’d like to see it appreciated.” How kind is that? Amazing! Kindness still exists. I promised to send him my new eBook in return, and I did. Passport Robert S. Townsend

The diplomatic passport was issued and signed by acting Secretary of State William Phillips, and according to US passport statistics records, 97.952 passports were issued in 1919. Phillips was also an ambassador in Luxembourg, the Netherlands, Belgium, Canada, and Italy (until 1941).

The United Nations Archive in Geneva has an exciting file – An Appointment of an expert to study the economic situation in Albania – Offer of service by Mr. Robert S. Townsend in this connection. Ref R374/10/22258/19892, where Townsend addressed the League of Nations in 1922 as a “Consular Organizer” to the Albanian Government. He also applied for an “adviser position for Albania” with the League of Nations.

Furthermore, Townsend gives his detailed introduction to the Albanian Vice-Consul Tashko in New York as follows…

I entered the American Consular Service in 1915 in Carlsbad, Austria. There I remained until the breaking of diplomatic relations in April 1917, when I was transferred to Gotenborg, Sweden. I left Sweden in August 1919 and remained in America until November, when I was sent to Albania, whereas you know I stayed until April 1920. I was then detailed in Saloniki for three months, when I was sent to take charge of the office in Aden, Arabia. From Aden, I was sent to Johannesburg, Transvaal, South Africa, where I remained for about two months, after which I was placed in charge of the Consulate at Lourenco Marques, Portuguese East Africa. From that place, I resigned in March 1922, arriving home (USA) in June of that same year.

I have done everything one can do in a Foreign Service. In Austria, we had very little routine Consular work doing more diplomatic work due to the delicate situation at that time and looking after the Allied prisoners of war, which necessitated constant and familiar intercourse with the officials in Vienna. In Sweden, I aided in developing the American passport regulations used during the period we were in the war. I was also loaned to the Naval, and Military attaches for intelligence work, the Shipping Board, and the War Trade Board, which gave me control of all the shipping and ships, their cargoes, crews, etc., clearing for the United States. As I told you, I was sent to Albania on ethnological intelligence work, where I became interested in your country.

While there, as you know, I traveled all over your country from north to south and east to west; I know the conditions and the difficulties under which your officials are working. I think I understand the situation better, perhaps, than any American. In Aden, Saloniki, Johannesburg, and Lourenco Marques, the work was purely routine, except that the representation was more significant as it always is in the East and British Colonies Consular offices. From this rather varied and vast experience in the Consular Service, you can see that I know almost every angle of it. Through my work, I have met many officials abroad and at home. I have my commissions and many letters from the various officials I worked with if you desire copies of them.

As for myself personally, I was born on March 11, 1894, in Washington. I attended public schools for nine years, then went to the Army and Navy Preparatory School in Washington, from which I graduated in 1912. I then went to Dartmouth and George Washington University, taking exceptional work for the Consular Service. I speak German and Swedish, as well as I do English. I also speak some French, Danish, and Norwegian. My French, with a bit of practice, would be pretty good. It is because I have never been where I needed not to improve. Ever since I landed on your country’s shores, I have been interested in it. You are a deserving people. When I left Albania, I told many people that if I ever could help the country, it would be the one thing I desired to do. For almost a year now, ever since I arrived home, I have endeavored to do something or organize some method of material assistance to help. In every instance, I have met with almost childlike refusals of cooperation from the one person I should have thought to have been most interested in Albania’s welfare.

And further…
As to remuneration. I should gladly accept the position for $200 per month and my expenses. All I want is enough to live on. The great thing about me is to be able to be in a position to help and to show the world that Albania is and will become one of the best
states of the great world family. Yours most sincerely, signed, Robert Swan Townsend.

ROBERT S. TOWNSEND died suddenly at his summer home in New Harbor, Maine, on September 15, 1942. He was born in Washington on March 11, 1894, the son of William Wilder Townsend and Charlotte P. Swan. He attended Central High School and Army and Navy Preparatory School in Washington. For many years he was in the consular service in various parts of the world; later, he did much writing. He is survived by his wife, Mrs. Dorothy Bowling Townsend. Passport Robert S. Townsend 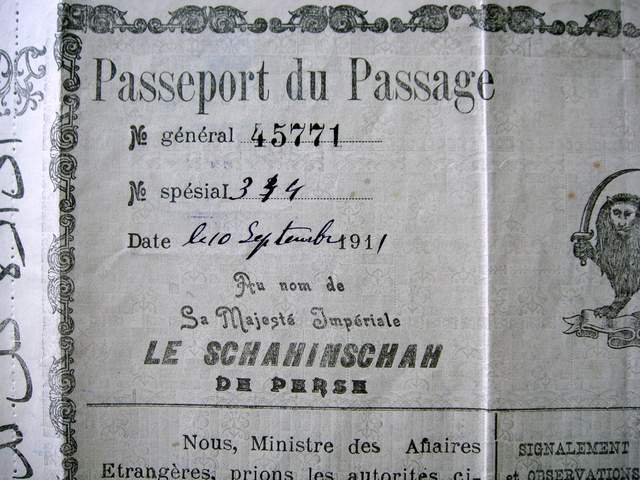