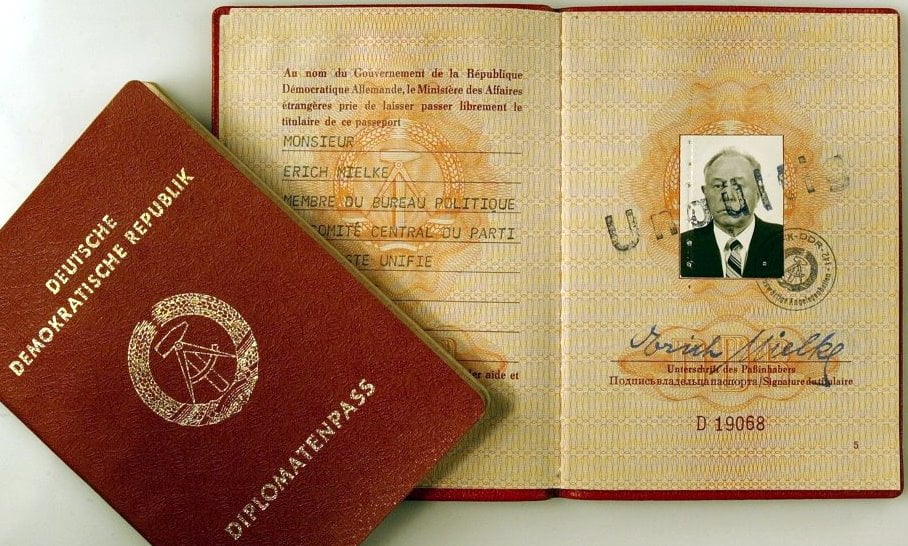 This is the East German Diplomatic Passport of Erich Mielke (December 28, 1907 – May 21, 2000), a German Communist politician and Minister of State Security of the German Democratic Republic from 1957 to 1989. A hard-line Stalinist, he spent several years in the Soviet Union. Mielke held the military rank of four-star Army General. In 1993, he was convicted of the murders of police officers Paul Anlauf and Franz Lenck in 1931. The passport and other items from Mielke’s property, including his wife’s passport, were sold by a collector in the summer of 2004. The final result is unknown. However, the passports of East Germany are very interesting, especially the early years, which are nowadays hard to find. Luckily I have a comprehensive collection of East German travel documents, including another diplomatic passport of another important party figure – Guenther Mittag. Diplomatic GDR Passport Mielke

Erich Mielke, the former head of the dreaded East German security agency known as the Stasi, has died at 92, German officials said yesterday. He died May 21 in a home for the elderly in his native Berlin. From 1957 until the Berlin Wall fell in 1989, the Stasi wielded enormous power, making Mielke the most influential person in East Germany after the Communist Party leader, Erich Honecker. Diplomatic GDR Passport Mielke
Born into poverty in pre-WWI in Berlin, Mielke joined the Communist youth movement at age 15, and his career epitomized the grimness of Communist rule in East Germany, where assassination, kidnapping, execution, denunciation, and intimidation were used to achieve and maintain power under the long, menacing shadow of the Soviet Union.

Mielke and the ministry for state security kept the 16.5 million people of East Germany obedient to Communism and repressed dissent for more than 30 years. Not only did the ministry pursue an effective campaign against those it regarded as enemies of the state, but its army of 90,000 agents and 260,000 informers finally turned East Germany into a country that spied on itself.