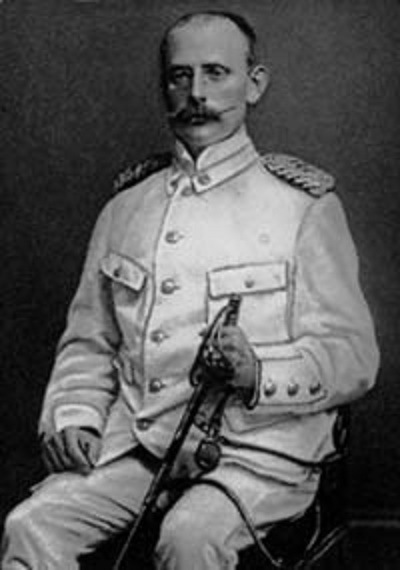 The acquisition of a German colony in East Africa in 1885 is primarily associated with the name of Carl Peters. Peters, a pastor’s son from Lower Saxony with a doctorate in history, was one of the most enigmatic figures in German colonial policy. In his person, the characteristic motives that drove the colonial movement and made it grow so strongly in the mid-1880s that it seemed advisable even to the colonial skeptic Bismarck to go along with this course: the urge of the younger generation to overcome the borders that had been drawn for the German Empire in Europe, the ‘desire to provide the Empire with the retribution to which it was supposedly entitled, also and not least economic interests and personal advancement. German East Africa Colony

In Peters’ and some other colonial enthusiasts’ case, racist undertones could not be ignored: He was, Peters declared in retrospect, “fed up” with being “counted among the pariahs” as a German and wished “to belong to a master race. This thinking also shaped Peters’ extremely violent and cruel practice of rule in German East Africa.

As a colonial power, the German Empire, founded in 1871, was a late starter. It was only in the course of the “colonization fever” triggered by the formal seizure of Egypt by Great Britain in 1882 that the Germans also joined the race for the last remaining colonial territories, especially in Africa. The pioneers of German colonial activities were mostly Hanseatic merchants who had often been active in various regions for decades, and some were also missionaries and explorers. All of them now pressed for a stronger commitment of the German Empire to support and protect their ventures and acquisitions by the state for official protection of the contracts they had concluded with native tribal princes.

Only recently, Chancellor Bismarck, who had long rejected colonial acquisitions because he did not expect any real political or economic return from them, changed his mind under the pressure of the general colonial euphoria and the organized colonial movement. Within a year, the German Empire acquired colonial claims in Southwest Africa, Togo, Cameroon, East Africa (Zanzibar and Tanganyika), and some territories in the South Sea. In often complicated negotiations and disputes with the competing powers, their recognition was achieved. Their recognition was achieved.

In East Africa, too, two large Hamburg trading companies had been involved for a long time in the island of Zanzibar. The decisive initiative for creating a large German “protectorate” on the opposite mainland did not come from these merchants but the colonial movement. It was put into action by hot-headed adventurers. At the end of 1884, the 28-year-old Carl Peters, together with two comrades-in-arms, succeeded within a few weeks in “acquiring” 140,000 km2 of land, one-seventh of the later colony, from native chiefs in the hinterland of Dar es Salaam. On February 27, 1885, the acquisitions were secured by an imperial letter of protection. With this letter, the “Deutsch-Ostafrikanische Gesellschaft” (DOAG), founded under the leadership of Peters, received the (DOAG), the status of a chartered company which was to exercise sovereign rights in the area in question and to carry out its economic development of the area.

However, the first economic advance of the DOAG already led to massive reactions of the local population. They culminated in 1888/89 in a real uprising of the coastal inhabitants, in which, above all, the Arab traders, in particular, violently resisted the new German competition. The empire, therefore, felt compelled to send an expeditionary force under the command of Reichskommissar Hermann von Wissmann to put down the uprising, ostensibly to combat the slave trade. Administratively, as in the other overseas possessions, this was accompanied by the gradual transition from the letters of the protection system to direct imperial colonial administration: on February 14, 1891, the first civil governor of German East Africa was appointed.

But even after that, the landscapes around Kilimanjaro did not come to rest. Again and again, the increasingly practiced forced recruitment of laborers, the ruthless levying of head and hut taxes by non-local collectors, or the massive direct and indirect interventions in the established economic structures triggered protests and uprisings of the local population. Between 1891 and 1897 alone, 61 large-scale “punitive expeditions” and subjugation campaigns were carried out in various colony regions. Since the Schutztruppe resisted the guerrilla tactics of the rebels with a “scorched earth strategy,” there were extremely high casualties among the native population. The number of victims today is estimated at about 300.000.

Thus, oppression and violence were everywhere and almost permanently present in everyday life of the colonial rule. In the German public, these conditions were perceived only sporadically, for example, in 1895, when Carl Peters, who had been sent to the Kilimanjaro region again the year before as Reichskommissar, was suspended from his duties because he had his African mistress and her lover executed. Significantly, Peters, who had initially been dismissed in 1897 after a formal disciplinary proceeding, was rehabilitated just a few years later. At the same time, the economic activities were anything but successful, contrary to the high expectations of the investors, who had initially invested several million marks and founded numerous plantation companies, primarily for the cultivation of coffee in the Usambara highlands. Successful. All the companies had to pay a high price for their lack of knowledge of the country and their lack of expertise. In addition, coffee prices unexpectedly plummeted. Attempts to cultivate tobacco, coconut palms, and cotton also largely failed.

Only after the turn of the century did the situation improve. At least some plantation companies could operate profitably in coffee cultivation or with new sisal plantations close to the coast.

However, it was now much more difficult to raise new capital because of the initial negative experiences. Nevertheless, the upswing continued to such an extent that the colony could increase its expenditure of about 2O million marks from its own revenues on the eve of the First World War. However, this figure did not consider the material and immaterial costs of the local population.

This is a pretty rare document, and I am happy to have it in my collection.