During research, I found this fantastic story of a GDR citizen on duty traveling to Japan. Her record is outstanding as it’s a first-hand experience when traveling with an East German passport just in between the fall of the wall and reunification. GDR passports were still valid until the end of 1995, according to the reunification contract. GDR Service passport story

A Dienstpass (Service passport) was issued to East Germans who worked abroad. That’s why I got mine when I worked in Yugoslavia and Japan. But when I traveled to Hungary to attend a congress, I had to use my ordinary passport. Talking with my daughter about our life in East Germany, we found out that most of the ´hardware´ produced in East Germany does not exist anymore. So, whenever we see an old car, a towel, a toy, a record, or anything with the label ´Made in GDR,´ we have a feeling of: “Oh, what a time! This was OUR life!” GDR Service passport story 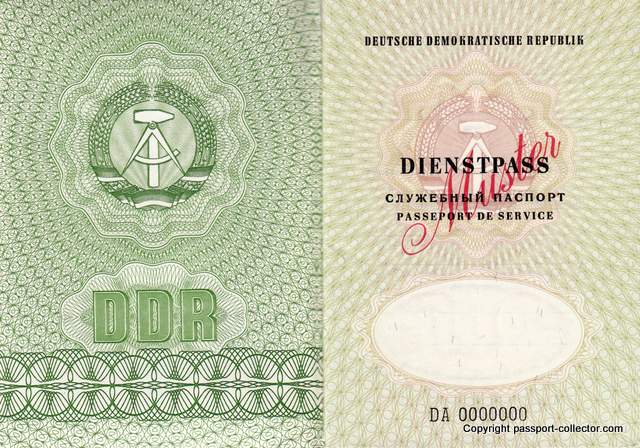 As to myself, I am not able to show any interesting East German objects. Well, in my garden cabin I have some simple china made in East Germany. But I would not say it might be of any interest to any people. But yesterday, when I was looking for some photos, I found my old passports, parts of my personal East German history.

Oh, if you knew what these passports meant to us! They were the door to the tiny world of Communist countries. And sometimes, if you were a lucky person, you were allowed to travel to other countries, i.e., to the so-called capitalist countries, too. GDR Service passport story

I had two passports. Both of them were, when I was at home, in a safe at my university. I couldn´t grab them and travel to my colleagues, neither to the American nor to the Hungarian ones. I had to apply for a journey. Maybe, I was permitted to travel – or not. One never knew the decision …

But when I had the opportunity to work abroad, I got a Dienstpass, and this meant you were a kind of privileged person. I didn´t know these privileges, but perhaps it was just to be treated more kindly by the East German custom officers. Well, and in 1990, while in Japan, I was at home for three weeks. Even if nobody had expected me to return to Japan because of the situation in East Germany, I went back to Japan, of course. GDR Service passport story

Airport Narita. The Japanese immigration officer took my passport, looked at it intensively, looked at me, and asked: “Where do you come from? I don´t know this country!”

I didn´t know what he meant. I decided to smile and to wait. That´s the best way to solve a passport problem; I had learned about different, more or less embarrassing situations at the borders of different countries. GDR Service passport story

“Dienstpass!” he said now. “I don´t know Dienstpass! Where is this country?” I explained to him, I came from Higashi Deutzu, from East Germany. “But I cannot find East Germany in your passport!” he said angrily.

Even today, I do not know if he had wanted to play a play with me. Or was it a kind of psychological test? Coming back to my Japanese colleagues, the one I liked best looked at me with a smile and in a kind of surprise, and he said: “Oh, Linda, we really didn´t expect you to come back to Japan and to our university – now that you are free to travel around the world.” GDR Service passport story

And I lived in Tokyo, worked there, and watched on TV what was going on in Berlin. To me almost a fairy-tale, but not reality. Even weeks later, I could not imagine that I would return to a country that had stopped existing.