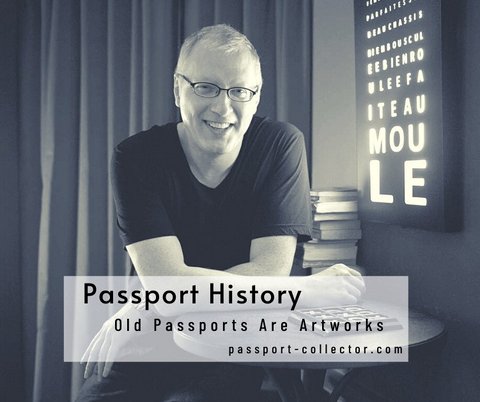 Hello, my name is Tom Topol, a long-time passport history expert and author. Since 2003, I have discovered the “Art” and history of old passports at a flea market in Kyoto, Japan, ever since I studied passport history. “Travel documents tell the stories of their bearers. Who were they? What was their profession? Why did they travel, and to where? Where was the passport issued, and from whom? There are many more questions on geographical/political issues, processing, and security printing. It is much more than just paper collecting. Its advanced research on travel documents.” Nowadays, our passports are standardized but look at an old passport back in the 19th century – at that time, they were some “Artwork” and unique. They were handwritten on fine paper with colorful stamps, signatures, and beautiful photographs. Each collector has to define the range of their collection – you can’t have it all.

My archive/collection includes about 700 historical travel documents and is constantly growing. My earliest travel document is from 1646. One of my key projects was assisting the U.S. Department of State in Washington D.C. with their historic passport exhibition, where I received an award from the U.S. Government. The latest project was for the world’s oldest watchmaker, Swiss company Vacheron Constantin plus several others for museums around the globe.

Legal Note On Passport Collecting
This site aims to establish a source for collectors, historians, researchers, and other interested parties to share and exchange information, knowledge, and collectibles and raise awareness of passport collecting as a leisure activity.

Passports As Government Property
Most countries declare by law that passports are government property and may be confiscated, withdrawn, or revoked at any time, usually on specified grounds. A confiscation, withdrawal, or revocation is generally subject to judicial review. The definition of “Government property” is stated in most passports or country-specific passport laws and came up (to my best knowledge) within the last 30-40 years. Old passports (100 years old and more) do not have such a statement at all – not on the document nor in the passport laws at that time. Tom Topol, passport expert

Is Passport Collecting Legal?
YES, don’t worry, it is – as long the documents are obsolete/canceled!

I contacted several government agencies, and they often cannot clearly communicate. It is safe to say that passport collecting is “accepted” as long as you have a good reason for your collection, e.g., for historical research. Usually, you will get your old and obsolete marked passport back when you pick up your new one. Passport offices are not interested in their “property” by collecting “old paper.” Tom Topol, passport expert

Statement Of The German Interior Department (translated by the author)
“The retention of title extends only to passports and identity cards of the Federal Republic of Germany. The passports and identity cards pattern from before 1945 and the former German Democratic Republic (GDR – East Germany) are very different from the current ones. Those “historical” documents are therefore NOT protected.”

The statement of the German Interior Department can be used as an example for travel documents of other countries. However, each country has its views and laws that must not conform to this example! Patterns after 1945 till the 1980s are very different from the current one, so there should also be no retention of title, in my opinion.

Documents presented on this website are obsolete and only for research, education & collection purposes! I do NOT buy or sell any biometric passports! Selling/purchasing current and valid passports is illegal! Tom Topol, passport expert