Faustin-Élie Soulouque (15 August 1782 – 6 August 1867) or Faustin I. He was a career officer and general in the Haitian army when he was elected President of Haiti in 1847. In 1849 he was proclaimed Emperor of Haiti under the name Faustin I. He soon purged the command of the ruling elite, installed black-skinned loyalists in administrative positions, and created a secret police and a personal military. In 1849 he created a black nobility in the country. However, his unsuccessful attempts to reconquer the neighboring Dominican Republic undermined his control, and a conspiracy led by General Fabre Nicolas Geffrard forced him to abdicate in 1859.

This pretty and very rare passport was offered online in 2014. A collector paid $821 for this document, and I would say it’s a museum piece. Also shown is another Haiti passport from 1924, which is from the collection of a fellow collector. Earlier I posted a beautiful Haiti 1955 passport.

Travel documents of Haiti are everything else than ordinary. If you are collecting rare quality documents, then this would be something you have to watch out to extend your collection. 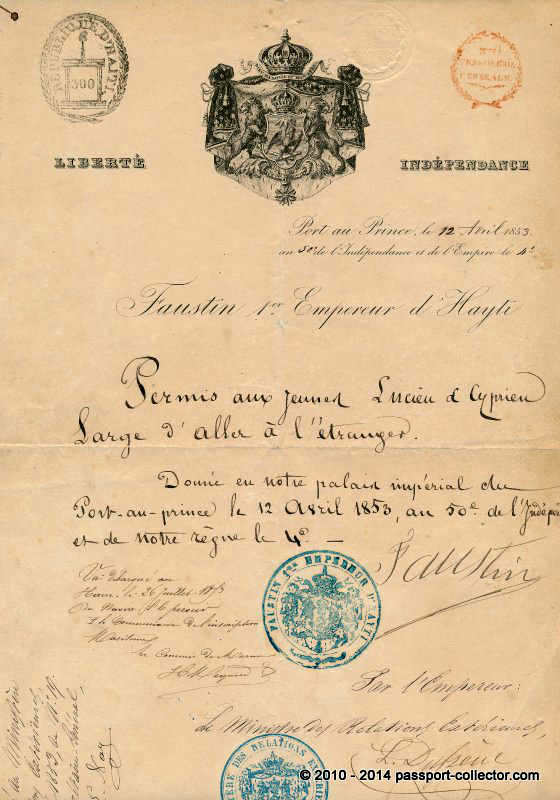 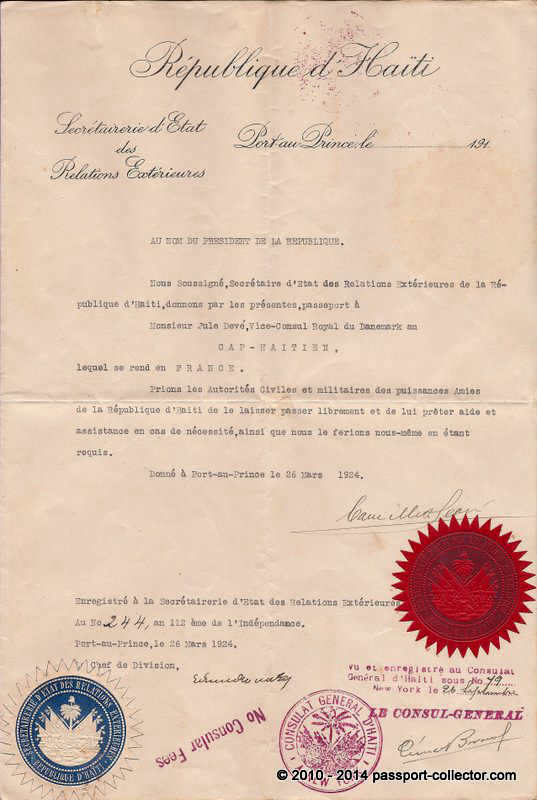 Haiti passport 1924 for the Danish Vice-Consul

Interesting fact. In 1937, the Haitian government began issuing passports and visas to approximately 100 Eastern European Jews escaping Nazi persecution. According to the Joint Distribution Company, “Haiti played a small, yet critical, role in saving Jewish lives during the darkest chapter in the Jewish story.” The JDC’s organizational records show that up to 150 Jewish refugees managed to escape Europe to come to Haiti. Unfortunately, though, it seems that more Jews were unable to acquire visas to Haiti due to the cost. Prof. David Bankier, of the Institute of Contemporary Jewry at the Hebrew University of Jerusalem, said that after 1938, “the cost [of a visa] was outrageous: If you wanted to go to Haiti, you had to pay $5,000.”

Most of these European Jews remained in Haiti, grateful to the government, until the late 1950s. Many of the Haitian Jewry left, however, so their children could marry Jews and not assimilate, and to find more significant economic opportunity. haiti faustin president passport