Recently I got a couple of German passports with the big red “J” stamp. I was somehow astonished about the excellent and fresh condition of the documents. After more than seventy years, there was almost no wear to see, even the clips to attach the passport pictures were not rusty at all. I paid quite a price for the documents and had some doubts if they are genuine. I also consulted a fellow collector, and we were discussing how to analyze the documents at my desk.

I was calling some institutes if they could help, but I can tell, it`s not that easy. One institute was focusing on Swiss art only; another one was able to do an analysis of the handwriting only but to find someone who can analyze the different ink types, and the paper is a challenge. The third one I called was very supportive and named me three phone numbers of specialists. Two numbers were from the Federal German Police in Munich and the other one from the Federal Institute for Materials Research and Testing in Berlin. I called to Munich, and they confirmed what I already had in mind about processing time and costs. 6-8 weeks and around 1500€. Bummer! collectibles passport Swiss police

However, I got another source from Munich. They told me the Swiss Cantonal Police would also have a few specialists. Will do another try… 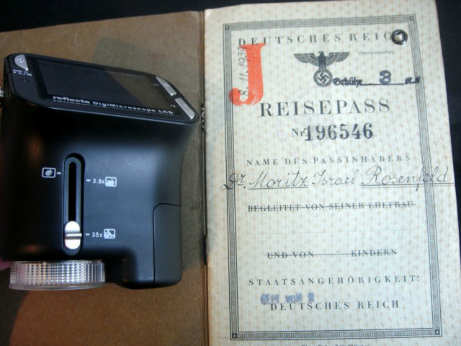 In the meantime, I bought a digital microscope (see picture above), which should help me to get a closer view of the documents. What do you think about the images I made? Quite interesting to get things so close. The magnification is between 4 to 40. The device is quite compact, has an SD-Card slot, the picture resolution is up to 2 Megapixel, a video is possible. With the software and the USB cable, you can view the live picture directly on the notebook. The price is rather low with 90$, and I believe this was a good investment. collectibles passport Swiss police

UPDATE: collectibles passport Swiss police
I had the chance to meet the passport specialists of the Swiss Cantonal Police. They have a special department for passport forgery in Zurich. I had four specimens with me (the “J” stamped passports mentioned above). First of all, I have to thank the passport forgery team, which performed this “inofficial analysis” as goodwill. They checked the paper, watermark, stamps, print technology, and also did some tests with different light waves. There were no indications of forgery or alteration of the documents. So I can clearly say these documents are genuine. By the way, it was impressive to see how their laboratory is equipped. collectibles passport swiss police