SGM Herbert A. Friedman (Ret.) made a nice article and summary of these documents. Here is a brief introduction and please visit his website at   http://www.psywarrior.com/GermanSCP.html to read the full story. 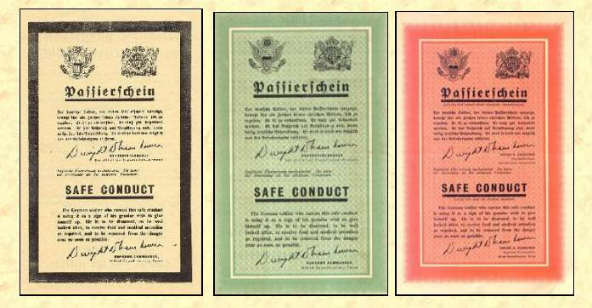 By the time the United States entered World War II in December 1941, the British, French and Russians had already printed and dropped a host of surrender leaflets on the German Army. The leaflets were of different sizes, colors, texts, and even the surrender instructions were different. There was no overall guidance, and certainly no uniformity. This all changed with the arrival of American troops in the United Kingdom and the strong alliance between the U.S. and British psywarriors. For the first time the two allied nations worked together to prepare a standardized safe conduct leaflet that would be exactly the same wherever used. The final version of the “Passierschein” has been called the most effective single leaflet of the war. It was considered so powerful that in 1944 the Allied Supreme Headquarters issued a directive forbidding reproduction of the safe conduct pass on other leaflets. They wanted to protect the authenticity of the document.

How did this leaflet evolve? What were the intermediate steps and what changes were made? This is the story of the most effective leaflet of World War II.

The story of the “Passierschein” (“safe conduct pass”) for Germany is interesting because of the alleged belief on the part of the Allies that the German officer or soldier would react in a positive way to an official looking document. Therefore, the Americans and British collaborated to produce a fancy official document bearing national seals and signatures that would rival a stock certificate. They produced the leaflets late in the war in various formats with different code numbers.

Paul M.A. Linebarger mentions the theory in Psychological Warfare, Infantry Journal Press, Washington D.C., 1948. He says:Germans liked things done in an official and formal manner, even in the midst of chaos, catastrophe and defeat. The Allied obliged, and gave the Germans various forms of very official looking ‘surrender passes.’ One is printed in red and has banknote-type engraving which makes it resemble a soap-premium coupon

Celebrity Passport Auction Results Update: The latest auction results were two US passports of Musician “Little Richard” from 1974 and 1976, which ended at $26.000 and $19.000 (incl. buyers premium)! Astonishing results, which I didn’t expect to see, and the…

Galeazzo Ciano – Foreign Minister of Fascist Italy – Diplomatic Passport Galeazzo Ciano, dei conti di Cortellazzo, was born on 18 March 1903 at Leghorn, the son of Admiral Costanzo Ciano, an Italian hero of World War I and an…