As I just learned from my friend Avi, Israel has a new system of Border Control Clearance and is not stamping your passport any more when entering or leaving the country. Instead you will get a so called “Border Control Clearance” – Slip as shown. This procedure is introduced since end of 2013. If you have any evidence in your passport of having visited Israel, you can be denied entry to Lebanon, Syria, Yemen, Iran, Libya, and Sudan. I’ve read of potential hassles in UAE, Saudi Arabia, and Kuwait and other Arab states. (FYI – Jordan and Egypt do NOT have an issue with Israeli passport stamps).

Traveler reports indicated that as of January 2013 Israeli border agents were not stamping foreign passports but rather using loose-leaf visas. This would solve the Israeli stamp dilemma, but there are still issues of other stamps from the neighboring countries — be sure to read that matter below. By the end of 2013, Israeli immigration officers were issuing a separate sort of visa/ID card, generated on site from the photo in your passport.

Prior to this, travelers needed to request that Israel does not stamp their passports. The immigration agent used to give you a short Form 17L to fill out. They wanted a good reason. 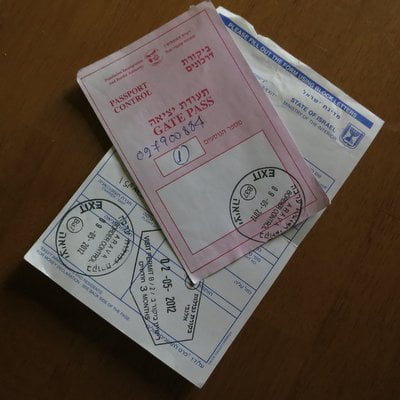 Jordan and Egypt do not have any issues with such a thing, but are worthy temptations and easily accessible from Israel by land, so you can head there during, after, or before your time in Israel.

But wait, you say: wouldn’t the Lebanese (or whoever) be smart enough to know that if you left/entered Jordan at King Hussein bridge, Sheikh Hussein bridge, or Aqaba that Israel is the only thing on the other side??? Yes, but Jordan can stamp your exit on a separate sheet of paper too. Jordan did this for everyone and without asking. If you are not told to fill in your basic details (name, passport number) on a slip of paper, then you should mention it to the agent before something gets stamped into your passport. At Aqaba the Jordanian border agent don’t stamp a passport but you need to request the form. (There is a free Jordanian visa in Aqaba, FYI.)

Just be sure to make your intention clear before handing over the passport. Be careful about getting the forms stamped and you should have no evidence of having visited Israel at all. It’ll be like the death of Bobby Ewing on the drama Dallas. It was all just a dream; it never really happened. (But if the Lebanese search your bags and find shekels, Lonely Planet Israel, bus ticket stubs, Jerusalem photos, you will still get sent packing.)

Personally I was in 2008 the last time in Israel and got my passport stamped. Maybe such a passport/stamp will be one day a rare collectible…

Looking for something special?

Drop me a line, I can support you.